I talk to Emma Cloney and Dale Brown about their musical connection, their songwriting process and their thoughts on the folk/roots music scene in Winnipeg and Canada as a whole.

A chance meeting at an event organized by Emma Cloney brought her together with fiddler Dale Brown and started the duo that is now known as The New Customs. Emma elaborates, “It was an event called the Prairie Kitchen Party at the West End Cultural Centre in Winnipeg. Dale happened to be one of the artists who was brought in to perform. We had a great time and the music was fantastic. Afterwards I realized that the musical blend between us seemed really good. We casually talked about playing music together and we didn’t really think that much more of it until I had an offer for a Western Canadian tour.”

She was asked with whom she wanted to tour and Dale’s name was the one that she mentioned. She says, “I sent Dale a text message afterwards. It read, ‘Hey! I hope you wanted to be in a band with me. We’re a band now!’ ”

Both members of the duo have different musical inspirations and influences, but those disparate elements only add to their musical blend. Dale points out, “My background is in Irish fiddling and some bluegrass. Oliver Schroer was a huge influence on me as well. In terms of songwriting, we both share some common interests like the music of James Keelaghan.”

Emma continues, “I’ve been a singer/songwriter for a long time.  I’ve always tried to write authentic story songs. Dale and I share a strong Celtic influence, but I wasn’t sure how our music would turn out. We’ve developed our own sound with a strong bluesy flavour and Celtic influences that are interwoven throughout without being forced or uncomfortable. It has a beautiful, cohesive sound.”

The process of songwriting can start in several ways for Emma and Dale. Sometimes their approach involves writing a central phrase or line.  Dale elaborates, “For example, we have a song entitled One More Mile. We started with just those three words. We ended up brainstorming ideas from there and picking the best lines from each other. I can’t even remember who wrote which lines.”

He adds, “Other times I’ll come up with an idea for a line, send it over to Emma and that will set off a forest fire for her and a day later she’ll have written an entire song from that one line.”

The process of co-writing songs is something new for Emma. She says, “Writing music is a very intimate and personal process. It requires that you be vulnerable and possibly foolish. In order to write with someone you’ve just met, you have to take a leap of faith. You have to be willing to be foolish in front of that person, so that you might have the chance to create something good.”

Emma goes on to say, “It’s a dynamic that doesn’t work for everyone. I’ve seen co-writing go terribly wrong, but in our case things have gone right. Sometimes we just look across the table at each other and go, ‘That’s the one, that’s the one!’ and our audience has responded in the same way.”

When asked about challenges for the band, Dale laughs and says, “It may sound trite but we don’t have a lot of challenges. It may sound ridiculous because of the amount we’ve accomplished in that time, but we’ve only been a band for 4 months. At this point, it’s been an absolute whirlwind of writing songs, recording songs, playing festivals and going on tour. “

Emma chimes in, “Another thing which we nearly forgot was a challenge because we overcame it so efficiently was the fact that I have another career as a nurse. Nursing is not for the faint of heart especially if you do it full time. We decided that we’d work the band’s performances around my schedule, but we’ve done it so well that it hasn’t come up as a challenge.”

There are broader challenges in the music industry that Dale mentions. He says, “Music is changing, media is changing and how people take in music is changing. As far as that challenge goes, it’s not anything daunting, but it’s fun to look at how people are taking in their music.”

He adds, “In the past, when people were listening to whole albums, they might hear one song off of an album on the radio and buy the album based on that song. You’d get two or three good songs, a few average songs and a couple that were duds. Now with playlists and streaming, you can’t afford to have a dud!”

Both Emma and Dale are full of praise for the folk/roots music scene in Winnipeg and more broadly in Canada.  Emma elaborates, “One of the things that got said to me a lot when people heard my songs was that I should pack up and leave Winnipeg for Austin, Texas. I was listening to CBC radio and I heard an interview where they mentioned the fact that the highest percentage of working musicians in Canada live in Winnipeg. When you travel and you come back home, you realize what a rich music community we have in this ‘little big town’.”

Dale continues, “The folk/roots ocmmunity across Canada that I’ve experienced has been so supportive. You go to festivals and it’s like hanging out with your friends.  The Winnipeg music community, especially the folk/roots musicians and songwriters, is so behind anyone doing something new.  Everyone’s talking about it, supporting it and asking how they can help.”

While Dale has been a full time musician, Emma has balanced her musical career with her nursing career, but now the balance is shifting towards music. She says, “I’ve now transitioned to being a nearly full time musician while still nursing on a casual basis. We’re now able to put this expansive amount of energy into one project individually and collectively. We’re going to see how far we can really take it. “

The band has plans for touring widely in the future according to Dale. He says, “We’re seriously thinking about how to make a European tour happen for late 2017 or 2018. We’re also going to both sides of Canada in the next year. It’s nice to use music as a way to look at a globe and decide where we want to go.”

There is also a full-length album in the works for early 2017.  Dale adds, “We want to continue to work with our fellow artists and continue to gain their respect and friendship. Record deals don’t exist nowadays. There’s no golden ticket, so you just have to keep trying to put out some great music.”

When it comes to inspiration, Emma finds it within the music that she and Dale are creating. She says, “The feeling and the rush you get from sharing, creating and making music can’t be beat. When you find somebody who makes all of the music you create even better, it’s pretty much a wonder drug.”

For Dale the inspiration comes from music being the only thing he’s ever wanted to do. He says, “It sounds kind of cheesy but it’s who I am and what I do. I’ve had other jobs in the past or looked at possible careers but there’s never been a moment of considering not playing music as part of my life. In terms of what inspires me to keep creating is that music has such a sympathetic effect. There’s such great stuff being churned out all the time across the world that, as a musician, if you’re not being inspired, maybe you’re doing something wrong.”

To learn more about The New Customs, please visit them here.

This profile is based on an interview conducted and recorded on August 16th, 2016.

You do a great job of finding and introducing new talent to us. Thanks 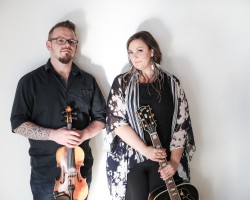