The Sweet Lowdown started as a duo between Amanda Blied and Shanti Bremer in 2007. They met through mutual friends in the Victoria music community and found a natural musical chemistry. They toured for a while before deciding they needed a full-time fiddle player in the band.

Amanda Blied takes up the story and says, “Miriam joined the band after we did a show together in the spring of 2010.We enjoyed the process of working with her, liked her sound and asked if she wanted to join the band as a full fledged member. She was game.” Since that point, the band has recorded an EP called ‘Live Off The Floor’ in 2007, before Miriam Sonstenes joined the band, and recorded three full length albums since then with her: The Sweet Lowdown (2011), May (2012) and Chasing the Sun (2014).

The band’s sound is rooted in acoustic music. They draw from traditional bluegrass, old time and Appalachian music but they aren’t constrained by those styles. Blied explains, “Even though we love those genres, increasingly we write music that has an acoustic sound with all kinds of influences. We let our creativity flow so now we might do stuff that’s more New Grass style or more chamber grass or even just more folk or pop influenced. We follow our muse and push ourselves and our instruments.”

Songwriting for the band often begins with each member bringing music that they’ve written to the table. They collaborate on arranging and finalizing the music.  Blied says, “We’ll solidify harmony parts or add a bridge to a tune that needs one. Often our material is quite done and we don’t do a lot of wriitng from scratch together. It could change because we’re open to exploring that with each other, it’s just a matter of making the time to delve in together into that raw creative place.”

Topical songwriting is an important part of what The Sweet Lowdown does. They explore current themes in their music as Blied points out. She says, “Our music is inspired by where we live, it’s inspired by the places we’ve traveled and it’s inspired by the salient issues of our time like growing environmental awareness and the dramatic effects of climate change.”

The band has developed a working dynamic that they find comfortable. They made a conscious decision to tour in a way that allows them to prioritize their personal physical and mental well-being while still enjoying the benefits of playing live music. This is driven by the fact that The Sweet Lowdown is meant to be a long-term project.

The shared nature of the band’s musical output is something that Blied remarks on. She says, “Working in the band is special because it’s a shared endeavour. It really is three people coming together and something happening that’s more than the sum of its parts. It's equal when we make an album because everyone contributes original material to the album. We tend to have quite an organic process to recording. We just bring up the songs we like and find a good mix that flows well on an album.”

Blied’s view on the current state of the music business is mixed. On the positive side, she points to all of the music being made in North America and says, “It’s really astounding and inspiring that there’s so many people making great music. One of the best things about touring is getting to hear the diversity that’s going on.”

There are a number of challenges that Blied mentions when it comes to the music business. The first challenge is the diminishing number of venues to hear live music. Blied says, “Where we live in Victoria B.C. there’s very few venues. A bunch in the last years have cancelled having regular live music. The rates of pay have just gone down. Professionally you can’t afford to gig any more because people are not willing to pay musicians.”

Another major issue for musicians are online music streaming services in Blied’s view. She says, “The streaming services  use content creators and don’t pay them for their music when they play it. I see that being a major problem in the long run. The numbers of people making music and the diversity of music is going to go down as people can’t make a real living from it.”

In the future, The Sweet Lowdown has a fourth album in the works. They are also planning to do more touring. Blied points out, “We want to continue to strike a balance between traveling with our music and being able to work in our region as well. We just want to travel more in a way that’s healthy and sane. We want to truly make a livelihood and get to see the world.”

She adds, “We like being exposed to other kinds of music and visiting hotbeds of real musical creativity in Canada. It really feeds our creative process and helps generate more music.”

The sheer passion for making music is where the band finds motivation. Blied explains, “We just can’t really live any other way. We love teaching and sharing music because passing on skills is really important. Music is the fabric of our life: It is part of our work and a part of our healing.. It’s such an intrinsic part of us that I just don’t think that any of us could do it any other way.”

For more information on The Sweet Lowdown, visit them at their website here.

This interview was conducted with Amanda Blied via telephone and recorded on April 26, 2016. 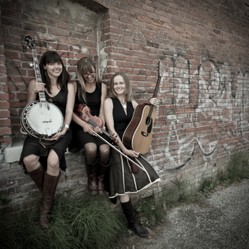