I talk to Ten Strings and a Goatskin's guitarist, Jesse Périard, about the band's musical roots, their love of innovation and how they keep inspired to make music.

The members of Ten Strings and a Goatskin had already been making music together for eight years before they made it their livelihood. Jesse Périard is the band’s guitar player. He explains, “We started off as a band in high school. Rowen and Caleb (Gallant), my band mates are brothers and they grew up with music on both sides of their family. They’ve been playing their instruments since they were about six years old, as have I. I met them when we went to high school together.”

He adds, “I’d never played traditional music before so the boys kind of taught me the basics that I’d need. We started playing here and there before things took off. We got a name, we got our own band account, we got some tours going with some agencies and now we’re doing this as a full time job.”

The roots of the band’s music lie in the traditional music of the east coast of Canada and Québec but they're moving the music in new directions. Périard says, “We’re big fans of traditional music but we’re also very progressive! We're always up for trying new ideas and different ways of approaching the music. A lot of our favourite bands are doing the same thing. We really focus on very specific arrangements for songs and making them very different from each other.”

Each band member contributes a different musical element to the overall sound of the band. Périard says, “Rowen has been playing fiddle music since he was very young and he’s always coming out with new tunes and melodies. We’re always down to learn them. As a guitar player, I focus more on chords.  We’re all really big fans of arranging music. We like to make an ABAB song into more of a story and that’s where the arrangement comes in. Caleb is a really great songwriter and all of the original songs on both albums were written by him.”

The experience of recording their latest album was something that Périard (and the rest of the band) truly enjoyed. He says, “I think I speak for all of us when I say that the recording process for our latest album was probably one of the best experiences of our lives. We recorded it in a little town in Québec called Joliet that’s known for its amazingly talented musicians. We wanted them to be a part of the album.”

He continues, “On top of that we got to work with Leonard Podolak of the Duhks. He came all the way from Winnipeg to record with us. This was his first ever producing gig and it was incredible. He really put all of his mental energy, effort and time into this album. You can really hear how much it affected the sound of the album. We honestly consider him a fourth member of the group.”

Like any band, Ten Strings and a Goatskin have faced a variety of challenges. Périard says, “We’ve gone through ups and downs but we’re always working to better ourselves musically and as a business. Whenever we have these challenges, we have a system that we’ve grown into where we have to be honest and approach these situations as professionally as we can.”

The band takes great pride in coming from the east coast of Canada. Périard says, “We’re super proud of the music culture especially on the east coast and P.E.I. in particular. There are four or five roots bands from P.E.I who are touring the world now. We’re incredibly proud to be part of this awesome community of people.”

In terms of their future plans, Périard says they’re taking things one day at a time. He explains, “The plan for the next year or so is to continue touring. We already have some dates lined up for 2017. We’re having a lot of fun. We honestly don’t know where we see ourselves after next year but we’re just happy to keep doing this. “

Inspiration and motivation is found in other musicians for the band. Périard points out, “We get inspiration from friends we meet on tour and these other bands from different countries who share their stories and their music with us. It gets us so pumped up and lively. It really motivates us to keep going, practicing and working hard.”

For more information on Ten Strings and a Goatskin, visit them here.

This interview with Jesse Périard was conducted and recorded on August 4, 2016. 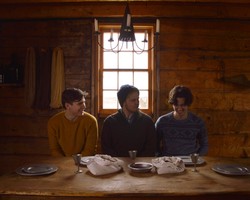