International View of the Tea Party

Outside the United States most people are baffled by the racist, homophobic, ignorant extremism of Tea Party followers, who number 22 percent of the American public 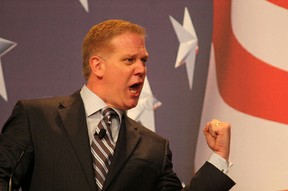 In October 2010, the Pakistani magazine Dawn accused the Tea Party and other “right-wing zealots” of unleashing a “venomous discourse” against Islam. It described talk-show host and Tea Party favourite Glenn Beck (left) as a “bigoted rabble-rouser” who accuses President Barack Obama of being a “closet Muslim.”

A few months earlier, the German magazine Spiegel also took on Glenn Beck in somewhat more measured tones “he spreads a message of fear and dread of a new America…It is a country of poverty, deprivation, and an omnipotent government, a cross between the Soviet Union and Hitler’s Nazi Germany.”

Writing for The Australian Broadcasting Corporation (March 2013) Chris Berg comments that “Our ideas of the Tea Party are pretty entrenched. Either you think that the Tea Party is a white, racist, gun-toting, revolt of the middle class, or… well… in Australia it’s not clear there is an alternative view.”

The French newspaper La Monde (October 2010) commented that the Tea Party is filled with conspiracy theorists who “wish to be left alone, to live as before when everything was going well, when America embodied the Anglo-Saxon status quo, when the Taliban were on the CIA payroll, and when neither the Chinese nor al-Qaeda opposed the hegemony of Uncle Sam.”

And, long-time Canadian political analyst Geoffrey Stevens writes (October 2013) “The Tea Party began as an amusing diversion on the lunatic fringe of the political landscape.” Now, he writes, it “could destroy the spirit of goodwill, consensus, and willingness to compromise that make it possible for democracy to function.”

BBC Documentary of the Tea Party 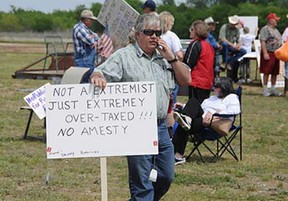 Judging people by what they say is a pretty sound method of getting a handle on their character and intelligence. Of course, everybody is prone to a slip of the tongue from time to time but Tea Party folk seem to have cornered the market in saying ridiculous things:

“You could even argue whether being a Muslim is actually a religion, or is it a nationality, way of life, cult, whatever you want to call it.” Lieutenant Governor Ron Ramsey of Tennessee, 2010

“If it’s a legitimate rape, the female body has ways of shutting that whole thing down.” Todd Akin, Missouri Republican Representative, 2012 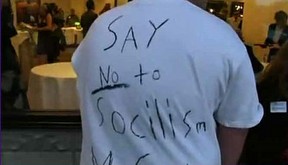 “Our nation was founded on violence. The option is on the table. I don’t think that we should ever remove anything from the table as it relates to our liberties and our freedoms.” Stephen Broden, Tea Party-backed Texas congressional candidate, 2010 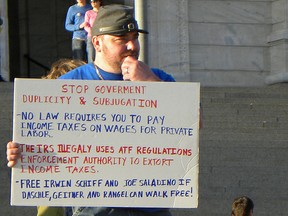 “I absolutely do not believe in the science of man-caused climate change…It’s far more likely that it’s just sunspot activity or just something in the geologic eons of time.” Ron Johnson, Wisconsin Republic Senate candidate 2010

These are not rank-and-file members who take their poorly spelled placards to rallies; these are the party’s best and brightest offered as candidates for positions of political leadership.

Danger of the Far Right 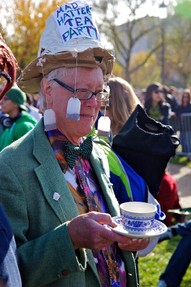 Political movements of the far right feed on the disillusionment of people whose lives are not going as well as they’d hoped. Their supporters need someone to blame for their disappointments and the demagogues who lead them offer up targets, usually people with darker skins. And, they propose crude solutions to complex problems that simply will not work.

France has its Front National founded by Jean-Marie Le Pen. Jörg Haider was the long-time leader of the Austrian Freedom Party. In the Netherlands Geert Wilders has had some success at the head of his Party for Freedom. The neo-Fascist National Front in the U.K. has had a minority appeal.

But, none of these or other extremist groups have been able to hold the democratic process hostage as the Tea Party has done in the United States. One disturbing aspect of the Tea Party’s success is that it is based on misinformation and outright lies such as: 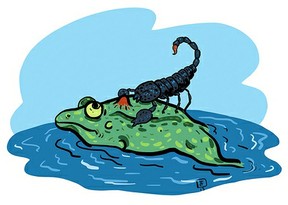 Why do so many people believe these falsehoods? Let’s turn to Michael Lind at Salon for an explanation: “The answer is that members of the right-wing counterculture are brainwashed - that is the only appropriate term - by the apocalyptic propaganda ground out constantly by the conservative media establishment.”

Facts and rational argument cannot penetrate the bubble of certainty in which the true believers of the Tea Party live.

I fear that "Those whom the gods wish to destroy they first make mad."

I think you may be painting a more one-sided or monolithic picture of the tea party than is actually truthful. I think you are making a lot of generalizations that break down if you start actually examining specific tea party groups, and the people who are active in them.

There are quite a few different groups that call themselves "tea party", and not all of them adhere to the extreme views, and have the problems with racism and xenophobia, that you mention. I did some research on tea party groups a while back, and I found that they are pretty diverse.

Some groups, like the Tea Party Express, seem to be riding the "tea party" energy, but operating primarily within the mainstream Republican party and mainstream "conservative" views.

Some groups, like the Tea Party Patriots, deviate considerably from the mainstream Republican party views, and seem to focus a lot on fiscal responsibility. Other groups, like the National Tea Party Federation, has taken active efforts to root out racism and political extremism.

Then there are the groups with more extreme stances. The Tea Party Nation would be one of these. To give you an idea of how extreme, the founder in that group has advocated to reinstate the requirement that people need to own land in order to vote.

The media outlets quoted are not “one-sided to say the least.” I chose them carefully from the most respected centrist and objective journals. These are no rabid leftist publications whose editors are foaming-at-the-mouth Communists. They all provide thoughtful analysis of the news. It is virtually impossible to find praise for the Tea Party outside of its distorting cheer leaders such as Fox News.

I’m truly puzzled about where the accusations of hatred come from. I expressed no hatred for Tea Partiers. Certainly, I criticized their beliefs, because they are largely based on errors and misunderstandings of facts, but that is not fomenting hatred.

I do not hate Tea Partiers; I feel pity for them, because they have been fed a steady diet of error-filled cant by people who have their own agendas to peddle. Many Tea Party members have become delusional, which is defined as “a belief held with strong conviction despite superior evidence to the contrary.” You only have to listen to interviews of people attending their rallies (and I’ve listened a lot) to hear a barely articulated rant based on some half-recalled, half-baked diatribe they’ve heard from Sean Hannity, Rush Limbaugh, or Ann Coulter.

If you want hatred I give you Sharron Angle, Tea Party favourite and senatorial candidate in Nevada (she got 45 percent of the vote in 2010). After her defeat to Democrat Harry Reid she said, “You know, our Founding Fathers, they put that Second Amendment (gun ownership for the benefit of non-Americans) in there for a good reason and that was for the people to protect themselves against a tyrannical government. And in fact Thomas Jefferson said it’s good for a country to have a revolution every 20 years.
“I hope that’s not where we’re going, but, you know, if this Congress keeps going the way it is, people are really looking toward those Second Amendment remedies and saying my goodness what can we do to turn this country around? I’ll tell you the first thing we need to do is take Harry Reid out.”

It is wrong to conflate my criticism of the Tea Party as an attack on conservatives, because I did not lump “everyone in with a few lunatics.” In many places in the article I point out that those in the Tea Party are “extremists,” “zealots,” “far right.” They are not mainstream thinkers, and I made no suggestion they were. Certainly, their antics have tainted the more centrist and moderate elements of the Republican Party, but that's an issue for the party to deal with. There was a time when Republicans and Democrats could set aside their differences and work in a bi-partisan way for the common good. The stubborn intransigence of the Tea Party has made that impossible.

You speak of the media outlets from which I gain my information. Do you know which media outlets I use? What newspapers do I read? Which television channels do I use to obtain news? Which political party do I support? Of which other organizations am I a member? Should I rely on that wonderfully reliable source of news-Fox.

As a Briton I am conscious that America is a great ally and am grateful for your support and friendship,I respect the great man that you have as president. So I hate to see America going through this damaging shutdown enforced by ideologues who want to force their philosophy on the United States. I want better for my friends.

It's sad how people not living in the USA (and even many living here) view the conservatives of this country. Your information comes from media outlets that are one-sided to say the least. I am not a member of the tea party, but I am a conservative and I don't hate blacks, Muslims, and gay people. And I don't know people who do. Lumping everyone in with a few lunatics is not a fair view of what is going on in America. One thing you all do have in common, is a true hatred for those who do not believe as you, and you love to pass it on.

The article wouldibe hateful if Rupert were to have suggested harming Tea Party supporters in some way, for hate always intends harm. He did not do so, nor did anything he said indicate that he wished to harm them or inspire others to harm or hate them. To accuse him of hate speech is to commit the crime of political correctness, which uses accusations of stirring up hatred to suppress dissenting opinions.

From where I am, standing at a distance in Britain, the Tea Party supporters look very strange. They seem to caught in a delusional culture which presents a view of the physical and political world at odds with reality.

Bob Simpson
I would appreciate if you could be more specific. In what way is what I have written inaccurate?

This is not journalism at its best, not even at its worst. It's just hateful.

It's a nightmare.... I listened to a Tea Partier ranting in a restaurant last night, he LOUDLY explained why it is unconstitutional to pay taxes, and two seconds later lambasted the government shutdown because it stopped checks to the veterans and disabled.

It's impossible to argue with crazy.... so, many of us are just putting our heads down and hoping they run out of steam or self destruct.

Politics are often the source of complaints, and there is much to complain about. However, people rarely see the problems on their own side. Fairness requires a total look.
49%  9   3 RupertTaylor
US Politics

Extremists in the United States are in a self-proclaimed war with their government in what they say is a patriotic defence of freedom
Loading ...
Error!