My summary of "The Minister's Black Veil", by Nathanial Hawthorne, as submitted for a course in English Literature.

From the day the good reverend first puts it on, preaches a Sunday service, says goodbye to a parishioner at her funeral service, and marries a young couple in the evening, the story leaves so much to the reader to decide. A black veil, a veil of sin, of darkness, of evil; but what sin? Why live in darkness behind it? What evil is it hiding? This secret sin is as different for every reader of Hawthorne’s story as it was for the parishioners in Parson Hooper’s church. The veil stirs up emotions that perhaps neither the reader nor the parishioners are prepared to deal with, the reminders of the skeletons in our own closets, the things we too wish to hide from everyone, or the sins we try to forget with hopes that when judgment day comes, maybe all will be forgiven. Though Nathanial Hawthorne makes no effort to answer the question of what the point of Parson Hooper wearing a veil, this hasn’t stopped his many readers from speculating.

The parishioners are shocked one day when their good reverend Hooper suddenly comes to church service wearing black veil that covers his face. Everyone begins to wonder why, what he’s hiding, and they start to avoid him. No matter what happens, even the loss of his fiancé, Elizabeth, he vows to take the veil to the grave and he does, all the while allowing the people to wallow in their own judgments of the sins they can only speculate that he has committed, leaving them actually in judgment of their own lives.  “Let him who is without sin among you be the first to throw a stone…” (John 8:7).

No man or woman is without sin, not even a good reverend.  Interestingly enough, the day the reverend first chooses to wear the veil he is seen at a funeral, leaning over the corpse of a young woman, giving her the first and last glimpse at what is underneath.

“The clergyman stepped into the room where the corpse was laid, and bent over the coffin, to take a last farewell of his deceased parishioner. As he stooped, the veil hung straight down from his forehead, so that, if her eyelids had not been closed forever, the dead maiden might have seen his face. Could Mr. Hooper be fearful of her glance, that he so hastily caught back the black veil? A person who watched the interview between the dead and living, scrupled not to affirm, that, at the instant when the clergyman's features were disclosed, the corpse had slightly shuddered, rustling the shroud and muslin cap, though the countenance retained the composure of death.” (p.30-31)

It is easy to see here where one might have gotten the idea that the good Parson Hooper had some sort of connection with the lady.  Could this woman have been a lover of his? Or was she the one he committed a foul sin against? Had he molested her?  This is but a theory, an option, a choice on how to pass judgment on the character in this story, just as the people of the congregation does.

Engaged to a woman, Elizabeth, she begs him, "Beloved and respected as you are, there may be whispers that you hide your face under the consciousness of secret sin. For the sake of your holy office, do away this scandal!"  Even his own fiancé wishes him to prove the people wrong of their judgments and still the good Parson refuses to remove his veil.

"If it be a sign of mourning," replied Mr. Hooper, "I, perhaps, like most other mortals, have sorrows dark enough to be typified by a black veil."

"If I hide my face for sorrow, there is cause enough," he merely replied; "and if I cover it for secret sin, what mortal might not do the same?"

We are all guilty of things we dare not tell a soul, to a varying degree.  The veil urges us to look in review on our own reflection and remember our own sins before we judge the sins of others.  Parson Hooper’s strength is reminiscent of that of Jesus Christ, bearing the weight of the sins of his people, refusing to back down even when it tarnished his good name, and taking with him those sins to the grave.  Let the Minister’s Black Veil be a lesson to us all.  May it remind us that we are not perfect, that we all have a dark side, and that at times in our lives we have cast upon us undue judgment from those around us.  Let us all remember this tale when we stare questionably at anyone different than we are.  “Judge not, lest ye be judged” (Matthew 7:1). 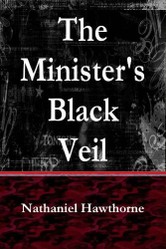