The Pre-Raphaelites Brotherhood: A Secret Society

They called it the Pre-Raphaelites Brotherhood. Formation of the brotherhood grew out of the artists reaction to the stagnate art in England. They referred to it as frivolous art and a debased form of history painting.

Raphael, and other History Painters of the Renaissance, considered the style the noblest form of painting. Classical History, Mythology and the Scriptures formed their ideas. Added to this in the 18th century, were the works of Dante, Shakespeare and Milton.

A dearth of new ideas in the 19th century motivated the Brotherhood to try something new. For too long, art students had been taught to reproduce art of the previous generations. Meaningless, boring art reigned.

In 1848, speaking to some contemporary artists, Millais called Raphael's style, "mannered, exaggerated and over-dramatic." The students replied, "Then you are Pre-Raphaelite."

Rossetti suggested "Pre-Raphaelite Brotherhood" (PRB) as a name for their group. The brotherhood signed their paintings "P. R. B." along with other insignia and swore to secrecy.

The Pre-Raphaelites had specific ideas in mind: They painted serious subjects in the light of day and as realistically as possible. They studied nature closely. This ended the practice of painting by rote. Today, it's called plein-aire painting.

Born in London on April 2, 1827, William Holman Hunt, an English painter, entered the Royal Academy Art School and rebelled against the founder, Sir Joshua Reynolds. Along with Rossetti and Milais he founded the Pre-Raphaelite Brotherhood and was the one to remain comitted to the ideals they represented. When Holman painted, it was attention to detail, vivid color and elaborate symbolism that gained him recognition. He used his natural instinct for marketing to ensure the public visibility and appeal of his work.

In the 1850's Hunt traveled to the Holy Land, so he could paint the religious works he loved with accurate topographical and ethnographical realism. He hoped to make the history and teachings of Jesus Christ available through his art. He produced The Scapegoat, The Finding of the Savior in the Temple and The Shadow of Death along with many landscapes of the region. He also painted many works based on poems like Isabella, The Lady of Shalott and The Eve of Saint Agnes.

Hunt built a house in Jerusalem, but returned to Englad later in life where he died on September 7, 1910.

The Art of William Holman Hunt

British painter and illustrator, John Everett Millais, entered this world on June 8, 1829 in Southhampton, England. Recognized as a child prodigy, he was accepted into the Royal Academy at the age of 11. In 1848, Millais, William Holman Hunt and Dante Gabriel Rossetti, gave birth to the Pre-Raphaelite Brotherhood (PRB) in the Millais family home.

Millais gained popularity, as well as controversy, during the PRB phase with such works as Christ in The House of His Parents (1850), A Huguenot (1852) and Ophelia (1852).  A Huguenot, the beginning of his popularity, depicts a young couple doomed because of religious conflicts. Millais often used this theme in his later works.

His technique of painting with attention to detail on the beauty and complexity of the natural world garnered him great public praise. His paintings of, Ophelia (1852) as well as other paintings, depicted elaborate pictorial surfaces and naturalistic elements.

After the PRB period died out, Millais turned to painting portraits and illustrating picture books. In 1896 he was elected as President of the Royal Academy but died later that year of throat cancer.

The Art of John Everett Millias

When Theodore and Flora Mander decided to decorate their new manor house, no-one was really that interested in the pre-Raphaelites.
If you love the Pre-Raphaelites, you'll love Jo Harrington's article about Wightwick Manor, a Victorian home in England where the Mistress of the house decorated with Pre-Raphaelite paintings.

The Art of Dante Gabriel Rossetti

Additional Reading and Art of the Pre-Rafaelites Brotherhood

Dante Gabriel Rossetti, born May 12, 1828, was a multi-talented artist. His accomplishments included English Poet, illustrator, painter and translator. He illustrated his own poems and those of his sister, Christina Rosseti, as well. He shared the family spotlight with his siblings Christina, a celebrated poet in her own right; his brother William Michael Rossetti and another sister, Maria Francesca Rossetti, an accomplished author.

As a co-founder of the Pre-Raphaelite Brotherhood (PRB), he served as an inspiration for a second generation of PRB artists and writers which included William Morris and Edward Burne-Jones. Rossetti's art conveyed sensuality and medieval revivalism. The poet, John Keats, along with the European Symbolists influenced his early poetry.

Sensuality and medieval revivalism flowed throughout his art. Rossetti's interest was always in the Medieval, especially Medieval Italian art and peotry. He adopted the stylistic characteristics of the early Italians.

Finally! A secret soceity that did cool stuff!! Art! :)

Oh! I miss those days when we would take the kids to museums. L.A. has some great museums.

This has inspired me to take my kids to an art museum this winter break. The kids love visiting museums. :)

Thank you Tolovaj. Yes, they were influential in children's illustrations.

I like work of Pre-Raphaelites too. They were also very influential in the field of children books illustrations.

You are welcome. I have fallen in love with some of the paintings since then.

I knew the term, but not what it meant. Thanks for a great introduction to the subject :)

Your welcome Jo. I appreciate the link you gave me. I have to remember to start doing that for everyone.

Your welcome Jo. I appreciate the link you gave me. I have to remember to start doing that for everyone. 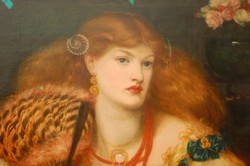