When a potential harm is ignored and left without remedy, they open themselves up for lawsuit. These harms are known as torts, and we are protected and governed by tort law.

People and businesses in today’s world have an obligation to others to keep them free from foreseeable harm. When a potential harm is ignored and left without remedy, they open themselves up for lawsuit. These harms are known as torts, and we are protected and governed by what is called tort law. Some types of torts are intentional, where a person intends to harm someone, examples include battery, assault, or fraud; negligent torts, where a person or business allows the potential for risk to exist by failing to exercise reasonable care, whether they are aware of it or not the problem still exists; there is strict liability or product liability, where the manufacturer, distributor, or installer of a defective product could be at fault; and nuisance, where the damage is impeding on someone’s (or a group’s) enjoyment of real property.

The four elements of a tort are: duty, breach of duty, causation, and damages.  Duty is the obligation of one person to keep the other free from harm.  Breaching this duty would then have to be proven to cause (causation) actual damage or injury to another.  If all elements are not proven than a tort has not occurred.  The person claiming to have received the injury or incur the damages (plaintiff) has the burden of proof.

The objectives of tort law are to protect people from harm, compensate individuals who incur harm at the expense of the person(s) responsible for preventing harm, and encouraging minimum standards of conduct to deter violation and future incident.

There is a local bar/restaurant I have stopped in many times over the years which is a great example for this article. I have noticed many issues here, as well as have many of the other patrons.  It seems that neither the current owner nor the owners before him (as it changes fairly regularly) have taken the time to fix many of the issues. Since then the overall care of the location has gone down considerably, as have the profits generated by the business (I can only assume).  There are a few issues that should be addressed as soon as possible, or the owner could lose a lot more than just his staff and regulars.

Tort #1 - Drain in the Ladies Restroom

Starting with the simplest and most inexpensive problem to fix, is the ladies restroom.  In the one lone stall there is a drain in the tile floor that is maybe 12”-15” from the toilet.  The drain cover has been loose for years, and for a long while was being taped down so it would stay in place.  In recent months the drain cover has disappeared, leaving a 2” diameter open hole in the floor.  This hole could easily catch a high heel and a customer could fall and be injured.

This open drain in the ladies room would be a negligent tort.  Even though it would likely be easy to prove that the owner is aware of this issue, as noted by the previous taping actions.  Being that there is only one ladies bathroom, every female employee including the GM would have no choice but to see the open hole each time they use the restroom, and they keep choosing to ignore the problem.

This would be so simple to fix.  Any employee could easily run to Home Depot and purchase a new drain cover for just a few dollars.  The problem would be fixed, and no one would be hurt. Why every member of the establishment continues to ignore the potential liability is beyond me.  I’ve often considered buying one myself and putting it in place for my own safety.

Another issue would be the improper installation of ceiling fixtures in the establishment.  Always running on high, the ceiling fans wobble.  They are either loose or not level, and customers joke that it looks like one could fly off any second and hit a customer in the head.

Additionally, while repairing the ceiling fixtures, the owner of the tavern would be advised to clean them.  The amount of dust that is on them cannot possibly be sanitary.  The particles likely fly into the beverages of the customers sitting at the high tables beneath them, and are being consumed as well as inhaled on a regular basis.  A standard cleaning regiment should be put in place for the new bar staff to follow.

The high tables beneath the fixtures appear to have been home-made with 4x4’s and plywood, and are not sturdy or level by any means.  They are higher than should be, and people naturally put their weight on them to help lift themselves onto their barstools.  When this happens, the uneven tables shift and drinks are spilled.

The cost of cleaning the carpets is the lowest concern in this incident.  One of the tables could easily topple over on a patron.  The above average size and composition of these tables implies that someone could really be hurt, and therefore the person who made the tables is subject to Product Liability.  The tables should have been built sturdier, and the establishment should have had them bolted to the ground to keep them from toppling over on customers.

The negligence of the establishment could be remedied by not only leveling the tables, but also to affix them appropriately to the ground.  If the owner wants to keep the ability to move them around, he should purchase tables that are wider than they are tall for a lower likelihood of them tipping over.

Additional table seating can be found outside the Tavern, in the back alleyway.  One of the previous owners of the establishment placed patio furniture there, and the smokers sit outside with their beverages. Cars do use this alleyway and someone could easily be hit, injured, or even killed.

The owner should remove the patio furniture from behind the establishment.  The owner cannot obtain an outdoor use permit because the back alleyway is a firelane.  He should not encourage people to go outside and sit in harm’s way by offering tables and chairs. By the establishment allowing the existence of the outdoor furniture/fixtures leaves much room for incident.  This seems to me to be gross negligence by the owner.

Located across the alley-fire lane in the grassy area is also an outdoor area with picnic tables and a brick fire pit/grill which inebriated customers are permitted to use at their own risk.  Allowing people to consume alcoholic beverages, and sending them out to cross an alleyway where vehicles drive through and then light an open fire is asking for incident.  And though the fire pit/grill area says “Use at your own risk”, allowing it to exist at all is creating such an alarming risk that it cannot be termed anything other than gross negligence.

Additionally, the brick fire pit should be torn down or bricked in and rendered unusable.  The establishment makes no money off of it, so its continued existence does nothing but create room for lawsuit.  Either way, there should be a proper crosswalk from the back door over to the grassy area by the picnic tables, and signs should be put up so that as vehicles near the corner of the building, they see that there is a crosswalk ahead and can slow down before they turn the corner and hit someone.

It is also imperative that the people accept responsibility for their own negligence.  Joint fault may exist, therefore tort liability would be shared as a percentage, and only that percentage for which the plaintiff was not responsible for could be received as damages.  If a person were to cross the back alleyway without looking and listening for a car coming, they could be partially at fault.  The person driving the car would also be partially at fault, especially if they frequented the establishment and knew to watch for people in the alleyway.  This creates a shared liability in case of injury. The bartender that served both the patron that was hit and the person driving the car might also be found at fault if they over-served them.

It is each person’s duty to be aware of their surroundings and potential dangers that may exist at all times. Alcohol dulls the senses and slows reaction time, making it all the more important to be aware of potential torts in a bar setting. 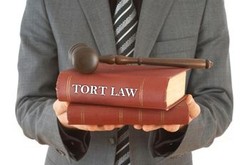 How to search for the best academic institution re your professional goals and interests, how to verify whether or not it is the place for you, and how to plan for the experience.
Loading ...
Error!