I talk to Luis Mario Ochoa about his musical passions, the creative process and finding inspiration.

Growing up in Cuba, Luis Mario Ochoa was surrounded by music. His father was a musician in a trío romántico and he started his son playing the guitar when he was 7 or 8 years old. Ochoa says, “I started practicing quite a lot at home and apparently I took it too seriously. He sent me to a music conservatory so I could get a good background. I studied classical guitar there for thirteen years.”

Ochoa’s classical guitar education was complemented by the informal education in popular music that he received from his father at home. He continues, “Once I finished school, I didn’t want to do classical music even though I love it very much. I did it for a while but it wasn’t in my soul. Popular music was in my veins.”

After graduating from the Instituto Superior De Arte in Cuba in 1987, Ochoa came to Canada. He started his first band soon after that combined his classical training with the experiences he’d had doing Latin jazz jams while he was in Cuba.

Along with his father’s musical influence, Ochoa cites the Cuban band Irakere and a Brazilian musician named Eumir Deodato as people who helped shape his musical vision. He says, “The music of Irakere was my Cuban jazz guide. Eumir Deodato's music is a fusion between Brazilian music and a touch of Cuban music. My music is still marked by the two of them. Of course, I have my own sound but I would say those two influenced me deeply.”

Creativity flows like water for Ochoa. He explains, “It’s a very fluid process. Mostly my music isn’t complex. It might get a little more complicated when I arrange for Cimarron because there’s four or five horns there.  Most importantly I need communication between myself and the audience. If I don’t touch my audience either with a happy song, a sad song or an intellectual song then I’m not doing my job.”

He adds, “I’ve seen many people who are great musicians but when they perform, it’s like there’s glass between them and the audience. You have to be a communicator and not just with your music. Talk to them, even if they’re from another planet, just a smile and a gesture from you will tell them a lot.”

One of Ochoa’s concerns about the music industry has been the decline of quality. He talks about Cuban music and says, “I don’t know what’s happened to the music in Cuba. We have such rich roots but all of a sudden everybody wants to do music like reggaeton. There are some people that do have a message in that music. I hear what they’re saying but I don’t like the style.”

His other major concern has to do with the large music companies. He explains, “The music business is the business of selling now. They don’t care about quality, they only care about the numbers of downloads they can sell. If you have those people in charge, it’s difficult.”

Ochoa’s main goal is to keep creating music of quality. He’s currently in the pre-production stages for a new CD with his quintet. The band includes well-known musicians like pianist Hilario Duran (who worked with Arturo Sandoval), Peruvian percussionist and vocalist Luis Orbegoso and Cuban-born conga player Jorge Luis Torres “Papiosco”.  Ochoa says, “We’re doing a homage to perhaps the best known Cuban composer outside of Cuba: Ernesto Lecuona. We’re paying homage to him because he created such fantastic compositions. He was an amazing pianist and an amazing lyricist.”

Listening to a wide range of music is one of Ochoa’s main sources of influence. He also talks about the experiences he had while teaching at Humber College and explains, “The students who were interested in music kept me on top of everything! They were always giving me new music to check out and that really kept my interest alive!”

To learn more about Luis Mario Ochoa and his musical projects, please visit his website here.

This profile is based on an interview with Luis Mario Ochoa conducted and recorded on May 27, 2016. 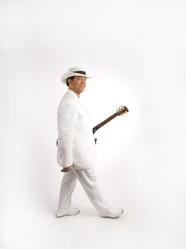