The Lemon Bucket Orkestra started out as a side project for Mark Marcyzk (the band’s violin player and lead singer) and three other members of the current band before taking on a life of its own. Marcyzk says, “Four of us were part of another band called Worldly Savages which was a gypsy punk band. The four of us were really into Eastern European traditional music so we started learning some of the songs to play at after parties.”

He continues, “Eventually we had to find another venue for what we were doing. We started to do shows with other bands that we liked who were also doing traditional music from other places in the world. Basically, along the way, we found other musicians who loved the music and the energy of the band. The group grew out of that.”

The band’s initial repertoire was established by Marcyzk while he was living in Lviv, Ukraine. Marcyzk says, “I met a lot of musicians both inside and outside of Ukraine that were sharing klezmer music, Roma music and music from the Balkans. I really got interested in it, I started listening to it and playing with everybody that I could. Eventually I brought all of the pieces that I really enjoyed back to Canada.”

As the band has grown, they’ve traveled of their own accord. Marcyzk explains, “We went to the Balkans and Romania. Everywhere we went, we had people share the most well-known folk songs from their region. We got into this nerdy vibe about finding as many different versions of a song as we could and seeing  how people were interpreting the song. We wanted to be a part of that conversation.”

A major aspect of the band’s live performances is their variety and diversity. They  don’t go on stage with a set list. Marcyzk says, “We have a huge repertoire of songs so we see how the audience is feeling and how we’re feeling then we decide what we’re going to play. That’s why no  concert is going to be the same for us.”

Arranging music is an organic process for the group. Marczyk says, “Usually somebody comes in with a specific idea and then we see what might work and try a whole bunch of different things. Sometimes it works right off the bat, sometimes it takes us years. You never know how it’s going to go!”

Initially Marczyk found himself in the role of music director for the band. He explains, “At first it started with me really listening intently and telling each section what to play, what voicings to use,  which chords to play and how the melodies were to be played.”

Now, Marcyzk says, “Everybody has their own take on what they’ve learned about the music. We keep it as close to the traditions as we can but we certainly move outside of them too. Part of what makes our band unique is how we use all of our influences from such a distant place while still giving the music a voice that’s really appealing to audiences here.”

Each album the Lemon Bucket Orkestra has recorded has it’s own flavour. Marcyzk feels that the first album was polished but relatively low energy. He considers it a good documentation of where the band was at when it was recorded. The second album was recorded when the band returned from their tour of Romania. Marcyzk says of it, “We were completely on fire, we were burning through the songs super fast, they were super tight and it was very high energy. It was the first album that was nominated for a Juno.”

Their third album was an emotionally intense project for Marcyzk. The band recorded it while the revolution in the Ukraine was happening. Marcyzk says, “I had been part of the revolts when I was in the Ukraine. My wife was still there as the revolution  developed into a war. She was traveling and playing for soldiers on the front. We were wrestling with all of that while touring beautiful Canada and playing festivals where there were all these happy people. We recorded that album in a barn and tried  to capture all of the emotions we’d experienced while we were on tour.”

One challenge for the band is the strong personalities of its members. Marczyk says, “We really pour everything out during our live performances. Part of doing that is being able to access a range of emotions that really bring people in so you end up wearing your emotions close to the surface.”

He adds, “I understand the anti-commercial vibe of it and wanting it to connect on a more personal level but we think that tradtional music needs to demand a space for itself within the general public. We should be proud of what we do. That doesn’t mean that every single band needs to be like Lemon Bucket and shut down street corners, get people to scream in satisfaction and sing in languages they’ve never heard of before but we strongly believe there needs to be a space with that somewhere within the Canadian musical culture.”

In the future, Marcyzk hopes the band will travel more widely and bring their music to more people. He says, “Musicians will say that it’s all about the music and that they’d play whether there was only one person in the audience or ten thousand people. We live by that as well but for us the goal is the bring this music to a wide audience which is why we’re excited to play at the bigger Canadian folk festivals where we’ll have the opportunity to bring Eastern European folk music to an audience who won’t have heard it before.”

While admitting that each band member would likely cite different sources of inspiration, Marcyzk outlines his own personal inspirations. He says, “Exploring the music and finding a voice is inspirational. I’m inspired by the connection with other musicians that you get through that exploration. The audience is a big part of it for me. It’s about welcoming an audience into a conversation with the music.”

For more information on the Lemon Bucket Orkestra, please visit their website here.

This article is based on a telephone interview with Mark Marczyk conducted and recorded on June 27, 2016. 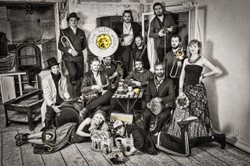 Linda Kitchin plays a diverse range of music from bluegrass to tango to Eastern European folk music along with her musical collaborator Darcy North in a band called Fromage Chaud.
Loading ...
Error!