1001 Nights, for many more known as Arabian Nights is one of most popular collections of fairy tales of all times. But in its original form it is not appropriate for kids...

The collection of stories from 1001 Nights is the most influential book coming from East in the Western world. Its fascinating scenery and colorful characters inspired thousands of artists, charmed millions of children and adults but most of them never get past the few of the most popular titles.

So here we are - with my selection of top ten facts about 1001 Arabian Nights!

(Intro image by George Barbier, all images are in Public Domain)

The title of the collection is misleading

1. In USA and Great Britain these tales are known as Arabian Nights (sometimes Arabian Nights Entertainment) but many of them have nothing to do with Arab countries. The collection consists of fairy tales, fables, riddles and verses from large area of Asia and Africa, with India probably being the biggest contributor. The main story which serves to present all the others, for instance is going on in Persia. 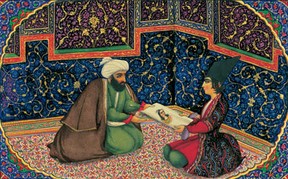 2. In Europe Arabian Nights are mostly known as 1001 Nights. Many people believe Thousand and one is the number of the tales in the collection but this is also not true. 1001 Nights only gives a time frame in which stories are told by Scheherazade to her husband. He wants to kill her as all his previous wives after the first wedding night but decides to postpone the execution because he wanted to know how story ends (and she always starts the next before he notices the first one is finished).

There is no definite answer to the question "How many stories are in 1001 Nights?". There are versions with only a dozen tales and versions with several hundreds available. We also have a problem to identify which are the 'original' tales, which came into collection from other sources and which are not a part of folklore at all.

And of course pretty complicated narration with frames, unfinished stories and two or three variations of many of the stories don't help either...

Which title suits you better?

The structure is unclear

But the frame format of Arabian Nights is also one of the collection's signature!

3. Some stories in Arabian Nights are more than thousand years old and some were added only in 18th century. We can also find very different reasons why the king doesn't kill Scheherazade, but we always have a happy ending. He spares her life and she manages to soften his hardened heart.

5. In 1001 Nights everything is mixed. We find different fiction genres with characters and events based on real people and real places but sometimes in weird interactions. We have magicians, talking animals, djinns and even robots!

6. A huge part of 'original' 1001 Nights consists of poetry but this part is mostly unknown to Western audience because it lacks the suspense narrators in Western folklore suppose to build. On the other hand poetic passages are almost mandatory decorative element in Arabic traditions of storytelling.

Painting of Scheherezade by Max Slevogt

Some of the most popular fairy tales from 1001 Nights don't belong to there...

7. Some of the tales in the collection of Arabian Nights are called 'orphans' because they don't have known ancestors in oriental folklore. 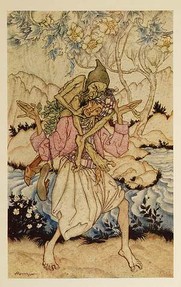 This list includes some of the most known titles as Aladdin and the Magic Lamp, Sinbad the Sailor (in illustration on the left presented by Arthur Rackham) and Ali Baba and 40 thieves. Most experts believe they were written by Antoine Galland, first translator of the 1001 Nights. Galland heavily edited the tales, erasing most of the poetry and scenes which he considered as inappropriate.

8. Most influential translator of Arabian Nights in English language was Sir Richard Burton. His approach was totally different than Galland's. He didn't only leave 'adult' scenes in the book, he even added footnotes to provide additional info on oriental intimate practices.

9. Stories from Arabian Nights influenced European literature much before Galland's translation. Many of the elements from the collection can be found in stories written by Bocaccio or Chaucer. Some of the stories came to Europe through Spain and some through Greece. When Galland's translation occurred, it coincided with the rise of popularity of fairy tales in French salons and the impact of 1001 Nights is clearly seen from then on. It is, for instance, Aladdin obviously inspired The Tinder-Box, first fairy tale written by Hans Christian Andersen.

10. Many collections of fables and fairy tales were created with adult audience in mind and 1001 Nights is no exception. When most of them started to aim at children in 19th century, Arabian Nights followed the crowd with several adaptations. But it seems adults never lost interest in exotic scenery of 1001 Arabian Nights and especially its complex characters with always intriguing problems of infidelity and revenge. 1001 Nights inspired numerous works in literature, music, theater, radio, movie and other media for children AND grown ups.

Do you think stories from 100 Nights are appropriate for kids?

You are, right, MBC. I actually believe most of them were made for grown-ups.

Many of the old folktales were not actually for children.

This would be great. I had pretty poor success with FaceBook, totally failed at Twitter, I just started to learn how to use G+, where things are going relatively well for now, but Pinterest is probably even better media for my stuff. You are right. We learn as we go!

Happy Valentine to you too:)

Great suggestion, tolovay! But with respect to blogging and social media, I'm in a "learn-as-you-go, go-with-the-flow" mode right now. But I suspect I'm going to get a handle on things one of these days and then write a simplified process for everybody to follow! (NOT! But it's a good goal to shoot for!) Happy Valentine's Day! <3 :)

Thanks, cmoneyspinner, this is very kind of you. Of course I approve. I rarely use Twitter. I see you are very active on social media and know how many of them should be used. Maybe you should write few Wizzles with tips on them? I know FB is very different than G+ and this is about it. On the other hand I know a lot about blogging scene which I prefer because it gave me better results in the past... Thanks again!

@Tolovaj - Starting something new today and hope it catches on. I decided that each Wednesday I will tweet articles by fellow Wizzlers and hashtag them #WizzleyWednesday. This particular Wizzle was baptized first. So if you're on Twitter put the hashtag in the search box and see what results. Hope you approve. Feel free to use this hashtag for your Wizzley tweets.

Some adaptions are kid-friendly, sure. But others are truly meant for adult readers. Even as a grown-up, I still enjoy reading Fairy Tales...especially the way they were originally written. Most tales have changed so much over the years that you almost wouldn't recognize them in their original form. Those are the stories I like to read...the raw early editions.

@WriterArtist They are popular among adults too:)
@sheilamarie Great to hear that!

Tolovaj, keep weaving your own tales here on Wizzley. I love your articles!

Rapunzel is a classic fairy tale which origins can be traced more than thousand years ago. Did Rapunzel really live?
96%  16   8 Tolovaj
Classics

Jakob and Wilhelm Grimm wrote most popular collection of fairy tales of all times. They also helped to set some of most important values for all humankind.
Loading ...
Error!