A Night in the Snow: the survival of the Reverend Donald Carr

In 1865 the devoted Church of England rector set out across the snow-clad Long Mynd to give a sunday service. His survival was a feat of endurance .

The Long Mynd is a low Shropshire moorland reaching sixteen hundred feet. It is a lovely place to walk in Spring, Summer and Autumn , as I know from personal experience. In Winter it can be exposed and dangerous. It is deceptive, as its height is not great, but it can take Atlantic snow blasts from Wales to the West and also from the East. Having once experienced it in snow conditions far less severe than the Reverend Donald suffered, I know the dangers that lurk on its lonely slopes.

Snow on the Mynd

The young farmer looked at me in surprise as I loomed upon him clad in cold weather gear and explained that I was crossing the snow-covered moor. The snow was coming from the West and had met me full on at Stiperstones, west of the Mynd, and I was bent on returning to my car, which was parked at Little Stretton. I knew my way, kept to the road, the snow was not deep and was certainly manageable, though, as a previous article on the Mynd has revealed, I was not spared some diffiiculty. So I was not awed by the walk; but the farmer probably knew the  grim tale of the Reverend Donald Carr,and what the moor nearly did to him.

Reverend Donald was a man who met the highest standards of the ministerial vocation. At a time when many ministers looked for comfortable and rich parishes, Donald chose a rural one; in an age when some ministers neglected their duties, he was assiduous in serving God through his people. So when he found that the then poor hamlet of Rattlinghope was short of a vicar, [ no money-seeking minister would touch it] Donald took it on as an extra duty beyond his own. This was despite the fact that his parish, Woolston,  was east of the Mynd [south of Little Stretton, see the map] while Rattlinghope is north-west. He did not neglect services, but insisted on crossing the Mynd to give a morning service at Rattlinghope and then  recrossing it to return to his own church for the evening one. Even in Winter!

On Sunday the 29th January 1865 he, with a servant and a horse, set off to give morning service at Rattlinghope, north east of Wentnor, determined to  be back home for evening service. Soon it became clear that the snow was not easy for the horse, so he sent it back with the servant and went ahead on foot. Eventually he hit the Portway, the ancient track  that crosses the moor and a well-used drove road. On  arriving at Rattlinghope he found that none were expecting a minister in that grim weather, but a hasty service was held and then he set off back for his evening work. It was an evening service he would not give.

The minister was confident that he knew his way round the moor, and so he set off back on foot, but the January days were short, the snow came down more thickly, and the wind was coming from the East, in Britain never a good direction. Aiming for the Portway, which would have taken him down to Church Stretton, he lost the road. Sensing that the ground was steepening towards the steep slopes of the Mynd he turned back, but by this time he had lost his bearings, and it was darkening. Then he fell.

He had stumbled into Long Batch,a dangerous ravine. The fall consisted of a six hundred foot slide to the bottom of one of the most difficult valleys on this ancient moor.  Fortunately the moor is not littered with stones, but heather-covered, so he was not ripped to shreds, and he landed softly, but his boots were ripped in the fall and he was left with stocking feet. Furthermore, his gloves were damaged. Exposed extremities in such conditions make for frostbite.

Somehow the vicar managed to climb the six hundred feet out and stumble onwards, only to tumble in the near white out conditions into another ravine, almost as bad as the  first. By then he was nearly disorientated and he realized that his eyes were not picking up light well, what light there was was obscured by a bout of snow blindness. He could not go on, so he snuggled up for the night, expecting to be found dead in the morning. At this moment he was concerned that for the sake of his family his body be found quickly. As he did this, the faithful Christian entrusted himself to God in prayer and waited, knowing that if he survived till the morning the direction of the sunrise would show him his way, if his eyes had recovered  by then. It was a long and grim night, during which he was so hungry that he even thought of eating his dog skin gloves, or what was left of them.

Somehow the minister survived the night.

In the morning he climbed out of the ravine, though by that time he had lost all feeling in his fingers and toes. He was by then entering the slopes of Carding Mill Valley, a weavers' setttlement now saved for the public by the National Trust. There  was yet another narrow escape, for  trudging through the snow he was approaching Light Spout Hollow,a waterfall, and if he had not seen it,  the fall down it would have  certainly killed him, but he heard the sound of water in time and changed course.

Stumbling through the snow he heard children's voices, so he approached,but then went into a drift upto his neck. Now he was stuck, so he called for help, but the children thought he was a bogeyman [a mythical  creature  used to scare children into behaving] so they ran away to tell their parents. The parents, however, realized that a man was trapped and set out on a rescue party to dig the Reverend out.

But the people were not rich enough to own transport, so some of them helped the by now barefoot man to walk to the Church Inn in Church Stretton, where the landlord lent him some dry clothes, which were much too large [as the landlord was substantially bigger than the minister] gave him some warm drink and sent for a pony and chaise to take the very relieved minister home to his family, who feared him to be dead. Fortunately, he was advised not to put his frozen fingers or toes into hot water, lest gangrene set in, but to let them thaw gently at their own pace. He followed this advice and made a full recovery. Later on he set down his experiences in a book,  A Night in the Snow, which is now out of print and quite rare. I read of his experience in The January Man.

The minister's survival involved inner strength of mind and body, but  also the help of others. Without a tough body he would not have lasted the night. Physically strong people have given up  and died, so mental strength was needed as well. As a Christian minister he drew on his prayer to mentally strengthen him. But others were needed. Without the good folk of Carding Mill Valley to rescue him he would have died. The rugged individual who lives without the help of others is a delusion, for we  are all vulnerable, no matter how physically strong we are.

Derdriu, the Long Mynd is in the west of England close to the border with Wales. In these areas west of the River Severn Welsh was spoken until the Eighteenth Century, as the population were basically Welsh people absorbed into England in the Saxon period. . So it is unsurprising that Welsh words such as Mynd survived in place names. For the locals the name means Long Mountain.

frankbeswick, Thank you for the photos, practicalities and product.
The story has a happy ending that I didn't expect with the statement "It was an evening service he would not give."
Wikipedia and Wiktionary offer different meanings for mynd: mountain versus image, imagination and picture as a noun and to go as a verb. What would I find as a meaning among locals?

Yes. The story caught my attention as I have personally walked the Long Mynd in snow. When something has happened in a place that you know the story becomes very meaningful. What struck me is that the Mynd is so small compared to the large mountain ranges of the world, but he was so near civilization, but so far from help.

Quite a story. I'm glad to hear he survived without losing his fingers or toes. 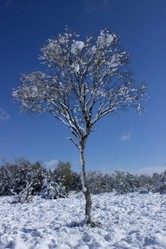