As a child, seeing the health of a Parent deteriorate right before your eyes can be one of the most difficult things to endure.

I went through this with my Mom. Since I was still single and my sisters were married and had families I was the one she depended on. Although my Mom was relatively healthy all her life, her health started to go downhill starting in 2001. She was 82 at the time and I knew her time on this Earth was going to end sooner or later.

She wound up in the hospital two times that year but I never really thought anything about it, I knew she would be coming out all well. From 2002-2004 she was in the hospital 9 times staying for an average of two weeks. My Mom was diagnosed with Pneumonia despite getting shots every year or she suffered with urinary tract infection.

I joked with her that the Hospital was her second home.  She spent about half of the year in and out of there.  By this time the realization had already set in to the point that my Mom and I discussed getting her a Living Will.

For those that do not know what that is, a Living Will is a legal document that will make a person's wishes known regarding prolonged medical treatments.   I discussed this after asking her if she wanted to be kept alive by machines, if she was not capable of making decisions on her own.  She expressed her wishes that she would not want to so we talked to a hospital social worker about the forms.

In November of 2005 she spent one month in the hospital basically for the same diagnosis.  At this time she was taking so much medication for different ailments.  Over the year she became weaker.  Pills like Prednisone, a steroid pill used to treat inflammatory disease, complications of chronic illnesses among other medical conditions, she was also taking pills for high blood pressure and other things.  I joked that she could open her own Pharmacy.

When she came home one month later she was so weak, to the point I had to help her to the bathroom, to bed.  One week later on December 11 I was helping her to the bathroom when she stopped walking and just stood there at the entrance.  I kept asking her what the trouble was, if she needed her cane to help her walk but I had no reply so I got her cane which was nearby and tried to put it in her right hand and that's when I saw why she did not say anything.

She was suffering a Stroke.  Her right hand was curled in so I knew immediately what that meant.  I saw my Dad do the exact same thing years before when he was in the hospital and he suffered a Stroke while I visited him.  I immediately ran for a chair to sit my Mom down and then I called 911 for an ambulance.

I waited in the ER waiting room until a Nurse told me I could see my Mom and when I got there she was lying down but alert and moving her arms and legs, like nothing happened.   I asked her how she felt and she replied she was okay. Although I did not realize it then, I did notice that when someone asked her a question her response was a little slower than usual.  Since I knew the drill, that she was going to be admitted to the hospital, I did not stay till that happened and I told her I would see her the next day.

In the morning the next day I received a call from her Physician and he told me my Mom suffered 4 mini strokes while in the ER and she now had a feeding tube inserted in her and she was unable to swallow.  When I got to the hospital my sisters were there and I saw my Mom.  The 4 mini strokes left her unable to speak.  She was able to recognize all of us which I Thanked God for cause years ago my Dad suffered 2 strokes and the last one wiped out his memory so I was very relieved when my Mom smiled at me and grasped my hand.

My sisters and I needed to make a decision.  There was no way none of us could give her the care she needed after being released so my older sister arranged for my Mom to enter a Nursing Home.  Hearing the horror stories about these places I was hesitant but I also knew I had no choice.   Three weeks later she was moved to a Home that luckily I lived nearby to so I could visit every day.  Since my Mom could not speak we communicated by squeezing each others hand but I could sense something was wrong.  When I talked to her she would always end up smiling even if it was a serious conversation.

During her time there she was given physical therapy cause the Stroke she suffered paralyzed the right side of her body.  I also talked to the Social Worker and I expressed my Mom's wishes for a Living Will and to my surprise the Social Worker was able to get it done despite needing my Mom's signature.  My sister was able to get Power Of Attorney so her wishes would be granted if and when the time comes.

In February of 2006 I had a huge glimmer of hope.  On the way to a Doctor's appointment, while waiting for the driver,  I saw my Mom move her right leg and arm, the same limbs that were paralyzed 2 months ago.  It was not much of free movement but I had hope.  With more therapy, I thought, maybe one day she could come home.  A few minutes later my hopes were severely dashed.

The X-rays that were taken during her time in the hospital after the stroke, the results were given to us and it confirmed a feeling I had while talking to my Mom the past two months.  I had a feeling she could not understand what I was saying to her.  The Doctor told me that my Mom's brain suffered a blockage and that she would never fully recover.  I totally broke down when I heard this.  A few minutes before I had this huge glimmer of hope and now.....I just broke down and cried.

I looked at my Mom and she was there smiling but her expression changed to sadness when she saw me.  I decided not to get a second opinion.  The months passed with no signs of improvement, physical and mental.  On June 27 I got a call from the Nursing Home saying she was admitted to the hospital cause she was non-responsive and lethargic.  I couldn't believe when I saw her.  Her whole left arm looked like a balloon, it was so swollen.  Two days later I visited her and her arm was still the same and although it looked like she had her eyes slightly open, she was not responding to the squeezing of her hand..

Although the Doctor kept telling us she will be okay I knew in my heart the time has come.  I told my oldest sister since she had Sunday off to visit Mom and I told her of my feelings.  Sunday July 2,  I decided to stop at the National Memorial Cemetery Of The Pacific where my Dad is buried and over his grave I told him, "Mama will be joining you very soon".

The next morning, July 3, I woke up at 9 am (09:00), turned my phone on and 3 messages were waiting for me.  I started crying cause I knew who it was and sure enough it was the hospital telling me "I am sorry to inform you that your Mom passed away early this morning".  The last call was from my sister who had Power of Attorney and she told me she was arranging for the funeral.

I found out later that week that her favorite Priest passed away 12 hours before she did so I always think that when her Priest passed away his Spirit went to my Mom's room and held her hand and waited till it was her time and both of them took the Eternal Journey together.  That really gives me comfort.

My Mom lived to be 87 years old.  The last 5 years of her life I saw my Mom's health deteriorate and although I am very sad she is no longer here I know I can take comfort she is now pain free and with her loved ones in Heaven and that as long as her children, grandchildren and great-grandchildren are alive, her memory will never die.

I read your story and now I finally realized what happened to mom. Your story the way you told it was like an author of a book haha, but yes now I know the whole story of what happend. Touching story. 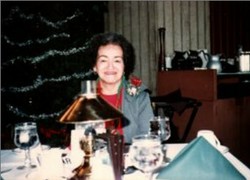 Eminent Domain was nothing new but neither was the old apple tree. It had survived drought conditions, blizzards, and an ice storm. It was not going to fall victim to a chain saw.
80%  34   6 Veronica
Family Stories 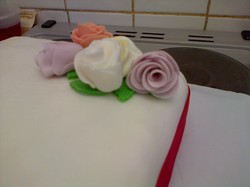 It was a great honour to be asked to make my son's wedding cake ; but was I equal to the task? Here I have charted my progress from normal mum/ mom cook to wedding cake maker.
Loading ...
Error!