A Visit to the Giant's Causeway

The Giant's Causeway is a world heritage site well worth visiting

For many years people pondered about the causeway and developed legends about its origination and its connection with the Scottish isle of Staffa across the Irish Sea. Geologists have come up with a detailed explanation of features, but the legends have entertainment value. The Causeway is a magnificent natural feature that draws tourists like a powerful magnet. It has a visitors' centre and has facilities for disabled visitors. It is overall a very enjoyable experience.

Photo courtesy of Carrie11073, of Pixabay

This was not my first visit to the Causeway, but the two visits were very different. Some years ago I scrambled over the slippery, spray-soaked black basalt columns, confident in my nimbleness, sure of foot on uneven ground. But this time, now a septuagenarian with mobility difficulties, I chose [needed] to  take the mobility taxi, which wends its slow course down the road that leads down to the rocky headland and strand. We had a friendly and competent guide, Mark, who delivered a talk on the geology and folklore of the causeway. The talk was professionally delivered, and  well-informed. A very satisfying experience. I have studied some geology, but he told me some things that I did not know. The passengers included a friendly  Northern Irish lady and her daughter, who acted as her mother's carer. They added to the good atmosphere of the trip.

We alighted in a carpark at a headland composed of a mass of hexagonal columns, all showing signs of the inevitable erosion. The natural colour of the basalt is black, and this is clear in those columns washed clean by the surging Atlantic waves that thunder on Ireland's north coastline, but higher up the headland and consequently drier, the  rocks have acquired a grey patina and at spots a covering of  light-green lichen. I was soon met by the other members of my party, my wife, son and four year old grandson. The grandson was thirsting for adventure, so my son took him on the easy scramble up the low headland, followed by my wife, Maureen. They disappeared from view for a while, only to reappear on the descent, which Maureen took more slowly than the adventurous four year old and his father took.

In the meantime I had realized that with my mobility problems I could not handle anything but a flat surface, so I picked a seat and took in the view. Not being able to scramble was frustrating ,but medical issues mean that I cannot climb even a ladder. So I simply took in the view. Behind me was the hump of rock that comprises a significant part of the causeway, but before me     was a wide expanse of rocky bay. The shore is not sandy, but is a commingling of sand, rock and seaweed, on all of which the summer sun beamed beneficently down. A ridge of dark rock cropped up in mid-bay, and if you use your eyes and minds it is easy to see how it extends into a cluster of dark islets further to the east. The ridge is diorite, an igneous rock harder than basalt, which has therefore resisted erosion more successfully than the basalt of the Causeway has done. Our guide had informed us that the bay was once a hive of industry, when the Northern Irish used to harvest the extensive kelp beds to sell to the nascent chemical industry. This arduous chore is now gone, but as there is a great future for seaweed harvesting, a sea vegetable trade is being reborn. The bay was once rich in Atlantic salmon, but no one now makes a living from this now scarce species.

My ruminations were interrupted by the need to re-board the mobility bus and return to the  top of the cliff. I said a   short farewell to this beautiful spot and left.

The ancient legend tells of how the Irish giant Finn McCool constructed the causeway as a bridge to get him to Scotland so that he could fight a Scottish giant Ben an Dona, but found himself outclassed by the much larger Scot, who chased Finn back to Ulster. Finn's wife thought of a trick to save Finn from the Scot. who was chasing him, so she got Finn to lie in the baby's cradle. When Ben an Dona burst into Finn's house she  asked him not to wake the baby, but when the pursuing Scot looked into the  cradle he thought that if Finn's child  was so big how big must Finn be, so he fled back to Scotland tearing up the Causeway behind him, leaving remnants only in Northern Ireland and on the Scottish isle of Staffa.

I think that the legend of giants is very ancient, and the inclusion of Finn McCool, a figure well-represented in Irish folklore, is also of some antiquity, but the story of Finn's wife's tricking the attacking giant is probably a much later addition to the tale.

The geological truth is that about sixty million years ago there was a surge of volcanic activity beneath where the causeway lies. It was not the stereotypical volcanic cinder cone that sprays out ash, but a fissure eruption that injected rising magma into and onto  the existing rock strata. Basalt is fine-grained,  as is the norm for extrusive igneous rocks,  which come out on the surface, and it filled a river valley.  The extent of the flow was huge, with lava streams spreading to create much of the Antrim Plateau and spreading all the way to Scotland, which is geographically near to Northern Ireland. As the lava cooled it contracted and crystallized into mainly hexagonal columns, [six-sided] but there are some five and seven-sided columns, and one nine-sided one, whose location is kept secret to prevent damage from collectors.

During the subsequent ages further layers of rock were laid down as sea levels changed. These newer rocks covered the Causeway. Some of these  rocks became exposed as land and sea levels changed. Then came the Ice Ages, when huge glaciers planed down the old surface of the British Isles, exposing the Causeway's columnar  basalt. This erosion of the covering did not occur on the Scottish Isle of Staffa, whose columnar basalt still has a limestone covering. But the result was to make the Causeway unique. While it is one of sixteen spots  in the world where columnar basalt is found, it is the only one where the basalt columns constitute a major surface feature. On Staffa the basalt is found in cliffs. It is this that makes the Causeway a world heritage site and  a major tourist attraction. It is a feast whose recipe is a lovely mix of myth, history and geology.

Access to the Causeway is easy, as the coast road that skirts the mighty Atlantic leads you to it on a well sign-posted route. There is a good car park with a well-maintained surface, and it is easy to move around in it. Entry is not free, so check on prices before you go. Maureen and I entered free as we are members of the National Trust. I had to book a seat on the small mobility bus, but it was comfortable and well-driven by a knowledgeable and friendly guide, who was also the driver. Staff at the site are friendly and helpful.

The Visitors' Centre, where you buy tickets, is a modern edifice ecologically designed with up-to-date ground-source heat pumps and rain water collection. It contains a shop where visitors can purchase souvenirs and gift items, along with a small range of books. There is a restaurant where we purchased a snack. I had a caramel cake and a cup of tea.

You can add to your day out by making the short journey from the Causeway to the Bushmills Whiskey Distillery not far away, which also has good parking facilities. We did this, and though the guided tour was unsuitable for one with mobility difficulties, I enjoyed some good whiskey in the bar and Maureen purchased my birthday present in the distillery shop. A good day for all!

Your knowledge of crystallography is better than mine. I can only report my experiences,which are now limited by disability.I would have loved to scramble over the rocks,but those days are gone.

Basalt is common throughout the world. And the fine grains indicate quick cooling, since the individual crystals would stop growing once solidification occurs. This would be consistent with surface cooling rather than cooling deep in the Earth.

I would think the large columns were made of small crystals that come together. One basis rule in crystal formation is 5 and 7 sides are impossible. A crystal must relicaate the structure, so all verticies on any face must fit with the next identical piece. So, the larger structure feature must be a clustering of small crystals, not individual crystals.

For example, a five-sided regular polygon has interior angles of 108 degrees, but 3 X 108 is 324 degrees. So, when fitted together there is a 36-degree gap. This gap cannot exist.

So, they are not large crystals, but do exist. Also, if they were large crystals they would all have the same number of sides. So, why are they shaped as they are? Interesting dilemma. Something has caused the columns to have their shapes.

Mainly chemical, but there was some use of seaweed as fertiliser

It's interesting, under your subheading The Visit, where you share that "the Northern Irish used to harvest the extensive kelp beds to sell to the nascent chemical industry. This arduous chore is now gone, but as there is a great future for seaweed harvesting, a sea vegetable trade is being reborn."

Was the kelp harvest solely prompted by early chemistry industry needs? Or was there a traditional use for them in Irish culture?

You are correct,it is a picture of the Causeway.

In particular, I'm intrigued -- in the second paragraph under your subheading, The Visit -- by the lichen covering some headland rocks. Trees sporting lichen here are indicators of environmental cleanliness. Are rock-attracted lichen indicators of atmospheric, soil or water cleanliness there?

The image left of your title is of somewhere on the Causeway, right?

Lighthouses of Ireland has the stories of ten of the Emerald Isle’s sentinels... 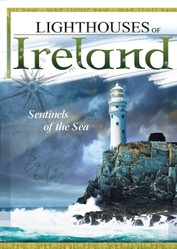 Lighthouses of Ireland has the stories of ten of the Emerald Isle’s sentinels of the sea before the replacement of keepers by computer automation by 1997.
100%  20   9 Veronica
Ireland

The beautiful city of Belfast is recovering from its troubled past. It is now developing its tourist industry, largely with help of the doomed ship "Titanic". I went recently.
Loading ...
Error!