Abraham Lincoln was born in Kentucky but moved to Illinois where he spent most of his adult life. Take a virtual tour of the Lincoln sites around Springfield, Illinois.

Abraham Lincoln was the sixteenth U.S. president. He left his mark in the Springfield, Illinois area. Some of the highlights include the following sites you can visit today:

Where Lincoln Lived as a Young Adult 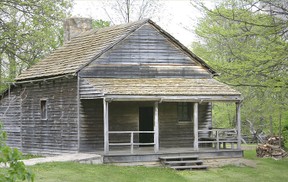 When Abraham Lincoln moved to Illinois in 1830 at age 21, he first settled in Decatur then moved New Salem, a new settlement about 20 miles northwest of Springfield.

Here he worked as a store clerk, a postmaster, and a surveyor, among other jobs. He began studying the law, and Lincoln became a lawyer in 1837.

New Salem now stands as a National Historic Site operated by the National Park Service. It is a reconstruction of the village where Abraham Lincoln spent his early adulthood.

New Salem is open year round from 9 a.m. to 5 p.m. and the fees are suggested donations. In the off season, the site is closed Mondays and Tuesdays.

Capital Moved from Vandalia to Springfield 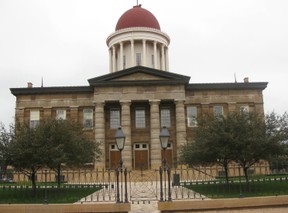 Originally, Vandalia was Illinois's state capital. In 1837, Abraham Lincoln helped to get the capital moved to Springfield.

The Greek Revival building shown here was the first state capitol building in Springfield. In it, Lincoln worked as a lawyer trying cases before the Illinois Supreme Court.

Lincoln also began his U.S. Senate campaign giving his House Divided speech in 1858 in this building's Representatives Hall. He lost that race to Stephen A. Douglas but two years later he was nominated for president.

After his death, Lincoln's body lay in Representatives Hall to allow 75,000 mourners to pay their last respects.

The Old State Capitol is now is open for tours Tuesday through Saturday.

With his partner, William H. Herndon, Lincoln operated out of the downtown Springfield office from 1843 to about 1852. While Lincoln served as a U.S. Congressman from 1847 to 1849  Herndon maintained the practice.

This photo shows statues of the Lincoln family in front of the Lincoln-Herdon Law Office on the Old State Capitol Plaza, downtown Springfield. 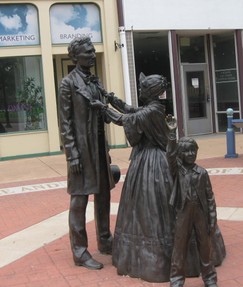 Tours are available Tuesday through Saturday.

The Lincoln Family Lived There 17 Years 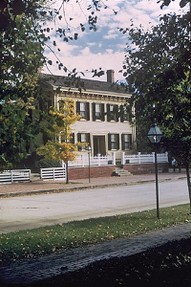 While Lincoln lived in Springfield, Illinois before leaving for Washington, DC, he and his family bought the only home he ever owned in 1844.

The Lincolns lived in the Greek Revival home in Springfield until he departed East to serve first in the U.S. Congress then later as the sixteenth president.

His son donated the family home to the National Park Service upon the condition that it would always be well maintained and open free to the public.

Build Your Own Version of Lincoln's Home

The Abraham Lincoln Presidential Library and Museum opened in Springfield, Illinois in 2005.

Scholars visit the library to study the life and works of Abraham Lincoln. It is the home of the new Illinois State Historical Library, which was previously housed in the Old State Capitol building. According to the Abraham Lincoln Library and Museum Web site, "an original copy of the Emancipation Proclamation, the 13th amendment outlawing slavery, the Gettysburg Address, and Lincoln’s presidential briefcase, all of which had been stored in a vault for more than 100 years" are rotated for display in the library. 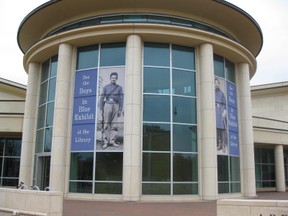 The Lincoln Presidential Museum is the largest presidential museum. It offers entertaining and educational exhibits about Lincoln's life from boyhood to his death. The museum contains two parts--the pre-presidential years and the White House years.

For a vast array of rare books and other Lincoln memorabilia, check out eBay's vast selection.

at Oak Ridge Cemetery in Springfield 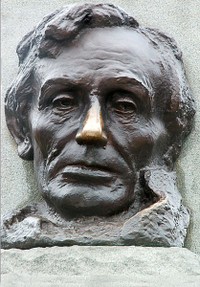 Growing up in Illinois, we visited Lincoln's Tomb on school trips. Everyone rubbed Lincoln's nose on a statue outside the tomb for good luck.

In addition to Lincoln, his wife Mary and sons Edward, William, and Thomas are buried in the tomb. Their son Robert is buried in Arlington National Cemetery.

The tomb is open to the public year round. On and near Lincoln's birthday on February 12 each year events are held at the tomb honoring Lincoln's life. In addition, from June through August, each Tuesday evening the 114th Illinois Infantry's Civil War re-enactors hold flag-lowering ceremonies at the site.

Recently researchers were able to discover the true color of the Abraham Lincoln Funeral Train car that carried his body from Washington DC to Illinois for burial.

National Park Service -- Become a Junior Ranger
Activity book full of information and activities for kids ages 4 to 12 to learn more about Lincoln.

Lincoln-Herndon Law Office
Find out how you can visit the only remaining law office where Lincoln practiced law.

Timeline of Lincoln's Life Through His Residence
A list of where Lincoln lived throughout his life.

Abraham Lincoln Home
Learn more about the Lincoln's only home they ever owned.

The Abraham Lincoln Presidential Library and Museum
Find out when you can visit the museum and library for your own up-close look at all things Lincoln.

Please give a thumbs up if you're a Lincoln fan. Have You Visited Any of These Lincoln Sites?

I've been to Lincoln's tomb, his house and the Lincoln museum. All three places are worth visiting, but you could spend a day in the museum. I wasn't able to visit the library.

I saw that book at a small library downtown, among very few titles in English. It must be selling really well if they carry it. :)

Oh, that would be interesting to visit! Also his home and the library. Thank you so much for this! And for finding that book the movie Lincoln was based on. It's a tempting one!

Mira, New Salem has reproductions of log cabins like Lincoln lived in there. He was born in Kentucky though, not Illinois.

You and me both, ohcaroline! I'm from Illinois, too, and we visited many of these sites (I always liked the home and tomb) on school field trips.

As a native Illinoian, we made an 8th grade trip to his log cabin home site. My ancestors all lived in the Springfield and surrounding areas. My grandmother is buried in the Oak Ridge Cemetery. He was always my hero. 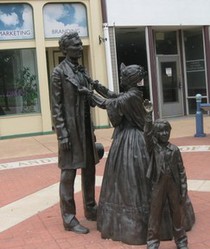