Britain is a land that produces great cheeses, and here is a small selection of them

Cheese making in Britain goes back into the depths of history, and there are ancient recipes for cheeses still being used. Many areas have their own cheeses, each with a distinct character. Often these are known by the names of the county from which they come.There is Cheshire cheese, a white and delicious,crumbly variety made from the milk of cows in the lush green fields of the county just to the south of where I live. But my native Lancashire has its own cheeses, which stand muster against any cheese from other counties. I believe that Britain's cheeses are an essential part of its cultural and culinary inheritance, and are a great contribution to the world of food.

Some time in the early Middle Ages a community of French monks moved northwards. Cistercians, a group who believed in silent,penitential lives, sought quiet,  wild places for their contemplation. Unlike the Benedictines,who were gardeners, the Cistercians were shepherds, at home in the wild hills of Northern England. There they settled, thinking that their monastery was established until Christ's second coming, and there they made cheese,first from ewes' milk, then from cows' with some ewes' milk added for texture. And they were content.

But there came a day in 1540 when the tyrant Henry the Eighth, aided by Protestant fanatics,closed the monastery, stripped it of its goods and drove the monks from their homes. But before they left the kindly monks gave the devoutly Catholic locals, who hated Henry's "reforms",  the method for making Wensleydale Cheese, which is still made today in their memory.

Move on a few hundred years and I received  a telephone call. My second son,Peter,an avid foodie who loves cooking and cheese,had been working as a Summer school English lecturer in a college near Wensleydale and had been able to take a trip with the students to the creamery at Hawes where the cheese is made. He wanted to share his experience with his cheese-loving father. His one regret was that he would have liked to have spoken to my father, also a cheese lover, and bring him a sample, but by then my father  was  no longer with us. But a good day nevertheless.

Wensleydale is now a cows' milk cheese drawn from cows that feed on the sweet grass of the limestone pastures of the Pennine Hills, which you see below. It is a white,crumbly cheese great for cheese on toast. It has a flavour that is said to make it go well with fruit, sweet fruits go well with it, and sometimes are included into the cheese itself.  This is a great cheese to serve at parties, especially if it is enriched by fruit

I detect an affinity of taste and texture with the gorgeous cheese Cheshire, but Cheshire, which is great for cheese on toast, one of my favourites, comes from milk from cows reared on the sandy, but well manured soils of the county whose northern border is one mile south of my home.

The Hills of Northern England

Stilton. For some reason this cheese is very popular with men, possibly because of its strong, savoury taste. Said to be the prince of English cheeses, this is one cheese that is a real delight. You would never cook Stilton, like you would some others, nor would you place it on bread, at least I would not. It would take its place on a cheeseboard and be eaten with biscuits/crackers. I also love Stilton on toast, for it seems to go with toast in a way that it does not go with untoasted bread. Stilton is a cheese to eat while drinking good English ale

The first reference to Stilton comes in 1730 when  Cooper Thornhill an innkeeper in the village of Stilton in Huntingdonshire,  made it to serve to his customers at his inn, but references to the famous cheeses of the village come as early as 1724, so the cheese making tradition must have been established well before 1724. Sadly Stilton is no longer made in the village, but is made in several villages and towns in the midland counties of Derbyshire, Leicestershire and Nottinghamshire.  The recipe,therefore, goes back a few hundred years

It comes in two forms, blue and white and there are strict standards set.The cheese must be of a cylindrical shape and be unpressed. It must have its own crust. Furthermore, the dark blue veins must be fine and radiate from the centre. They are made by the insertion of steel rods into the cheese, and the blue fungus grows where steel and cheese interact.  Blue Stilton must be forty eight per cent fat by weight,whereas white  Stilton, which is less common and has no blue veins, needs to be thirty two per cent fat and twenty three per cent protein by weight. The milk must come from local cows.

Cornish Yarg. Yarg is sometimes thought to be a type of cheese, but the word is none other than reversal of the surname Gray.Allan and Jenny Gray, cheese makers in Britain's most south-westerly county, Cornwall, discovered the recipe in a document dating back to the thirteenth century and decided  to revive it. When they retired they gave the recipe to Lynher Dairies of Pengreep Farm, where  Yarg is still produced.

It has ever been an artisan cheese, not mass produced, and the recipe has not been passed on to anyone else. Yarg must be made with the milk of Friesian cows, and it has a distinctly mild,milky flavour and a creamy texture. But its distinct character is that it is wrapped in nettles. You may not know that when a nettle is boiled it loses its sting. It is also worth knowing that the nettle is one of the most nutritious of plants, which draws its rich stock of minerals and hence its salty flavour from deep in the ground. So rich is it that it developed its sting to prevent itself from being gobbled up by every hungry animal that it meets. But the younger the nettles the better. There is also an alternative version which uses wild  garlic [Allium ursinum] which in Spring grows in great profusion in parts of Cornwall. The garlic and the nettles provide a savoury crust to the cheese.

Double Gloucester is made with the milk of the once nearly extinct old Gloucester breed of cows, now happily revived. The word double derives from the fact that it is always made with the combined milk from two milkings, never more. It is a full fat, semi-hard cheese with a buttery texture,  a slightly nutty flavour and has an anatto colour. The cheese is said to go well with  a traditional English ale, and so it is popular with people who like to eat cheese while drinking ale.Single Gloucester is rarer and is made with skimmed milk.

One unusual practice is that it is the cheese used in the annual Cooper's Hill cheese rolling, held in the Spring in which cheeses are rolled down a hill chased by the ones who rolled them, winner is first to the bottom. The killjoy authorities banned it in 2010, as so many people finished up with injuries, but it has returned, as the participants ignored the ban anyway, so the health and safety zealots gave up.

Red Leicester is a great cheese that can be eaten on bread, toast, biscuits or cooked. One of my favourite easy dinners is to cook a small amount of cheese in a frying pan and drop one or two eggs in, letting them cook together. Sometimes I drop in pieces of ham or chorizo and eat with the accompaniment of my home made bread.Red Leicester is a firm cheese that does not crumble and has a strong taste.

Lancashire is unique among cheeses as the adaptable and ingenious Lancashire folk discovered how to make a good cheese from the milk of more than two milkings. Creamy Lancashire has a fluffy texture and  when cooked it does not go stringy. It is great on toast.

Please note, all the names of the cheeses that I have given you are Protected Designation of Origin names and so can only be legally applied to cheeses from the designated area made in the designated way.

I have given you a small sample of the rich cheese tradition that we have in England. For Brevity I have not mentioned Wales, but it has its own lovely cheeses. Nor have I had space for Scotland  or Ireland. The rich soils of England are great for dairy farming and lovely tasting cheese made with skill is the consequence of this.

Crusty, unsliced bread, white or brown, sometimes French bread, maybe baguettes. go with cheese. I like my cheese on toast, and I Iove a goal's cheese and ham toasted sandwich. That is just my personal preference, but many people eat cheese sandwiches.

Previously, I intended to ask about bread and cheese and about toast and cheese.
What kind of bread (surely not this side of the pond-style sliced) is it that gets served? It sounds like you put cheese atop toast but not atop bread. Would that be a Frank Beswick-ism or would it be typical of your side of the pond?

One cheese that I really love is goat's milk cheese. While Britain is not great goat country [we keep sheep] goats are becoming more popular these days and some cheese makers are turning to it. The fat globules in goats'milk are smaller than the ones in cows' milk and this makes it the more digestible of the two. Goats' cheese is soft and crumbly, and I have never seen one that is not pure white.

Thanks for your comment, Veronica. I must admit that I have such a preference for blue Stilton that I often overlook the white version. If you added fruit to blue Stilton there would be a clash of flavours.I like cheese with chives, and I have also eaten it with nettles included. This was a firm, medium hard cheese.

Apricot most certainly is a modern addition, for the fruit is not native to Britain. Britain has a native species of cranberry, so it is possible that at times in the past it was added to Wensleydale cheese. However, being a bog plant, it is not found in the immediate Wensleydale region, where the rock is limestone, which creates a well drained terrain. However, if you study the Geology of the Pennines you discover that there are substantial areas of peat bog above the impervious millstone grit, where bog plants thrive.

I have eaten Wenselydale with apricot and cranberry, and I found that they go beautifully together.

frankbeswick, Are the apricot and cranberry versions of Wensleydale a modern spin or a traditional recipe?

I am glad that you liked it. There is such a rich variety in English [and other British] cheeses that I could only give you a taste of the many cheeses that my country offers.

Oh my! This page is so wonderful. I love cheese. Adding these food gifts to my wish list. Must share it so others will get some ideas. :)

Cheese making in Cheshire is likely to be of great antiquity as not only is it ideal cattle country, but is in northern England, which for many years before the Romans came had a pastoral economy like Ireland's, so it is believed. In such an economy cheese making is an essential part of life. 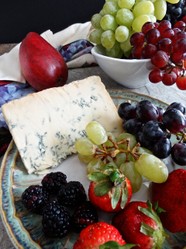