And Man Created God: review of the book

Selina O' Grady has produced a work that is historically well-informed, but it disappoints in its analysis of the key issue, the origins of Christianity.

The range of cults and beliefs across the world of the first century bce and the first century of the modern era was wide and variable, and the author has produced a work of great scope, that covers religious beliefs across the then known world, ranging from Rome and the Middle East, through Parthia, India and China. However, the book is basically a populariser and as such lacks original thought. Its originality is the breadth of its subject matter, but there is nothing new in its ideas, which at points need deeper analysis.

The book in general

Selina O'Grady is an experienced writer on religious matters and writes in a fluent and clear manner. The book is well-written and easy to understand, and it adopts a popular approach, which means that it embeds its message in quite a bit of historical padding that makes the writing interesting to the general reader, but is somewhat frustrating to people who like to come to the point quickly and deal with issues in conceptual depth. This is not to say that the historical material is irrelevant, as there is a mass of factual information  about the history of the time and about religious practices and beliefs.

The scope of the work is thorough. Beginning with the moves towards the deification of Augustus, she takes us through the range of cults, and she sets her analysis  in an account which demonstrates a broad level of historical knowledge. She is also good at analysing historical characters, and she can be quite incisive in her criticisms of people, such as the heavily over-rated Augustus Caesar.

However, there are inaccuracies and limitations in the book. She asserts at one point that scholars are aware of evidence for the apostle Thomas' activities in India, but she neglects to tell us what it is. She asserts that Pontius Pilate arrived in Judaea in 24 AD, whereas records say that it was 26. She speaks of  a legion being stationed at Castle Antonia in Jerusalem, whereas the place was too small for a legion and all the evidence suggests that it was an auxiliary cohort. Furthermore, she tells us that Stephen was executed for blasphemy against the law of Moses and the temple. If she reads Acts of the Apostles she would know that Stephen was executed for repeating Jesus' claims before Caiaphas and that he had said nothing about the law or the temple. Furthermore, she tells us that Paul went to Damascus several years after Stephen's death, whereas Acts tells us that it was shortly afterwards; and furthermore she provides a physical description of Paul as bandy legged. Where does she get any evidence for this? We do not have either a physical description or a skeleton. She also tells us that Paul was a member of the temple guard. Strange, the guards were from the tribe of  Levi, while Paul was a member of the tribe of Benjamin. Furthermore, she states the unevidenced assertion that Paul collected tax for the Romans. All this suggests that the book is defective in detail.

There are oddities in her account of Scripture. She tells us how Paul and Barnabas were expelled from the church of Antioch to go off among the Gentiles, but they were sent on a mission, and shortly afterwards she tells us that they are back at Antioch and were sent on a mission to negotiate in Jerusalem. Hardly an expulsion. At points the account has elements of imagination rather than sober history. She tells us that there were few Christians in Galilee, but she overlooks the fact that there are merely few records, and that several scholars are of the opinion that the early church had a Galilean phase ahead of Pentecost, a fact attested by the last chapters of John's and Matthew's gospels.

The underlying thinking of the book

To give any account of the origin and development of a religion you need to draw together several factors. There are the external life pressures on the people of a specific community, there are basic human existential needs, there is the internal logic of the beliefs of a religion, which develop take the religion in a specific direction, and there is also the power of the religious experiences that are the basic energy behind all religions.

Selena O'Grady focuses on external factors and existential needs, and she does this across a wide range of religions. But she is inadequate in dealing with the internal logic of beliefs, and she ignores the religious experiences that power the religion, which are not studied. While she mentions Paul's profound experience on the road to Damascus, she does not analyse it.  This is a fundamental defect and becomes significant in her handling of St Paul.

A study of this nature requires theological and philosophical analysis, and both of these are completely lacking, especially in relation to Christianity, which is the culmination of her book. Two chapters to cover the development of Christianity, neither  of which show any critical appraisal of conventional "liberal" scholarship,  is  not impressive as a study. Is she aware that history alone is not a  discipline adequate for the analysis of religious beliefs? The book at this point becomes seriously inadequate.She tell us that Paul deified Jesus and so invented Christianity as we know it. This is not a universally held view, but is only one strand of opinion and there are scholars with a different view, though she presents this view as uncontested fact. She fails to see that the word invented is not fact,but opinion. An alternative view is that Paul drew on his religious experience to draw out the status of Christ. It is noteworthy that he presented his gospel to the assembled apostles, according to Galatians, who saw no problem with it. But O'Grady overlooked this detail embarrassing for her views. She also completely ignores the role of Johannine thought in the development of Christian theology. She repeats the long discredited view that John's Gospel was written in the early second century, ignoring the probability that it only finished its evolution about the year 100, having developed from a witness source written earlier, probably beginning in the sixties and seventies.

As usual, Jo, you put things so well.

I know from experience that uncovering the origins of a religion can be tricky, but failing on historically verifiable facts is downright lazy. 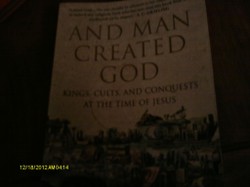 And Man Created God: A History of the World at the Time of Jesus
51%  8   4 frankbeswick
Exploring Religious Options

Many Muslims struggle to understand the Christian faith, but there are ways of explaining it that are sensitive and respectful.
45%  6   4 squizzard41
Exploring Religious Options