The pandemic has given rise to some fevered speculation about the end of the world, based on biblical prophecies.

Every age has its concerns about possible disaster. Some people ignore them, others accept that disaster might strike, but some take them very seriously.Well,we do not know when the end of the world is due, but I am writing these words late at night and will not be losing any sleep over the possibility. There are more imminent threats and if we hear Gabriel's trumpet in the night, we will have to respond accordingly.

Photo courtesy of sumanley, of Pixabay

Every so often I answer the door to the Jehovah's Witnesses, who are always polite and friendly , more so than members of some other groups, such as the evangelical who was quite annoyed when I told her that I was a Christian. She wanted a pagan to convert! On a couple of occasions the Witnesses have asked  me do I believe in the end of the world, and when I reply that I do they ask do I think it is coming soon. I reply, " I don't know. It might be five minutes, and it might be a million years, but as I am well over sixty, unless it happens in the next thirty years or so, I am not bothered." They get the implication that as you age death is far more pressing than the world's end is.

I follow up with a reference from Acts 1. When Jesus gathered the Apostles prior to his ascension,they asked whether he was going to restore the kingdom to Israel. Jesus' reply was that it was not for them to know the times and seasons that the Father has set by his own authority, but that they should be his witnesses throughout the world, beginning from Jerusalem. Jesus was damping down eschatological expectation [expectations of the imminence of the fulfilment of God's promise.] However, since the ascension Christians have lived in the expectation of the Parousia, the second coming of Christ, but often they have erred in trying to find ways to predict when it will happen.

My first encounter  with one who insisted that the world was coming to an end was in late 1967, when I met a young man who argued,or rather strongly asserted, that the world would end in May 1968. He had a pamphlet from a fringe religious group that stated that a comet would strike.  This supposed  fact had eluded astronomers, but when did that matter to true believers? He even showed me a diagram of the solar system marking where the Earth would be when the comet struck. In vain did I point out that the diagram was scientifically erroneous as it was inconsistent with known facts. All the planetary orbits in the diagram were circular, produced by someone who was blissfully unaware of Kepler's first law of planetary motion, "The orbit of a planet is an ellipse with the sun at one of its foci." The true believer merely asserted his case  more strongly.I gave up and waited for May 1968.

Recently I spoke to two people. One was an 82 year old man, sad and depressed at the pandemic. He told me that his sister in Ireland had been saying that biblical prophecies in the book of Revelations were coming true and that the world would soon end. I got something similar when I spoke to a man in his fifties. I tried to re-assure them both that we cannot interpret Revelations too literally and that we have had plagues before. They seemed relieved, but how convinced these anxious folks were I know not.

The Book of Revelations is known as the Apocalypse.Apocalyptic writing developed in the second century BC. It differs from prophecy in that prophets claimed to hear verbal messages from God, while Apocalypse claimed to be based on visions. The visions were often extremely powerful and were full of symbolism, a fact that makes interpretation fraught with difficulties. Much apocalyptic writing is found in the Intertestamental Literature, works written between the last books of the Old Testament and the New Testament. However,there are two examples in the New Testament:the Olivet discourse in Matthew 24-25, which is also found in Mark 13  and Luke 21, and the Book of Revelations, which may be a combination of different apocalypses, two,maybe three.

Apocalyptic writing has certain distinct characteristics. It envisages a world in which evil seems to be dominant.  The focus is God's dealings with his sacred community, which may either be Israel or the Christian church, and these dealings are set in the context of the end times, which are seen in very dramatic terms, a war between good and evil in which evil appears to be strong and dominant and working to damage the sacred community of  God,seemingly successfully. Yet Apocalypse envisages that God will intervene, breaking into the world suddenly, dramatically and decisively to defeat evil and establish his rule on Earth. In Revelations God sends down a new Jerusalem  more sacred than its destroyed predecessor and punishes evil doers,those who follow the beast, Satan himself.  It is easy to see that Apocalypses were produced at a time when good people had given up on any hope that the world would progress into a better place.

It is important to say that you cannot read Apocalypse without seeing that it is about the sacred community, the Church and its travails. It is about having confidence that the church will survive the horrors through which it was going.  If you just read it for clues about the end of the world then you read it wrongly.

You must also realize that the Book of Revelations was a work with some of the characteristics of prophecy.Now there is one major characteristic, prophecy speaks primarily to its own time, but its message can be read by later times Revelations was speaking to the persecuted church of the end of the first century, at a time when many believers thought that the world was coming to an end soon. Its writer probably did not envisage that there would be at least another two thousand years  of history yet to come, so all of his symbolism was focused on the time at which he was writing.So nothing about our own time can be read into it.Furthermore, the message is expressed in much symbolism, which needs expert scholarly knowledge to decipher, so ordinary people should be careful about interpreting it.

Many people are superstitious about the number 666, which they take as a sign of the Antichrist. But this is not pertinent to our time.It was used as a secret code to denote the emperor Nero, since it  was considered too risky to criticize him in open discourse. Since the bulk of Revelations was written in the time of the Emperor Domitian, who was just as odious as Nero was but saner, 666 may be evidence that some of Revelations dates back to the time of Nero's persecution, which is known as the great persecution. Domitian persecuted Christians like Nero did, and though the church saw him as an agent of Satan, he is now dead and gone . There are persecutions of Christians in our time, but there has never been a time when someone,somewhere is not persecuting Christians.

But what of the Four Horsemen of the Apocalypse, who bring travails to the Earth prior to the end? They are conquest or pestilence, war, famine and death. Are they not operating in our time? Well, death has operated in all times, so nothing can be inferred about the end from this.  War also is endemic among humans. There has never been a time when someone was not warring against someone else. There, however does not seem very much war at the moment, mainly in Syria and Yemen. Not that we need have any naive allusions. At the moment no one can afford a war, especially with the cost of Corona virus. There are famine problems in the world, but there have been some horrific famines in the past. But there have never been times when someone,somewhere did not go hungry.

This leads us to pestilence. We are currently plagued with a new virus. But it is not the biggest killer that we have known, for the Black Death [Bubonic Plague] killed a third of Europe's population and came in waves over centuries. Cholera killed thousands until the nineteenth century and Smallpox  was similarly menacing for a long time.When these plagues and others attacked society there were many people who took them as signs of the impending end of the world. But their predictions were false.

But the threats that we face are political, for unscrupulous leaders are already doing what dictators and tyrants always do, make states of emergency the excuse for strengthening their powers and victimising their opponents.Extremists may use the pandemic as an excuse to whip up mobs against minorities. Let us remember that most mediaeval anti-Jewish pogroms were initiated not by church or state  but by mobs incited by rabble rousers. In our time the far right could use the virus to stir up anti-immigrant rhetoric. Already Viktor Orban, prime minister of Hungary, noted for his anti-immigrant stance, has blamed the spread of the Corona virus in his country on foreigners and immigrants.

We do not need to fear the Great Beast of Revelations any more than we normally should do, for the powers of evil are ever working harm,but we need to be alert to the evil  doers among us who see troubles in society as opportunities for personal gain.

I am an Amazon Associate and I earn money from Amazon sales on this page.

Interesting views. First, when I took the course in Revelation we studied two distinct possible meanings, the end of the world and the destruction of the temple in Jerusalem in the late first century. Looking at the historical conditions during that period one would certainly not wish to have liked through it.
Second, one slight correction. The planets are in elliptical orbits, but if we project them many are so close to circles many would be mistaken if viewed on a chart. People stretch them out for emphasize the elliptical nature they have. 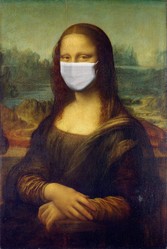 The long awaited decision to have women bishops is major progress.
100%  27   10 frankbeswick
Christianity