Chemical free fish and vegies, in your back yard. One of the best organic systems around.

Aquaponics as you might have guessed has many similarities with hydroponics. With Hydroponics nutrients are added to water in order to grow plants. These nutrients are generally man made elements mixed together to form a plant food.
Aquaponics uses fish waste to feed plants instead of adding nutrients. Fish are kept in a tank and water is pumped from the fish tank through grow beds full of plants and back into the fish tank.
It is a bit like a home aquarium. Instead of having a filter to clean out the waste, the water is filtered through the grow beds and the nutrients sucked up by the plants.

Let the Goodness in!

The big difference between Aquaponics and hydroponics is that hydroponics are kept rather sterile.  Contaminates are kept out and the nutrient levels have to be kept very precise.  Aquaponics on the other hand are like a mini ecosystem.  Bacteria are needed in an aquaponics system to break down the fish waste into useable nutrients the plants can use.  Often good bacteria are added to the system and even earth worms can be introduced to help break down the waste.  As it is a more natural system, chemicals and nutrients do not have to be monitored.  If the plants require more nutrients it can be as simple as adding a few more fish.

Grow your own fish

The fish can be just about any type of freshwater fish.  Many people use the common Gold Fish as it is a tough robust, cheap to buy fish.  Fish that produce more waste such as catfish can be used to get maximum nutrients. Other fish commonly farmed in an aquapoincs system include table fish such as  Silver Perch, Tilapia, barramundi, trout, Murray Cod and Jade Perch.  Other animals such as Yabbies, Crayfish and Mussels can also be grown.

A small aquaponics system can consist of a fish tank(does not have to be glass) a couple of grow beads and a sump (which is another tank to collect the water), a pump and of course the media or gravel to add to the grow beds.

You can set up a small system to continuously cycle the water or to flood the grow beds on a regular basis.  Flooding the beds is better as it gives the plants roots a chance to dry out and get air into the beds.  Worms and microorganisms need air to survive.  Often the beds are flooded on an hourly basis.  A valve on a timer is used to precisely control the flow of water.

With an aquaponics system, the main thing you need to monitor is the PH or the acidity of the water.  Plants have an optimal PH they prefer to grow in.  Too high or too low PH can kill a particular plant.  Many fish are quite tolerant of the PH range of plants.  There are some fussy fish that like a particular PH level, so doing your homework and matching plants with fish can be beneficial.

Aquaponicss is becoming more mainstream and we are starting to see a few large commercial farms.  It makes good sense as aquaponics gives many of the controls of hydroponics without the chemicals.  Larger operations are more interested in the production of fish for eating.  Aquaponics can produce fish in a more natural state as the filtering of the water through the grow beds produces a more natural ecosystem for the fish.

As aquaponics systems get larger the controlling of the water flow and flooding of the beds needs to be accurately controlled.  A system with a small water capacity can be used more efficiently by flooding the beds in cycles.

Its all about control

The use of microcontrollers with electronic valves is used to control the water flow.  These controllers can be purchased ready to go or made with basic parts using off the shelf components.  A popular microcontroller for aquaponics is the Arduino board.  With a bit of programming knowledge the Arduino can be set up and monitored on a PC.  It can even be set up wirelessly to easy control an aquaponics system.

If you are thinking of starting a garden, aquaponics can be a cost effective and interesting way of gardening.  It is a great teacher of how our ecosystems work and a great hands on teaching tool for kids.  If you are looking for something a bit different, give aquaponics a hard look.

Do it your way

There are no hard and fast rules when it comes to aquaponic system design.  You can use a traditional hydroponic tube style grow bed or any number of unusual designs.  You can make the grow beds into an ornate living wall or have a vertical down-pipe design.  The best thing is you can easily change your mind and do some experimenting.

If you live in an Apartment or townhouse space constraints can dictate what style of system you might be able to have.  a more compact barrel style system might suit.  Yes you can turn a barrel into a system that is really compact.  It is as simple as adding the grow bed to the top of the barrel and let the water drain down into the barrel below, which houses the fish.  A simple fish pump keeps the water recycling over the grow bed.

The problem that Australia has is that introduced species are generally a pest [cane toads, rabbits] so I can see why you left carp off the list. As I pointed out, you need to keep carp in fresh water for a week or two befiore the flesh becomes less "muddy" to taste, so I can see why you rarely eat them.

I left carp off the list, but it is used in aquaponics. Carp here in Australia is an introduced species and a real pest. I have seen European people get so excited about being able to catch carp so easily here. You can catch them in our dams by the truck load. I dont think many people here eat them.

Interesting point, John. I think that carp might be useful, as they are omnivorous, so spare food that cannot be sold could go to them. They are sometimes known as aquatic pigs.

In mediaeval Britiain the monasteries, which had to dine on fish on fast days, had carp farms. These consisted of a pair of ponds, one of which was kept empty and cows allowed to feed on the grass growing in it. This meant that the cows manured the ground. Then next year the other was drained and the dry one filled. The manure in the ground meant that the water plants grew well and thus insects were attracted, which fed the carp. The third pond was the stew pond, where carp, which can have a muddy taste, were kept for a week or two before being eaten to clean their taste. this is not pure aquaponics, but it takes grass and fish in sequence and integrates animals into the system.

Hi Frank, just saw that one in Manchester. Looks like an ambitious project. One of the biggest problems with food production is cost. Quite often farmers plow their crops back into the ground or dont pick their fruit because the rewards are not worth the expenditure. Point being it has to be cost effective to be a viable.
A lettuce here in Australia might be worth 50c, but in a starving country it is priceless...

There is a new project in Greater Manchester, England, where they have taken a building and used it for a fish farm, which feeds the greenhouse section with waste water and where they also grow mushrooms on the ground floor. They have had to refit the whole building. It is a great project.

Aquaponics is fascinating. I have a book on fishfarming, but I am out to get some works on aquaponics. My wife will smile tolerantly when she sees me get another new idea.

Fascinating! It does sound like a great idea to recycle the fish waste.

Yeah, all that goldfish waste is great for the garden. Aquaponics is like a replacement for your filter. sort of...

Never heard about aquaponics before but I'm glad I read your great post a learned a few things.

This is really quite cool. I've kept goldfish for years, without ever once thinking to use the water on my plants. You've given me some serious pause for thought here.

Thanks Frankbeswick,
It is a really good idea on any scale. 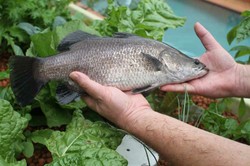