This historical market town in West Sussex has a cosmopolitan air and a comtempory culture which sits well with the heritage industry which plays a large part in the town's life.

Urban chic and country pursuits abound in Arundel, whether its horse-racing at the nearby Fontwell Park, or shopping in the antique markets and the art galleries. It’s not often you can strut battlements, climb spiral staircases to fairy-tale towers, relax in walled castle gardens then go fishing, boating or swimming before taking a walk on the nearby South Downs, the UK’s newest National Park. This is all possible in the town of Arundel. If all this sounds just a bit too energetic then a quiet snack and a drink in one of the waterside pubs overlooking the River Arum is a good alternative. 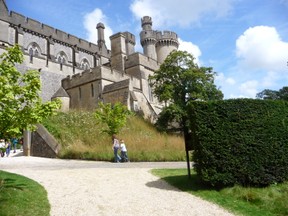 It is one of my favourite places, not least because of its castle and its cathedral, two of the first things you see as you enter the town as they dominate the skyline.  I return to Arundel regularly, not just for the sense of history it gives (it is mentioned in the Domesday Book) but for the magnificent gardens which are a delight to visit at any time of the year. 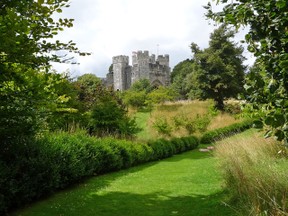 Built at the end of the 11th Century by Roger de Montgomery, Earl of Arundel, this great castle has been the family home of the Dukes of Norfolk and their ancestors for nearly 1000 years.

In its long history, the castle has had occasional reversions to the Crown, but mainly it has descended directly from 1138 to the present day, the family home of the Dukes of Norfolk and their ancestors for over 850 years, and still very much inhabited.

The third Duke of Norfolk (1473-1554) was the uncle of Anne Boleyn and Catherine Howard, both of whom became wives of Henry VIII.  In those politically dangerous times many of the Norfolk ancestors met an untimely death.  The 3rd Duke of Norfolk escaped the death penalty only because King Henry VIII died the night before the execution was due: the 4th Duke (1536-72) was accused of plotting to marry Mary Queen of Scots and was beheaded:  and St. Philip Howard, 13th Earl of Arundel (1557-95) died in the Tower of London for his faith.  (Although fiction, the wonderful Wolf Hall and Bring up the Bodies by Hilary Mantel, brings the Norfolk family to life as nothing else does.  Cannot recommend them too highly).

The castle as it stands now owes much to the 15th Duke of Norfolk (1847-1917) who completed the restoration in 1900, in the course of which it became one of the first English country houses to be fitted with electric light, service lifts and central heating.

So much of this history can be seen in the collection of fine furniture, clocks, tapestries and paintings that line the walls of the castle.  On display are portraits by Van Dyck, Gainsborough, Reynolds, Canaletto and others along with personal possessions of Mary, Queen of Scots.  The beautiful carved chimneypiece in the drawing room cost a mere £150 to make and install which tells us a lot about the money paid to fine craftsmen in those days.

Summer Events at the Castle

Once inside there are guides on hand to explain the history of the house: outside, the views from the top of the lofty keep make the climb worthwhile.

There are many ‘events’ at the castle during the year, most of them being geared to the younger generation, even toddlers.  The ‘siege’ events have an air of a carnival, medieval craftsmen in period costume wandering in and out among the food and drink stalls as the highly entertaining display of the armies battling each other with bows and arrows, swords and cannons on the crest of a hill take place. 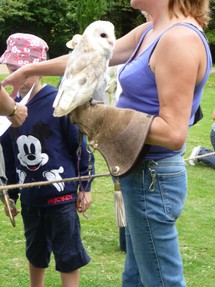 Falconry displays are among the most popular offerings for kids from nought to ninety.   Falcons, kestrels, and owls are usually on show, demonstrating their skills and being available to touch and stroke under the watchful eye of the owner.   They are a big draw for 'selfies' although a donation will be expected.

The Gardens - the Glory of Arundel

Outside, the gardens which are managed with an organic eco-friendly ethos to encourage wild flowers, insects and wildlife, are a major attraction.  They have been since 1854 when they first opened to the public.

There are many gardens in which to wander, from the internationally renowned Collector Earl’s Garden, The Stumpery, the hot and cool Herbaceous Borders with contrasting foliage plants, the Cut Flower Garden and the Organic Kitchen Garden, These supply the Castle with fresh fruit, vegetables and cut flowers.  The sheltered location of the gardens makes it possible for many perennials such as Cannas, Salvias, Bananas and Palms to remain in the ground throughout the winter.  Then there is the White Garden by the Fitzalan Chapel, planted with white Iceberg Roses, Cosmos, Cleomes, and Snow White Erymurus Lilies, and the Rose Garden, once a Medieval bowling green now planted with heavily-scented old-fashioned English roses that are at their very best in June and July. 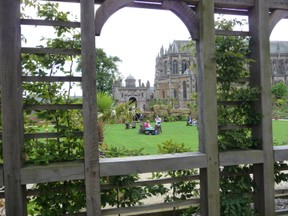 The Collector Earl’s Garden is a stunning place, with Italianate upper terraces filled with terracotta pots planted with magnificent displays of Tulips in spring and Agapanthus in summer which run along the water rills, whilst the lower terrace has a sub-tropical planting scheme with Palms, Bananas, Canna Lilies, Crown Imperials, and Tree Ferns.  During April & May, Arundel Castle is the place for tulip enthusiasts as over 15,000 tulips are in full bloom - one of the most impressive tulip displays in the country, among which are found Holland’s Glory, Lilac Time, Apeldoorn’s Elite, Black Parrot, Negrita, and the peony flowered Angelique. 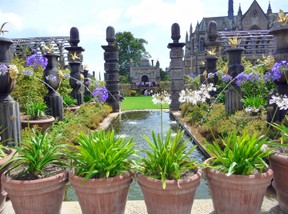 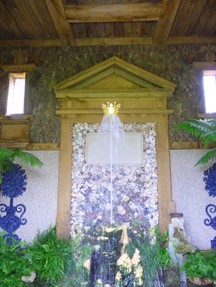 of a golden coronet ‘dancing’ on top of the jet of water from the stalagmite fountain inside the shell-lined interior. Over a meal in the restaurant or a snack in the cafeteria you may feel that you know the castle.  This may be because you have seen it many times on television as its exterior and interiors have been used for such films as Henry V – The Hollow Crown (BBC):  Henry VIII (Granada):  The Madness of King George, the much Awarded film The Prince and the Pauper (BBC):  Victoria & Albert (BBC):  The Antiques Roadshow (BBC):   Dr Who (BBC) and many others.

Viewing the castle will probably take a day, but try and make time to walk the streets of this lovely old town, or along the banks of the river.   It is a town worth spending time in but it is fortunate in having good transport links to all the other towns along the south coast, and London can be reached in just over an hour so that a return visit can always be scheduled.

Any time is a good time to visit Arundel as the gardeners are really good at their job of keeping scents and sight just right.

I'd love to visit in April or May, to see all those tulips! :) I enjoyed your description of the gardens in particular :-)

Yeah, it's quite Hitchcockian at times when they are all there!

Not so far as I recall, Mari. Of course, the visitor attraction side appears to have moved on a bit from when I was last there. I'm sure there were no falconry displays in the 80s. But then again, as my mother has a phobia of birds, we'd not have been to see them anyway.

I missed that. Do I have to be there at night to see/feel the presence?

Watch out for the ghost in the Library...

Thanks. I'm sure you would like it, and wherever you chose to stay in S.E. England or London, you are near enough to make a quick visit by train or bus. I'm not a great "stately homes" fan but I do love gardens and whatever time of the year I visit, the flowers and plants are amazing.

What a beautiful place. I would love to visit! 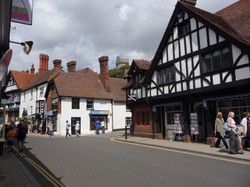