Back to the Slate Trail

Readers will recall that my son attempted to walk the eighty seven mile Snowdonia Slate Trail, but having dealt with the most challenging bits he suffered an accident that injured his knee and ankle and so was forced to abort the walk, limping down to the road where he had to flag down a bus that took him to a railway station. But not to be beaten, he returned in the last two days to cover the part of the trail that remained undone. This is his account.

All photos by Matthew Beswick

The roughest part of the Snowdonia Slate Trail is the moorlands near Blaenau Ffestiniog, an old slate mining town in the south of the Snowdonia National Park in North Wales. It was near there that he had his accident, a twisted ankle and swollen knee. He realized that around forty miles walking, even on good terrain was nigh impossible, but he was determined to finish the route eventually. So months later here he was in a guest house  in Blaenau [pronounced Bly Nigh] ready to set off on his route.

Twenty three miles to go along moorland footpaths, all before evening fell, so a hearty breakfast was in order,  as was a full water bottle, necessary because the day was hot even for summer. He avoided the road with its cars and trundling lorries and set off. Water proved more of a problem than he had anticipated and he soon needed a refill. But passing through a small village he chanced upon a couple who directed him to an elderly woman, a kind-hearted soul who willingly filled water bottles for walkers on route.

The moorland stretch was difficult, as much of it was open expanses of rough terrain, with heather and tussocks of matt grass, the large, hard clumps of grass whose name reveals their ancient use for weaving mats. What is more the surface  was uneven and at times stony, making walking less easy than one would have liked. But the ground was dry as a bone due to the hot summer. This was a two edged situation: on the one hand there was no mud,  something to be thankful for in a wet part of a wet island, but on the other hand, a dearth of running streams, many of which had diminished into trickles meant that refills en route were less available than normal. But the open moorlands are something of a challenge, for the solitary walker is alone with his/her thoughts, and in such distances an individual's weakness can  easily become oppressive.

But soon he began to spot the first signs of tree cover, as the land began to dip towards the wooded terrain  around the lovely village of Betws y Coed [pronounced Betus ugh coerd, oratory in the woods, in reference to a long vanished religious building.] The well-trodden footpaths nearer to the village made walking a bit easier, especially as it  was now a downhill stretch. He finished the route and deposited his bags at a bed and breakfast place in Betws y Coed before phoning his wife  and then me to say that he was safe. Then it was time for a large meal at one of the good eating places in the village, followed by a couple of beers and then an early night in anticipation of the second stage of the trek.

Betws y Coed is near to the confluence of the Afon Llugwy with the river Conwy [Conway] which takes its gentle course to the sea near the promontory of the Great Orme, a headland of Carboniferous limestone. The Afon Llugwy is very much the spirit of the village, as its spritely waters twinkle their joyful course along a path that includes some waterfalls, including the three-staged Swallow Falls. The falls are all small and the water does not crash down from a height, but tumbles over a proliferation of boulders. They are impressive, but not majestic.

The footpath is on the northern side of the river, while the road takes the southern bank. Matthew took the footpath, which leads through lush woodland composed of a mixture of fir trees and native deciduous woodland. It is blissfully easy to stay on your route. Just stay on the path and keep the river to your left. Anyway, the woods ascend the steeply sloping hillside, which at places approximates to a sloping cliff. So the gently rising footpath took him uphill towards the moorland terrain that characterises the rockier heart of the Snowdonia national park.

The walk was a gentle ascent along the river side, passing through the Gwydyr [Gwydir] forest which is a designated park on the lands of the old Gwydyr estate. Much of the older planting is a reminder of the days when the forest was a timber resource, so there are numerous softwoods, notably Norway and sitka spruce, larch and abundant pine. But recent years have seen the return of deciduous woodland, so Matthew found himself ambling through young specimens of Welsh oak, birch and beech. As a change from the arduous moorland paths along which he had trod the previous day it was a passage of sylvan delight made on a warm summer's day along paths that were safe underfoot  and not as lonely as the moorland ways of the first part of the route.

But at last the ascent stopped, the forest ended and the heathery landscape began again. The jagged heart of Snowdonia loomed.

A ruined cottage in the forest

A view from the walk

On exiting the forest he came to broader vistas, moorland used for sheep farming. Some of Wales' highest peaks would soon swim into view. The Carneddau Range was to Matthew's  right, a ridge of peaks which makes brilliant  walking. In fact, the stretch from Betws y Coed was on the edge of this chain of peaks. I walked the ridge in earlier years, so I know it well. Old memories are evoked.

The route was along a good footpath that did not gain or lose much height after the forest stretch, but gently undulated over a land of heather, bilberry and various hardy grasses. I would say that his aim was to reach the village of Capel Curig [Curig's Chapel] but all routes on that part of the way pass through there. It is a good place to stop for a snack and a rest, with two good hostelries to refresh tired walkers. But Matthew did not halt at Capel. It was a bit early to rest. The village is on a junction between the route to Nant Francon, a valley leading down to the sea and a road that leads to Mount Snowdon [Yr Wydfa] and the stark rock climbing grounds of Llanberis. At the junction he paused for a distant view of Snowdon, on that day happily mist-free. Then he moved on along the road that takes you between the rocky range of the Glydrs and the southern end of the Carneddau [pronounced carnedd aye]

Tryfan, [prononced Tryvan] part of the Glydr range hove into view [see the picture], making a much needed focal point for tired walkers to strive for. En route he passed the waters of Llyn Ogwen [Lake Ogwen], whose tumbling outflow careers down hill into the broad U shaped valley of Nant Francon. In that narrow spot two mountain ranges come close, Carneddau and Glydrs. It was here that he stopped for lunch, making the most of the Tea Shack, a little snack bar nestled at the edge of Cwm Idwal, renowned among climbers. You get a good burger there and a  drink.

The choice then is the road that runs down the east of the valley or the footpath that leads down the steep head of Nant Francon then runs on the western side. Both lead to Bethesda, the last step on the slate trail and the site of the now closed Penrhyn quarries. He chose the footpath and stepped onwards to journey's end, Bethesda. Nant means a spring and is a common place name in Wales, but Francon needs some explanation. It was in years gone by home to beasts known as afrancs, now extincted by hunting. Scholars are of the opinion that afranc was a local name for a beaver, so there is nothing mysterious about the afrancs. It was a pleasant way of finishing a long journey.

With Bethesda reached, the journey was safely over and he caught a bus to Bangor and the train home to his young wife. This journey was completed, Loch Ness is coming next. But more of that when it has been done!  Watch this space.

Larch and spruce were softwood plantings of non-indigenous trees. Native trees in the region are oak, beech, birch and small-leaved lime.

frankbeswick, Congratulations to your son and thank you for product lines, pretty pictures and practical information.

In particular, I appreciate the descriptive mention of area flora. But what endemic and native woody plants are there?

Would the larch and the spruces that you indicate be beloved or invasive introductions?

Two days ago he and I were talking about the route and he told me that the stretch from Llyn Ogwen to the head of the Nant Ffrancon valley was hard going,as the path goes along steep slopes and is quite wet underfoot.

I love walking and it has given me many happy memories, .

I admire people who trek and are fit to do so. The trail especially looks alluring for young and old. The terrain looks difficult in some places but the joy of enduring it and finishing the trail is immense.

Yes, I love the area. The photos that he brings back are a delight,as they remind me of my hill walking days. I am now too unwell to climb a mountain,so the pictures replace what I can no longer do

It appears to have nature at its beauty to behold during such a walk. 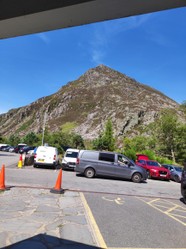