Backermann's Bakery in Whiteville, TN is a Mennonite deli and grocery store where you can eat lunch as you stock up on homemade breads and desserts, fresh milk, and organic beef.

The Yoder's run this Mennonite establishment with friendly charm. Mrs. Yoder told me that when her husband's family took over the bakery, they kept the original name of Backermann.

The spelling is something of a mystery with some of the signs spelled with one n and others with two (Backerman and Backermann).

My mother, daughter, and I took a trip to Backermann's just to spend time together, grab lunch, and buy some whole foods. We had a wonderful time browsing the shelves and devouring our delicious sandwiches.

Getting Sandwiches at the Deli Counter

Walk up to the deli counter and place your sandwich order. For convenience sake, the Yoders have printed up some small checklists where you indicate your choice of your bread, cheese, meat, and toppings.

Sandwiches are $4 and allow for a wide selections of breads, meats, and cheeses.

The breads are all homemade in the bakery.

Get the relish! It's wonderful. And be sure to ask for pickles. They are served on the side. If you don't like them, share them with someone who does. 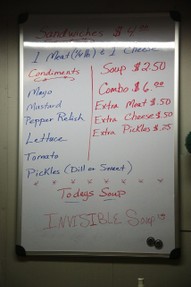 Add a bowl of soup for a $6 combo. The day we visited, the soup was mysteriously called "Invisible Soup." When we asked about it, we were told that there was no soup that day because of some work being done to the restaurant. The Yoders have a great sense of humor!

Hopefully when you go to Backermann's, there will be some soups to try. I certainly plan to sample some on my next visit.

Instead of the soup, we were able to find some crunchy snacks to go along with our sandwiches -- sesame sticks and veggie chips.

Some signs had an interesting spelling -- sandwhiches. I found it charming, probably a kickback to the European roots of the Mennonite community that founded Backermann's Bakery.

There is a spacious area to sit and enjoy your lunch. Napkins are simple -- paper towels on a roll. Cold drinks are available too and include some interesting flavors like birch bark "beer" and sarsparila "beer." If you are going to eat at a Mennonite deli, you really should try an authentic Pennsylvania Dutch drink.

Of course, the deli meats and cheeses can be ordered by the pound. I ate the most heavenly liver cheese and bought a pound to take home.

Have You Ever Eaten at a Mennonite Deli or Restaurant?

After we enjoyed our lunch, we leisurely browsed the store, choosing food items we wanted to take home with us.

Backermann's does have shopping carts, but we just took all our loot back to our luncheon table and collected it there until our checkout.

Backermann's accepts credit cards, debit cards, and cash. They do have plastic bags to bag your purchases, but we brought insulated bags to protect our fresh milk against the 100+ degree weather of that June day.

We found the employees of Backermann's very friendly and eager to answer questions about products.

Some items are local and others are shipped in from other areas, namely Ohio and Pensylvannia. Read the labels carefully as there are varying types of foods, some being totally organic and others including such ingredients as MSG and artificial sweeteners. Generally, however, the foods are whole foods that are pure and healthy.

Food Items for Sale at Backermann's

How Important is the Label "Organic" to You?

Not very important. I think the organic label is probably overrated.

if I can find organic at a good price, I'll consider it, but I don't usually buy organic.

I think it is a bit of a scam in certain situations. Sometimes you can find true organic and that is great. But some say they are organic but they came from an industrialized area. huh? Oh well, I try for as fresh as I can get, but I'll eat anything if it looks good.

Very important. I buy organic whenever available or affordable.

Eating organic is important to me. But I'll happily buy from a farmer who says its chemical-free even if not certified organic. And the organic label is just one factor - I'm not interested in processed and overpackaged food that is labelled organic.

I think it's of the utmost importance. I don't have any local place to get much now.

I try to buy organic when it's available, but I can see how large families could not afford it.

I prefer organic, though sometimes cannot afford it. I believe what we eat is important, though, and so try to choose wisely.

Organic milk and certain fruits and vegetables are a must for our family.

Besides the deli and grocery story, Backermann's also sells beautiful wooden products. We fell in love with the two chair and table combination. The chairs rock back and forth and swivel a full 360 degrees! (The chair set is one piece and costs $300.)

There were gazebos, swings, playsets, dog houses, and even a chicken house.

Mennonites are Christians whose sect is named after leader Menno Simons. This faith emerged during the Protestant Reformation. One of their main distinctions during that time was that they were Anabaptists -- or re-baptizers. They believed that a person who chose to follow Jesus should be baptized as a sign of that commitment (versus infant baptism).

For more about Mennonites, visit these FAQ at Third Way Cafe.

The Bakery Exterior on Highway 64

Carl, I'm just a fan of Backermann's. I am not the owner.

Oh what a wonderful life it is to have the privilege to shop eat here this is as good has it gets!

Delicious foods! We take our grandsons, ages 10 and 13 years, there as a treat. They love the bakery items. We live in Germantown, TN and the 45 minute drive is worth every bite. We try to go about once a month now because we are addicted to the fresh breads, cookies and other items. The fried pies are delicious and there is a large variety of them. No preservatives are used in the fresh baked items. If you live within 2 hours of the Bakkerman's...GO!!!! You will be happy that you did.

Backermans is between my home is Oakland tn and the family farm where my husband hunts in Silerton tn.. For months my husband bragged about the delicious sandwiches he would get for lunch. When he started bringing me yummy candies home, I was hooked! I've now been several times and just love it! I'm including some of their jams and fresh honey in my Christmas gifts for family this year! :)

I have been dealing with Backkermann's for a long time and find the food is always fresh and made from scratch. I usually go about once a month to enjoy their deli sandwich and soup. Also have purchased some of the outdoor furniture and it is so well made.

You didn't mention their fried pies! Whenever we go, we take a cooler and load up on bread, cheese, meat, their miraculously non-greasy corn chips, syrup, and FRIED PIES. The cherry ones are my favorite. I love Backermann's. I wish I could get there more often.

You are making me hungry..great article loaded with great marketing.

Terrific example of marketing a local business - authentic and fresh.

Jimmie, I have highlighted this Wizzley on Backermann's Bakery as an exemplar for marketing small businesses on the site:
http://smallbusinessodyssey.com/2011/...

Fried green tomatoes are a Southern treat, and so are fried red tomatoes, and...

The History of Southern Pecan Pie

Learn the history behind this quintessential Southern dish and how to make on... 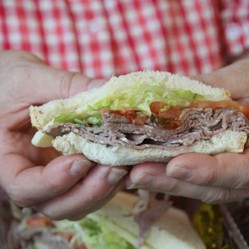 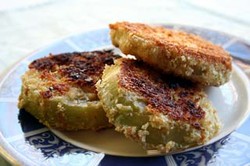 Fried green tomatoes are a Southern treat, and so are fried red tomatoes, and they are really good as a side dish for lunch and dinner.
84%  14   6 AbbyFitz
American Regional Food 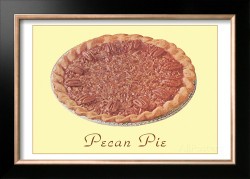 The History of Southern Pecan Pie

Learn the history behind this quintessential Southern dish and how to make one for yourself using either a traditional recipe or a gluten-free, sugar-free alternative recipe.
Loading ...
Error!