This excellent book, the first of two volumes, charts the life of Joseph Ratzinger [Pope Benedict the Sixteenth] from birth to the Vatican Council.

Giving an account of one of the foremost religious thinkers of the last hundred years is a difficult task which the author achieves with aplomb. Every thinker is the product of the interaction of their character with their studies and social and political influences, positive and negative. The book successfully manages to give an account of this. Furthermore, accounts of a thinker are often twisted by polemic and hostile comment, and Peter Seewald's work is an invaluable counter to anti-Ratzinger commentary. The book is well worth reading.

Photo courtesy of LoggaWiggler, of Pixabay

Many people might ask how a four hundred and thirty page work on religion can fail to be boring, to which I reply "Read it and see!" I found the book clearly written in a style easy to read. Originally written in German, the translation into English is masterful. Many large volumes have a sprinkling of editorial errors. I found three, of which one  was  a  mistake in a Latin book title.  I found the subject matter compelling reading.

The first part of the book is a  sensitive study of what life was like for members of an anti-Nazi Catholic family under Nazi tyranny. Joseph's father was an anti-fascist police officer who had in the period before Hitler came to power broken up Nazi street gangs. Then on Hitler's accession to power he found himself in a vulnerable position and was forced to move towns. There followed a series of posts until he took the opportunity of retiring to a small house with a large garden where he grew vegetables and hoped to see Hitler's fall. The moral and religious atmosphere created by Joseph was an essential part of his son's spiritual development. Also  significant was the role of Maria, Frau Ratzinger, whom Pope Benedict credits with instilling religious emotions in him to complement his father's more rational approach.

There follows an account of what life was like as a young person under a regime which thrived on corrupting youth. Being enrolled  without his consent in the Hitler youth was not to young Ratzinger's satisfaction, but he did not attend meetings and because of his lack of physicality and incompetence at sport he was not missed. It seems that in this respect he was spared.

We read of a religious young man who was set on becoming a priest. One incident stands out. After being conscripted to a work unit he and his comrades were visited by a  senior Nazi who informed them that they had all volunteered for the SS. The future pope refused to join what he would later call "that criminal organisation" and was subjected to a tirade of verbal abuse as a consequence.

We later read of his brief, reluctant military service and short stay in  a prisoner of war camp before release in 1946, whereupon he eagerly resumed his studies for the Catholic priesthood. We get a picture of a scholarly young man who through what seems to be an extremely high IQ and a great capacity for hard work progressed without difficulty through his priestly studies. This was an interesting and significant account of a vital stage in the future pope's life.

The rest of the book deals with Pope Benedict's life as a priest, but finishes after his vital role at the second Vatican Council.  Of great worth is the account of the formative influences on the future pope, and the account is a valuable resource for the elements in German life and culture that had nothing to do with the odious tyrant who stole power in Germany. Too often accounts of Germany give the impression that it was solely about Nazism. While the Nazis have to be accounted for there were richly cultured people in pre-war Germany, and there was a great intellectual and literary heritage in the country, which the young Ratzinger soaked up as a counter to the poisonous influence of Hitler.

We read of Pope Benedict's ordination as a priest, during which he heard the voice of Christ addressing him and calling him friend, surely a profound moment.

The book deals with Benedict's years as young curate in a village with all sorts of social problems, an experience that gives the lie to accusations that he was an "ivory tower academic. Yet the book is  adamant in its assertion of Benedict's high academic skills, and even those of us who valued his intelligence can be surprised at just how high his intelligence is. Readers also can get a feel for his capacity for hard work. That he managed to do the academic work of a theology professor while keeping up a rich prayer life in which he spent several hours a day at prayer is a testimony not only his capacity for work, but also the capacity of prayer to empower those who perform it.

Much of the book is taken up with an account of the Vatican Council and the battle between the Conservatives, whose machinations attempted to frustrate the necessary reforms in the church and the future pope's key role as an advisor to the forces of reform. This book provides significant insights into the processes by which church councils are run, It is no whitewash, for it deals with the interactions of flawed human characters as they scheme to get their way in the world's largest religious organisation.  Challenging questions about the religious authority of church councils are bound to arise, and we are left with the question of whether the church survives as a vehicle of truth despite some of its officials rather than because of them. But in this account of the process by which religious truth is ascertained Joseph Ratzinger stands out as a pillar of wisdom and rectitude. We are left with the feeling that the Holy Spirit picked the right person at the conclave that elected him.

The book is valuable in its debunking anti-Ratzinger myths that seem to have arisen from the theologian, the late Hans Kung. Kung claimed that Ratzinger had left a post at Tubingen University because he had problems with radical students. The book states that this is untrue and that Ratzinger always enjoyed good relationships with students wherever he taught. Seewald also debunks Kung's claim that both he and Benedict had interviews with Pope Paul VI. While not denying that Kung was thus interviewed, he recounts Benedict's statement that no such interview happened in his own case. In this book Kung comes across as somewhat unreliable and bent on self-publicity, as opposed to the shy and humble Benedict. It is good to note that the two men were reconciled prior to Kung's death.

Kung has done little good for Benedict's reputation, and certainly did no good for Benedict's reputation as "the Panzer-cardinal", gained when he was in charge of the Holy Office, the department responsible for doctrine. The image of Benedict as a ruthless, conservative inquisitor bent on suppressing nice, liberal theologians was concocted at this time. Seewald states with success that this was a false image and that Benedict was neither liberal nor conservative, but was a churchman who saw the need for change, but did not change for change's sake. Nor was he one who was blown hither and thither by the changing winds of the times or intellectual fads and fashions. This is a mark of a great mind.

Benedict's clash with some liberal theologians, Seewald thinks, was to preserve the legacy of the Second Vatican Council, which he believed was  being misappropriated by liberal theologians. As one responsible for steering the council through its difficult passage he was committed. In this claim I believe that Seewald is completely correct. Great minds like Benedict's  can never be pigeon-holed into simplistic, stereotypical. It is a sad fact that liberals claim to oppose stereotyping, but are hugely guilty of themselves stereotyping their opponents.

This is a good book well-worth reading. I commend it to readers.

I am an Amazon associate and earn money from qualifying links on this page.

It is out already. I have a copy, which I will begin reading tomorrow. I took a break between volumes to read a biography of St Paul, which I bought with a book token given to me for Christmas.

Happy New Year to you.

Frank, Belated wishes to you and your family and to Veronica and hers for a Merry Christmas and a Happy New Year 2022!

Do we know when the second volume will come out?

The book does not deal with the latter part of his life, so it does not mention his resignation. It mentions his frail physique, which was contributory to the decision to abdicate.. .

I have not read the Pearce biography.

The errant title is Itinerarium Mensis Ad Deum [journey of the mind to God] which should have ad replaced by in [into.] Another typo is when the word it is repeated at the end of a sentence. I have forgotten the other one.

Benedict can still serve as a priest or bishop.

frankbeswick, Thank you for product lines, pretty pictures and practical informations.
I'm familiar with the Pearce biography. Which do you prefer, between his and the Seewald book?

It's quite commendable indeed that only three errors exist in such a tome. What is the errant title, and what were the other two mistakes?

Would it have been possible for Pope Benedict to have returned to some previous responsibility, such as priest, within the Church?

From what I have heard of him, he is a solid theologian and committed to accurate theology. In today's society where too many people try to change the Church to suit their own needs he would not be popular, for the change must be in those who are Catholic in name only, not the Church, and he would always hold to the true theology.
Does the book indicate why he resigned as Pope? 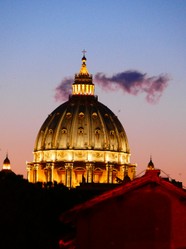 The monastic music of the Catholic church is designed to soothe the emotions and is a great help in dealing with stress.
93%  11   8 JoHarrington
Catholicism