Bergen - Gateway to the Norwegian Fjords

Gateway to the Norwegian Fjords, Bergen, city of colourful wooden houses, is spectacularly located, skirted by seven mountains and with boats in the harbour for work and play.

The city of Bergen grew up around its colourful harbour which in the 14th century became a Hanseatic Port when the Hansas, the German medieval guild of merchants, decided to open an office on the Bryggen wharf which, at that time, was the hub of commerce, seafaring and craftsmanship. This old Hanseatic Port of colourful wooden houses with ancient gables is one of Norway’s most familiar images, and is architecturally unique.

The tidy, pastel-coloured facias of the houses lined up like child’s building bricks sing out in the sunshine.  Fresh on the breeze comes the smell of the sea and the stronger smell of the seas’s inhabitants.  Turn the corner and there it is, the famous Fish Market of Bergen occupying a prime location in the heart of the city between the fjords and Bergen's seven mountains.

Rows of stalls straggle down the middle of the street, heaped high with salmon, smoked and unsmoked, cod, mussels, king crabs, crevettes and fish whose names are unknown to me -  proof of the riches garnered from the Norwegian sea.   Pop-up kitchens are cooking the fish, slapping it on plates and delivering it to tables set up around the stalls.  At one pop-up a Spanish family tends to a giant dish of aromatic paella, shellfish, mussels and clams peeking out of the saffroned rice that bubbles on the heat.  Hunks of bread are hacked from long loaves.  The fruits of the seas that surge into Norway’s fjords are piled high on trestles and tables as houswives sort them over.

I’ve visited many fish markets but Bergen beats them all. 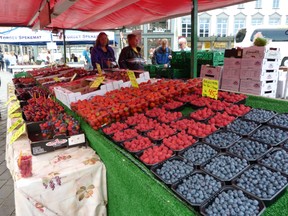 Not far away are the fruit stalls:  strawberries and plums piled high, the more delicate fruits like raspberries, cloudberries and blueberries boxed in transparent plastic cartons with an attractive display of assorted berries in see-through cone-shaped containers on sale. 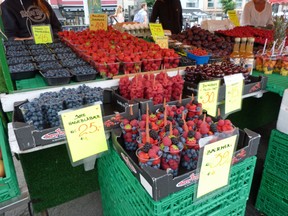 I buy one for £3 ($4) and walk along eating it with the miniature fork provided and as I meander among the stalls it dawns on me why the Norwegian young people I see are so slim, bright-eyed and healthy looking.  They are all eating the luscious fruit with evident enjoyment and nowhere can I see anyone feeding on a burger, a bag of crisps or French fries.

The city of Bergen grew up around its colourful harbour which in the 14th century became a Hanseatic  Port when the Hansas, the German medieval guild of merchants, decided to open an office on the Bryggen wharf which at that time was the hub of commerce, seafa

ring and craftsmanship.   This old Hanseatic Port of the colourful wooden houses with ancient gables is one of Norway's most familiar images, and is architecturally unique. 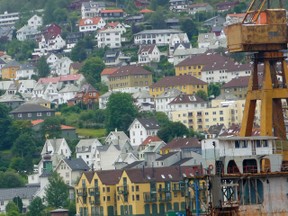 Bryggen has been devastated by fire many times but the Great Fire of 1702 reduced the city to ashes.  It was quickly re-built on top of foundations that had existed since the 11th century and today it stands as a symbol of Norway’s cultural heritage with the town of Bergen a World Heritage City.  Although sixty-one of Bryggen's buildings are preserved and protected this is not a dead museum like town as you will see if you meander through the narrow alleyways overhung by balconies.  The colourful wooden buildings now shelter a living community of artists' studios, craft workshops, shops, offices and restaurants.

As the Bergensers are keen to protect their traditions and building-styles the architecture is very distinctive and yet it has an enlivening diversity.  Visitors are always surprised to learn that although Bergen has suffered many fires over the centuries, it still has one of Europe’s largest number of wooden houses.  Even the mountainsides have clusters of small wooden houses scrambling up their sides.

Attractions away from the city of Bergen

If you get tired of streets and houses, you are just a short distance away from unspoiled scenery. Eight minutes from the city centre and you can be on top of one of Bergen’s mountains. Admire the view and enjoy the peace and quiet, high above the city. Few places have such a combination: a city with nature right on its doorstep. 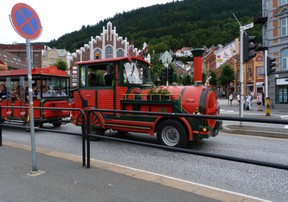 But it is the fjords that are the Number 1 attraction in Bergen which stands at the entrance to the whole kingdom of fjords: a sail through or along Norway’s long coastline should be on everyone’s list of ‘things to do before I die’.   Gaze on waterfalls tumbling down mountainsides into glittery silver waters, see tiny villages strung along the fjordline and fishing communities clinging to rocky outcrops, and white patches of snow on mountain tops even in summer.  In spring the fallen blossom from the fruit trees makes a carpet of colour over the fields below.

Why Norwegians are Happy

Recent reports have placed Norwegians near the top of the list of the happiest people in the world.  A few days in Bergen helps you understand why this is so, as you look around at the smiling faces watching the little boats – and large yachts and liners - sail into the pretty harbour.  They sit at tables with a coffee or a beer – even in late autumn – enjoying the last of the sunshine and knowing they live in one of the lovliest places on earth.

You are right about Bergen, it is a lovely place. Those cruise ships that come in are HUGE.

You have been to some wonderful places there. I loved the houses were coloured as you so charmingly show above.

My trip to Europe is in my wish list, this makes me plan for a vacation soon. Norway is beautiful and the loveliness is visible in the photos.

I drink little coffee, sadly, for health reasons. I think, though, that Norway's non-alcoholic beer is the best that I have tasted.

It wasn't exactly "singing in the rain" but were being jolly.

Thank you for that comment, especially as I'd just put it up. In fact, I think I was adding another picture when you left your comment! Yes, I loved it, loved all of Norway in fact and can't wait to go back, this time I want to spend at least one week in Bergen and one in Stavengar, plus more time with the huskies! Yes, we too had rain but it didn't bother us, we tried to act as nonchalantly as the Bergensers did and ignored it! And wasn't the coffee good! As a coffee drinker the country that serves me up good coffee most of the time will always get my vote. Thanks again.

Mari, it is great to hear from another lover of Bergen. I have visited twice and love it. I must say, though, that its reputation for rain is deserved. On our last visit Maureen and I reached the summit of a local mountain, then as we reached the top it poured, and poured, all the way down.We were drenched. Yet we loved it. We got back soaked and went to a lovely cafe before we returned to the cruise ship. I have had great seafood in restaurants there. Once when we were in Bergen the Norwegian navy's giant sailing training vessel was there; and was it not an impressive sight? The sheer size of the masts towering over us! Wow! I love the fish market; and I love the architecture of the town. Some day I will return. Soon, hopefully.

Like most of Scandinavia, Norway is an expensive destination. This article of... 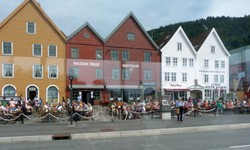 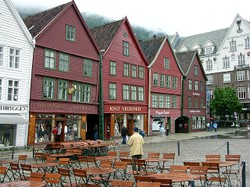 Like most of Scandinavia, Norway is an expensive destination. This article offers budget travelers some tips for a more affordable trip.
100%  23   10 sockii
Italy

Visiting Italy is a dream of many...but is it too expensive to turn into a reality? Not necessary. Read on for my tips to enjoying an Italian vacation on a budget.
Loading ...
Error!