This is a book that I read cover to cover, as it is informative and sustains interest.

The England of green fields and well-cultivated land friendly to humans is an idyll that describes what is known as the champion country of much of the south and the lowlands. But there is another England, besides the sprawling cities and the mountain lands of Cumbria. This is moorland England, large areas of land hard to use and difficult for cultivation, covered in heather and peat bog, and at times dangerous, as its altitude and latitude make it a challenging place to be, especially in winter and storm. William Atkins describes the human experience of this partial desert in an informative and interesting read.

As a lad in South Manchester  I used to sometimes look into the distance at the Pennine Hills, darkly blue on the horizon, and they fascinated me, a vision of another world beyond the flat lowland council estate in which I dwelt. William Atkins came by a slightly different route. For him the introduction to the moor was through teenage trips to Bishop's Waltham Moor, a small moorland area near to his home in the South of England. He uses this experience well, for it serves as a biographical foundation for the book, a small place described at the beginning of a life time's interest in moorland and in some ways the seed from which that interest grew. It is this biographical element that personalizes the book.

The book is well organized, taking readers on a tour beginning with the wild moors of  the South West, these being Dartmoor, Exmoor and Bodmin Moor, then he takes you to the northern moors, beginning with Saddleworth Moor near Manchester and moving northward through Bronte country up to the grim moors of the Scottish borders, Alston Moor, said to be England's last wilderness, and the Otterburn military training areas in the north Pennines. One of the distinct qualities of this book is that while the author follows a format in his organization, he is sensitive to the differences between the areas about which he writes, and so the unique character of each English moorland  is brought out and explored. This provides some character to the book and ensured that I did not become bored while reading it.

This is an English book and Wales and Scotland are absent from its pages, and my much loved  Long Mynd in Shropshire is inexplicably overlooked. It seems though that space necessitated that the author concentrate on the larger moorland areas, but perhaps in doing this he concentrates on those that are to some degree grim and dangerous. In doing this he provides a valuable insight into England's moors, but misses out on some that are easier and more fun to be on.

The Character of the Book

The author shows a breadth of knowledge that does him credit, for his work displays a grasp of botany, history and literature.

He delves into the history of each moor, bringing out the various characters, villainous,  tragic and otherwise.who have made their story. In some ways what he provides is an insight into social and economic history, revealing incidents that contemporary history books overlook. For example, we talk of the Peterloo massacre in Manchester in 1819, but how many histories speak of the government's sending in the Husssars [cavalry] to defeat miners on Alston Moor in the same year. I am sixty five and have only just heard of it. Perhaps they don't want to reveal that the troops and therefore the government were outwitted by local knowledge and that integral to the outwitting was the role of the miners' wives, who managed to provide their hiding men with so much food that as moorland winter approached the troops were forced to compromise. Peterloo was tragic, but the government won; at Alston Moor it lost. So that's not history, is it?

Atkins presents us with sad characters, such as the wounded soldier  who tried to eke a lonely and impoverished life in High Withens, the house upon which Wuthering Heights was based, as he struggled to rescue his wounded mind and body from the horrors of World War One. He tells of rich men with great ambitions to improve the moors and of how the moor defeated them. Their story is blended with that of poor, small farmers who rented the moorland from the rich and tried to grow corn on it,  despite its inadequacy for cereal crops. Sadly Atkins does not link this process to  the iniquitous corn laws that caused corn to be overpriced, and there is a lack of political background to the stories.

He tells of the founding of Dartmoor prison and the long suffering of the prisoners of war who constructed it, and he visits the modern prison for a service. The tragedy of the place soon becomes evident.

He speaks of the moors in our time,introducing characters who work on them. The gamekeepers are a group seldom addressed in literature, and we are introduced to them and obtain an insight into their minds. Yet we also meet conservationists bent on protecting raptors from game keepers.We meet characters who have retreated to remote moorland life so as to live what is for  them an authentic existence. He describes their lives fairly and without romanticizing them.

Where literary connections are pertinent Atkins explores them. Thus much attention is paid to the Brontes  at Haworth, and throughout the book he makes copious references to little known works about the moors which he has read. Thus this is a scholarly work,but a readable one.

Atkins shows his knowledge of moorland biology and geology and this is used to augment other aspects of the work.  For example, he discusses the bog collapse that could have killed all the Bronte sisters, who were out on the moor when it happened, and explains the geological and climatological conditions that caused the event. He also explains the difference between white moor and black moor, traditional terms for moor covered with grass and heather respectively, but he identifies the grass as Bent, a kind of grass species, and links  its presence to the underlying geology of the moor.

The author can engage in serious discussion of the mining that was carried out over many centuries and shows a good knowledge of the various minerals sought and of the problems of mining, both technical and socio-economic.

This is a well-written and interesting work that will repay the thoughtful reader. It is neither light nor heavy reading. The subject matter is not light,and is sometimes grim, such as the Saddleworth murders, never solved, but the style is clear and informative. I read this book with great interest and recommend it to the reader.

frankbeswick, This is the kind of book that numbers among my favorites for reading carefully. Cultural geography is so fascinating, and it's helpful to find a book which is attuned not only to their famous renditions by the Bronte family but also to such respectively known and unknown events as Peterloo and Alston Moor.
Thank you for the share.

Yes, it is non-fiction. I have given but a sample of the depth of experience in the book. Perhaps I understated a little the author's experiences of walking across what at times and places is difficult territory. Sometimes, in bad weather conditions, the bogs can be grim. The bogs of Dartmoor, Exmoor and Bodmin Moor are particularly dangerous, so if you ever get to go to these places, beautiful in their immense solitude that they are, stick to the paths, please!

I get the understanding here that this is nonfiction. If so, it is of even greater value. I believe you that it is complete enough to be considered of value.

Glad to have inspired you to read it. I found it enjoyable and informative.

Thank you for bringing this book to my attention, Frank. It sounds fascinating and although I may never get around to reading it, I have added it to my list of 'books to read', that ever-lengthening book list that I print off every week and take with out between Library and bookshop. It sounds truly a good read.

In 1832 the landlord of the now non-existent inn,the Moorcock, and his gamekeeper son were beaten to death. The landlord survived long enough to whisper "pats, pats." Pats was a nickname given to Irish travelers, who were known to frequent the moor. No one who apprehended the description of a traveler group seen in the vicinity was ever apprehended and the murders are still unsolved.

A great book review, I never heard of the Saddleworth murders. What is that about? 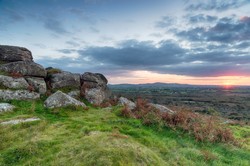 The Irish rose is a variety rare in the wild, and very beautiful.
100%  13   27 Lejouack
United Kingdom of Great Britain and Northern Ireland