Much of the early story of Britain has been lost to the sea.,but archaeology is working to recover it.

Britain is an island, but this was not always the case.To be precise the archipelago which constitutes the British Isles is a flooded peninsula at the edge of North West Europe, which is why much of Britain's encompassing sea is shallow until you get west of Ireland.But flooded lands have left archaeological and geological traces on the seabed, and they are being recovered.

"Arthur is gone, and Tristran in Careol,

Sleeps with a broken sword

And Yseult sleeps beside him

Where the westering waters roll

To the outer depths

Lyonesse is a mythical land off South West Britain, though some scholars think that it was part of Scotland, near Lothian and was wrongly ascribed to Cornwall in the sixteenth century. Some suggest that its Cornish connection is a folk memory of the flooding of much of the Isles of Scilly.The Romans did not speak of the Isles of Scilly, but the Isle of Scilly,indicating that the cluster of isles  is a remnant of a flooded island, and archaeology, which has found the remains of walls stretching into areas now under water  seems to confirm that areas of land were flooded.

On the west coast the Bristol Channel, which separates Cornwall  from Wales, was when early humans returned to Britain a fertile plain, and the famed palaeolithic burial site of Paviland Cave, now on a sea cliff, was once up a hill side.To the north  there is a legend that the wide expanse of Cardigan Bay,which separates the two peninsulas of Wales, was once dry land until a lock keeper accidentally left a flood gate open. This is historically untrue, but truth lies in the acknowledgement that drowned tree stumps  have been found on the seabed.

The English Channel is  an ancient feature, dating back to about 425000 BC, though when water levels fell it must have been narrower and shallower than it is now.Recent archaological discoveries have found artefacts from the Magdalenian period [17000-12000 years ago] on a site in the Channel Islands. But it is unlikely that humans dwelt in the region other than on or near the modern shore lines.

Now for Doggerland, which was the great area of low-lying land that was where the North Sea now lies. Gone for the last nine thousand years it was centred on the old bed of the River Thames, which curved north until it ultimately joined the Rhine. The name Doggerland derives from the Dogger Bank, an area of shallow water in the North Sea, which is rich in fish. This submerged remnant of a range of hills used to attract Dutch fishing boats, known as doggers,hence the name. Fishermen have long been aware that the North Sea had once been land, as their trawl nets often dredged up mammoth tusks and a variety of animal bones, along with stone tools.

Much of Britain's prehistory must have been centred on the low-lying lands now flooded, and the story of the peopling of Britain must have involved people walking across the land from Europe.Palaeolithic folk walked across the marshy plain from Germany to Eastern England;  while others, those who peopled Ireland and West Britain walked along the shores of Biscay and up the English Channel, crossing the sea at its narrowest points so as to trek north to a new home. Boats and rafts are integral to this story, but none have been found by archaeologists. Only marine archaeology can uncover their bones and discarded tools. There are stories to tell and they are worth telling.

During the Ice Age much water was locked up in ice, causing sea levels to drop. At the same time the weight of ice pushed land levels down. As the ice melted sea levels rose, but land began to spring back, partly compensating for the sea level rise. This process is still going on.

While Ireland and Britain are both on the continental shelf, Ireland has been an island longer than Britain has.The earliest parts of the story of its peopling are still mysterious, but boats would have been essential. But both Ireland and West Britain were peopled by settlers from Iberia, so the they both would have needed to be settled from the sea.

Britain's west has always faced the sea, but the sundering of Britain from the continent was due to factors working in the east and north.

Doggerland was doomed to a short flourishing. It had its greatest extent just after the end of the last Ice Age. Steadily rising sea levels had their effect over three and a half thousand years and what were once small hills became islands and swamps became lakes. Geologists and oceanographers have studied its slow demise and decline from a low-lying plain to an area of swamps and islands. It is likely that its population steadily declined during this period. I hope so, as what was coming was calamitous: the Storegga Slide.

Geologists and Oceanographers discovered the debris of the Storegga Slide off the Norwegian coast in the 1960s. Quite simply, in about 6200 BC a huge section of the Norwegian coast slid into the sea in what is known as a submarine landslide. The displaced water created a huge tsunami that raced southwards at high speed. The unpeopled Shetland Isles were hit, but being stone they survived. Areas of the east coast of Britain were temporarily awash, but Doggerland, a low-lying swampland whose hills were glacial clay was simply washed away. Of land in the North Sea only a few spots remained: in the east the Friesian islands and Heligoland, in the west the small islets of the Farnes and the larger Holy Island, off the Northumberland coast.

Of the chalk land bridge between Britain and Europe only the white cliffs of Dover and on the French side Cape Gris Nez remain.

The loss of land to the sea continues. There are the Goodwin  Sands, a ten mile long sandbank off the coast of Kent, England's most south-eastern county.This infamous sandbank contains no stone age archaeology, but it is thought that over the centuries two thousand ships have perished in its deadly shallows. How much remains embedded there is yet to be ascertained. Some traditions say it is flooded land once belonging to Earl Godwin,and that it is a remnant of Doggerland, but other think that the Goodwins never were an island.But this sandbank, whose lethal character derives from its proximity to sealanes in the English Channel,is composed of sand fifteen feet deep lying atop a bed of clay, so when ships are driven onto it they get stuck hard and fast.I think it apt to describe the Goodwins as a tidal island.

Britain is losing land to the sea on the East Coast, and it is thought that since Roman times the coast has receded by three miles  as the soft cliffs of boulder clay erode in winter storms. The fate of Dunwich in East Anglia is illustrative. In 1285 it was a port that rivalled fourteenth century London. Now it is a village. In 1286 a storm surge did much damage and part of the town was washed away, and in  1287 a storm finally destroyed the port. Local legends say that sometimes you can hear church bells tolling under the sea.You cannot, I assure you.

Not long ago the North Sea got a new island when the permanently manned lifeboat station at the tip of Spurn Head, a long thin peninsula at the mouth of the River Humber was cut off by a storm and became a tidal island.The lifeboat crews and their families were safe as it was only the narrow neck of  the peninsula that was cut,but it shows the power of the sea to steadily eat away at the land.

You cannot stop the sea. Hard barriers made of concrete merely redirect problems and can smash in storm waves.Modern thinking is to take down some of the walls and allow controlled flooding to create salt marsh, for coastal marshes absorb the sea's energy without shattering like a concrete or stone will.But one thing is certain, the sea has not finished with us yet.It destroys land in some places and creates it in others, depositing what it eroded elsewhere. The cycle is endless.

frankbeswick, Thank you for setting me right on Harold the Fair's death.
No wonder the Bayeux tapestry story is more accessible on this side of the pond: an immediate death. The brutality of multiple slashes by multiple murderers would explain why Edith of the Swan's Neck needed to be called in to identify which of the disfigured bodies was Harold the Fair's. Or was that not what happened?

Derdriu, it is so good to hear from you again.

I think that the trees were oak and lime. Nature was the cause of the flood.

What course history would have taken I know not, it cannot be known. But I think that we would have been more distant from France and politically closer to Scandinavia, as the Anglo-Saxons were closer to the Norse than they were to the French and Germans. The idea that Harold was killed by an arrow does not square with accounts of he battle, which say that he was surrounded by nights who slew him. The myth of the arrow is derived from the Bayeux tapestry.

FrankBeswick, Thank you for the information and the products.
And yet the rainbow affirms Great God Almighty's promise never to destroy the world by flood again.
Is it known what kind of trees left their stumps on the Cardigan Bay seabed and whether they were severed by humankind or by nature?
What course would British history have taken had Earl Godwin not been killed by an arrow in his eye at the Battle of Hastings?

The break down of the chalk landbridge between Britain and France would have released a mass of water,which as you say would have been forcible enough to widen the gap, but water would have entered the channel from the west anyway.Britons would have been cut off, but boat travel has been well-established for a long time by then.

Frank, I watched an interesting video on the English Channel in which a theory was proposed of an inland water eventually breaking its barrier. it was elevated, so a flow of rapidly moving water cut ts way to the sea. They use matching the white cliffs to white chalk in France, and elongated submerged features that indicate a rapid water flow. Elevated large bodies of water can discharge rapidly and pour water from a weak spot that quickly erodes into a large opening. This would have cut off the land bridge leaving hunters marooned to populate Britain.

Ancestry Can Cause an Interest in History

Looking at one's ancestry can be an excellent way to develop an appreciation ... 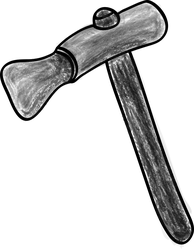 A genealogy search can be a rewarding experience, giving one insight into history and culture of one's early family. And, the surprises can come at any time making it interesting.
55%  25   2 blackspanielgallery
Europe

Ancestry Can Cause an Interest in History

Looking at one's ancestry can be an excellent way to develop an appreciation of history.
54%  13   2 frankbeswick
Europe