The White-tailed Eagle, sometimes known as the Sea Eagle, is a close relative of the American Bald Eagle. They were once absent from Britain's skies, but now they're back.

The last remaining White-tailed Eagle in Britain was shot in 1918. This took place on the Isles of Shetland, Scotland. Their numbers had been declining for many years due to the destructive actions of farmers, gamekeepers, fishery managers and collectors of eggs and skins. There was no other factor in their decline. More than 50 years later, a reintroduction scheme was launched and a pair of White-tailed Eagles bred successfully in 1985. Since then, they've slowly managed to regain a foothold in the Inner Hebrides of Scotland and this majestic bird can be seen once more in the skies over Britain.

The Story of British White-tailed Eagles 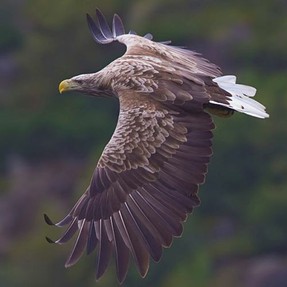 The White-tailed Eagle is a huge bird, the second largest eagle after the Steller's Eagle. It does, however, have the greatest wingspan of all eagles, giving it its nickname, the Flying Barn Door.

White-tailed Eagles are sometimes know as Sea Eagles, especially in Britain where they have been  historically associated with coastal areas. They live on a diet of mammals, birds and fish, and they're quite capable of snatching live fish from the water in spectacular style.

The White-tailed Eagle was once widespread throughout the British Isles, especially in Scotland and Ireland, but also in England and Wales. Numbers began to plummet in the 1800s, due to human persecution. The Victorians were either prejudiced against any bird with a hooked beak and shot them, or were fascinated by them and sought their skins for mounting and their eggs to add to their macabre collections. The White-tailed Eagle wasn’t alone in being persecuted, but it was one of only a few birds that were actually driven to complete extinction in Britain.

By the 1970s, our attitudes towards wildlife had changed and, in 1975, a programme for introducing White-tailed Eagles began in Scotland. Over the period of ten years, more than 80 young birds of Norwegian stock were released on the Isle of Rum in Scotland’s Inner Hebrides. One pair bred successfully for the first time in 1985, and further young birds were released during the 1990s to ensure a viable population. Since then, the breading population has continued to grow. According to the Royal Society for the Protection of Birds (RSPB) there are at least 42 breading pairs in Scotland today. The actual number is probably substantially higher than that.

About Birds in Britain

Where Can I See White-tailed Eagles in Britain?

The first White-tailed Eagles were released on the Isle of Rum, but it’s the Isle of Mull that’s become the biggest stronghold for breading eagles. Mull is one of the larger islands in the Inner Hebrides, and it can be reached quite easily by ferry from Oban. The White-tailed Eagles of Mull have had to compete for territory with resident Golden Eagles. Nonetheless, the island now has one of the highest numbers of eagles per square kilometre than anywhere else in the world. It’s no wonder Mull is sometimes called Eagle Island.

The Isle of Mull is one of the best eco-tourist destinations in Europe. Apart from eagles, there are numerous sea birds and mammals, including otters, dolphins and whales.

Welcome to the Glen Seilisdeir sea eagles
The best way to see White-tailed Eagles on Mull is to visit this Forestry Commission site - you will need to book in advance.

Mull Sea Eagles Diary
A diary from the conservation team at Seilisdeir on Mull.

I hope these birds continue to recover! Bald eagles in North America, which were once endangered, have become really abundant and I see them pretty regularly. I even saw one in Philadelphia, over the Schuylkill river, recently.

Farmers continue to air their concerns about White-tailed Eagles. They seem mostly worried about their lambs and some are killed by eagles, there's no doubting that. What seems to be the pattern is that White-tailed (and sometimes Golden) Eagles make opportunist killings of weak or unviable lambs, even then the numbers are very few. They also eat lambs that have already died. When you compare the 'damage' eagles do to the benefits they bring, like wildlife tourism especially in places like Mull, the harm is infinitesimally small.

Red Kites in Britain used to be confined to mid-Wales. There were just a coup... 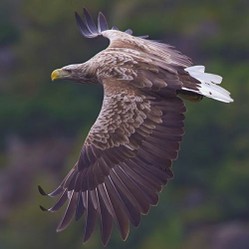 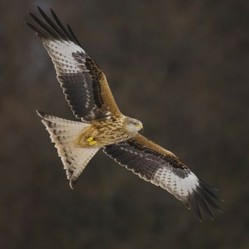 Red Kites in Britain used to be confined to mid-Wales. There were just a couple of dozen birds left when I was a child, and the chances of seeing one was virtually nil.
100%  12   10 cazort
Wild Birds