Christianity has its own meditation techniques which have not been as well popularised in recent years as the techniques of eastern faiths have been.

Think of meditation and it is likely that you think of a person performing a yoga pose and emptying their mind, possibly to the sound om. This is Eastern meditation and belongs to religions of the Indian tradition, such as Hinduism, Buddhism and Jainism. But there is a different tradition in Christianity that has been neglected in recent years. In Christian practice meditation can develop into a stage of prayer higher than meditation, which Christians call contemplation or mystical prayer.

The modern state of affairs

in recent years meditation has acquired a reasonable degree of popularity in the West. It began with the hippy movement and the Beatles' visit to India to learn transcendental meditation from the Maharishi Yogi. Zen Buddhism has enjoyed some popularity in parts of America and Europe. These developments  are due to the fact that in the modern world faiths are no longer restricted to specific areas, and you can find a wide range of religious beliefs in any part of the world, except totalitarian states where religion is suppressed, such as North Korea, and Islamic states such as Saudi Arabia.Within two miles of my home in satellite town of Manchester, England, I can find two Buddhist meditation centres and a Hindu temple.There are Sufis a little further away, practising their own meditation techniques. Each religion has its own techniques of meditation that rise out of its particular view of the world. There may be overlaps between meditation techniques, but there are differences.

Christian mediation is focused on the Christian's relationship with God, who may or may not disclose his presence in prayer. The Christian meditator may focus on the idea of God or some particular aspect of his character, or he/she may focus on Christ, thinking about an event in his life. Others may focus on a saint's life or a particular virtue, especially one that they lack. There are therefore several techniques of meditation available to the worshipper.

The first condition of meditation is silence. In Christian thinking silence is the time when the gentle, quiet "voice" of God is heard.  This is why in Christian religious institutions after lights out they have a practice known as magnum silentium, the great silence, which lasts until after morning prayers. During the night the monk is expected to focus on religious matters in the silence provided by this institution.

Silence is the reason why many meditators have sought out lonely places. Hermits used to find secluded spots to meditate, and thus some would seek lonely islands to perform their hours of prayer. The Trappist monks, a branch of the Cistercian order, have a rule that speech is only to be used when necessary, and much of their day is spent in silence. The Carthusians, who spend their day in their cells, studying or at prayer, except for the afternoon work, spend most of their lives in silence when they are not at services.

The silence on the outside is merely the tool for the inner silence which Christians believe to be essential to meditation. For Christian meditators the absence of external noise is a tool towards the attainment of inner stillness. This stillness involves the calming of the emotions and uncontrolled thoughts. These can be stirred by external distractions, and so avoiding distractions is important for meditation. However, controlling thoughts that can be impulsive and intrusive is never easy and takes a great  deal of self-discipline and practice. No one said that meditation was going to be easy.

All this having been said, some meditators require a stimulus. This is often literary, in the form of Scripture, but it is possible that some are inspired by music. Certainly, Catholic plain chant is designed to calm the emotions, and having heard this at some time during the day is means by which a person can approach the state of inner stillness that is necessary to meditation.

It is important to realize that body posture is a matter of disagreement. Some people happily take up the techniques of yoga, but other Christians do not feel that posture is important. The posture to be taken varies with the individual and there are no hard and fast rules. Any position in which one is comfortable is sufficient.

One technique which is recommended for less experienced meditators is taking a prayer, such as the Lord's Prayer and reflecting in its meaning, line by line or phrase by phrase. This provides a structured way of reflecting with a constant stimulus. Another technique is to take a Bible story and compose the scene in your mind, spending time reflecting on it. This is again useful as it provides a stimulus. Reflecting on scenes from nature is another way of thinking on the works of God. Another version of this is meditative reading, in which the stimulus comes from thoughtful reflection on a book. This may or may not be the Bible, as the meditator chooses. It is also possible to reflect on a religious picture.

Others take an idea and reflect on it. It is of course possible in more advanced meditation to directly think about God himself, and this can take the meditator up to higher levels of meditative thought, as they try to become more sensitive to the divine influence in their prayers.

One valuable technique promoted by the Eastern, Orthodox Church is the Jesus prayer. The aim of the Jesus prayer is to become absorbed into the idea of Christ so that it fills the meditator's mind. The prayer involves the quiet and constant repetition of the name Jesus until it sometimes takes the worshipper into a kind of trance. This prayer is said to be useful for people who want to meditate as they walk along.

Contemplation goes further than meditation, and you do not control it. For Christians meditation is only the second stage of prayer, one up from vocal prayer. But there are higher levels. The higher level is contemplation, and unlike meditation it is not under the control of the one who prays, for the person praying is more under the divine influence than the meditator is.

There are lower and higher levels of contemplation. The lower levels contain a level known as affective prayer. This consists of a state in which the individual is in a permanent disposition of feeling well disposed to God and easily slips into a state of lovingly thinking about him.  Above this level is considered to be the prayer of simple gaze, a state in which the person praying has achieved the ability to ponder  the truths of religion in an intuitive way. Sometimes this may involve refllection on the divine presence, but this state cannot be achieved through human power and is regarded by Christians as a divine gift. How many people achieve this level is unknown.

There are higher levels of contemplation, and these tend to be attained only by contemplatives, people who spend their lives in monastic institutions. At these levels we come into mysticism proper. The lowest of these levels, though high enough, is the prayer of quiet, when the contemplator stays passively in the divine presence. Contemplation rises through semi-ecstatic and then ecstatic states, in which the subject becomes more aware of the presence of God and in the latter has become completely passive, until the ultimate state, mystical union, which is sometimes known as the mystical marriage, in which the subject becomes one with God, not in the sense of losing one's identity and becoming merged, as pantheists hope, but in the sense of full communion of beings in total love. This is a  rare state and it lies beyond my experience. All I can do is point to its possibility, rather like a Buddhist speaking of nirvana.

I think that it is worth saying that contemplation should be practised under the guidance of  a spiritual adept, as it is the case that travelling in the realms of spirit brings pitfalls that can be hard to handle.

In our western society we speak of meditation as though there were only one kind of it. There are, however, varieties of meditation, according to the religion from which a meditative technique arises. While there may be similarities between the varying kinds, there are also differences. Christian meditation seeks unity in love with a personal God, while for Buddhists there is no transcendent personal God to relate to, though there are higher being within the world who can help humans. It is not therefore possible to graft the techniques of meditation from one religion into another without there being some reflection on their suitability. Foir instance, the Zen koan, the unanswerable riddle intended to break up conceptual thinking, has no role in Christian meditation, as it does not lead to a personal relationship with God.

However, cross fertilisation between religions is possible, and I have personally found that having studied world religions along with Christian Theology and Philosophy is a great benefit to me, though my meditation is entirely within the Christian tradition. Some Christians do use yoga techniques of bodily discipline, though there are Christians who rightly point out that the Samkhya system of Hindu thought, which is associated with yoga, has no similarities to Christianity. I do not agree with those evangelical Christians who think yoga Satanic, but for Christians it is a human technique which might be helpful to some people, though it is not necessary.

For Christians meditation is not the only kind of prayer. Even a monk/nun skilled in contemplation will have to take part in the verbal prayer of the liturgy, the formal worship of the church, and anyone who retreats purely into private prayer is living a defective Christian life. Christanity is a communal faith and it expresses itself in communal prayer. Even the severe desert fathers, the monks and hermits of Christian Egypt,who practised advanced contemplation, came in from the desert to worship with fellow Christians and went to communion once a year.

Meditation is good for all. There are various meditation techniques and the fruits of them vary. The results also depend on the individuals. Your article gave me an insight on Christian meditation. I do a type of meditation which has its origin in Buddha and I feel very peaceful.

This is very interesting. I cannot clear my mind to do Eastern meditation, but now I realize I have been doing Christian meditation all of my life. I read every word of your article, and I'm going to take a look at the books you suggest. Thank you. 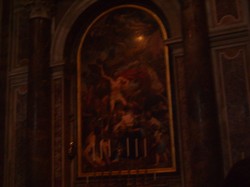