Classic Films to Watch on VHS Video but in HD

You may not have watched them for years but there are always some old favourites that hold a special place in your video collection and now you can re-watch them in HD
We all have them, even if we temporarily overlook them in favour of the latest blockbusters, but really, a good old classic is hard to beat – it’s time to return to the golden age of cinema before laser-shooting robots and fake documentary film making became all the rage.

Gone with the Wind

One of the All-time Classics of Cinema

Clocking in at 238 minutes, you’ll need to set an afternoon aside to relive this tale of love and betrayal during the American Civil war. Played by Vivien Leigh and Clark Gable, Scarlet O’Hara and Rhett Butler’s turbulent love story is played out against an equally stormy backdrop of fighting, death and decay.

Gone With The Wind

Another timeless love story; the beautiful Ingrid Bergman and rugged Humphrey Bogart play former lovers who bump in to each other in occupied Africa at the start of the Second World War. I actually only watched this for the first time recently (it was one of those ‘I really should watch….’ films) and I wish I’d watched it years ago. A great film!

Alfred Hitchcock’s unforgettable tale of horror, murder, shower curtains, creepy mothers and knives is one to relive again and again. Still as scary as it was when it was made, pay the Bates Motel another visit when you’re next feeling in the mood for a sleepless night! Just don’t take a shower….

Worth watching again and again for Audrey Hepburn’s iconic portrayal of the quirky New York playgirl, Holly Golightly who is determined to marry a wealthy playboy but instead finds herself falling for a struggling writer. If you haven’t seen it before – watch it -the will they-won’t they storyline will keep you guessing until the very end.

I loved the ending of this Jack Lemmon, Tony Curtis and Marilyn Monroe film when I first saw it as a 12 year old. Playing musicians who inadvertently witness a mob killing, Lemmon and Curtis go on the run disguised as women as part of an all-female band. It goes without saying that complications soon arise, mainly thanks to Monroe’s typically voluptuous and breathy Sugar Kane. In fact, I haven’t watched this for so long – I’m going to re-live the retro fun next weekend!

HDMI Converter
If you own an older model DVD or VCR with a SCART connection this converter will up-scale your signal so that you can connect it to your newer high definition HD TV.

Get a Bargain VCR

I admit to having a VHS player after all why let so many great videos on VHS go to waste. :)K 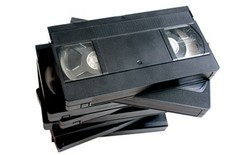