Watching our backyard birds brings us great joy, especially during the winter months. Here are the most common winter birds we see in our backyard in SE Michigan.

It's delightful to be able to look out into our backyard on a cold, snowy winter day, and see the birds that have stayed around during these harsher months.

They're not as numerous or as vocal as they are during the warmer months, and there isn't as much variety, but they're a joy to watch, flitting around in the bushes, hopping around the ground, or visiting our bird feeders.

Our common winter birds add interest to an otherwise quiet, cold, and often cloudy winter day in our area.

Winter Birding in Our Backyard 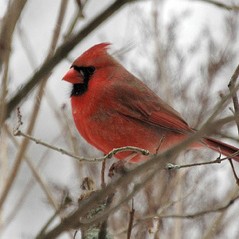 We enjoy watching the birds in our backyard all year, including during the winter.

Most of our winter backyard birds are also here during the summer, although there are a few species that migrate to or through our area during the winter.

The birds I'm featuring here are common to SE Michigan during the winter, but they're also common to many other areas of North America during the cold months.

The male Northern Cardinal, with its bright red color and jaunty crest, is my favorite winter bird, although the female is very pretty as well.  If you live in the central and Eastern parts of the United States,  most likely you're familiar with this striking bird.

The male cardinal is red, with a crest and bold black coloring around the face, and the female is mostly tan with some reddish coloring in the crest and wings.   She also has a red beak.  Both the male and female Northern Cardinal stand out brightly against a drab winter background.

While we commonly see cardinals in the winter, we don't  hear much from them until sometime in February, when they start singing again.   That's a very early sign of spring in our area!  These brilliantly colored birds stay in our area year round.

Why Are Cardinals Red?

You've heard the saying,"You are what you eat."  Did you know that cardinals are red because of what they eat?  And it's the same with many other red, orange, and yellow birds.

Sweet little bird -- one of our most common backyard birds

The black-capped chickadee is undeniably cute, with its trademark black cap and throat, gray wings, and light belly.  This is another bird that we see year round.   If you live in the northern U.S. and southern Canada, you will have seen this cute little bird.  (Other species of chickadees have ranges north and south of this range, with some overlapping.)

Chickadees are very curious, and will come investigate people, especially if we're holding a few tasty black sunflower seeds in our hands.  Another way to attract them closer to us is to make a soft "shwishhing" sound.  Perhaps they think there's a succulent insect nearby!

We start to hear the chickadee spring song, a 2 or 3 note whistle (fee bee, or hey sweetie), in late winter or even in mid-winter on a sunny day.   The chickadee call (different than its song) gives the bird its name, "Chick-a-dee-dee-dee".

House sparrows do well wherever humans live.   Where you find human communities, you'll find house sparrows.  They're found in most of North America, as well as many other places in the world.   Because they're so common, we tend to ignore them, or shoo them away to try to attract other birds, but they're fun to watch anyway.   The males are more boldly patterned than the females (see photo examples below).

House sparrows don't really have much of a "song", but a plain, bright congenial-sounding chatter that I find appealing, especially when a small flock of house sparrows are chattering together in the bushes on a sunny winter's day.

House finches at first glance look similar to house sparrows, except the males have a rosy red coloration around the face and chest.   Female house finches are more of a nondescript gray brown with streaks.  During the summer the males have a lovely, long jumbled warbling song, but they're quiet during the winter.

House finches are originally from the west coast of the U.S., but were introduced in Long Island in the 1940's and have thrived and spread across most of the country since then.   I don't remember seeing house finches in our area until the early 1990's, but they're very common now at our feeders throughout the year.

Did you know that the red pigment of the male house finch feathers comes from the food he eats?   Some males are more yellow or orange than reddish, depending on their diet.

Downy woodpeckers are small birds that like to hang out with other small birds such as chickadees and nuthatches.  We often see all three species at our bird feeders during the winter and summer.

Male downy woodpeckers have a small bright splash of red at the back of their head -- otherwise both male and female look alike.

When our boys were in early grade school, I went along on a winter outdoor school field trip with them, and we were able to attract these pretty little birds and chickadees to eat sunflower seeds out of our hands.  What a treat!

These small birds may also flock with other small birds such as chickadees and downy woodpeckers.

Used to be called slate-colored juncos

We see these common, soft-gray colored sparrows on the ground during the winter, foraging for whatever has been pushed off the feeders by other birds or squirrels.

In general, dark-eyed juncos have dark gray backs and heads, and light-colored bellies, although there's a fair amount of variation in their plumage.  Males tend to be a little darker than female juncos.

Although they may be seen year round in northern Michigan, we generally see them only during the winter in southern Michigan.

Drab coloring in the fall and winter

Male American Goldfinches are hard to miss during the summer with their flashy bright yellow and black plumage, but may be overlooked during the fall and winter when they're an unremarkable drab gray-green.  Females are an olive color during the summer, and more nondescript during the winter like the males.

The American Goldfinch is the only finch that molts twice a year -- once in the late winter, and again in the late summer.

We see them at the bird feeders year round, but especially during the winter when food is scarce elsewhere.

You can attract goldfinches to your own yard if they live in your area.

While the birds featured on this page are among the most common birds we see during the winter in our own backyard in SE Michigan, there are a number more that we also see, including:

and even sometimes the American Robin (visit Robin in Summer, Robin in Winter)

Learn to Attract and Identify Birds in Your Own Backyard

Birds of the Garden: Winter Birds

Lovely posters to adorn your walls!

What Else Do We See in Our Backyard?

Backyard Birding -- Common Birds in Our Backyard
Some of the most common birds we see in our backyard in SE Michigan.

Birding by Ear - Bird Song Identification
Learning to identify birds by their songs and calls.

Robin in Summer, Robin in Winter
Many robins migrate south for the winter, but some stay here if they can find enough food.

Bird feeders for Attracting Birds to Your Backyard
Attract more birds to your backyard by putting out the right kind of bird feeders and bird food.

Fireflies in Our Backyard
Fireflies are a lovely sight in our backyard during the summer.

Squirrels in Our Backyard - Michigan Squirrels
We have three, possibly four, different species of squirrels that visit our backyard.

Are You a Winter Birder? What Birds Do You See Most Often in the Winter?

I love birds, just put out all my seasonal bird feeders. I'm an avid at home bird watcher, it's amazing what types of birds you can attract to your home. Great Wizz!

This is a beautiful piece of writing - I love reading about birds - especially in the winter. This is the first time I have made it to Wizzley I think, if this an example of the quality I will come back. :)

Very interesting and informative article! I love to watch and identify birds and this is especially fun in winter when they come to the feeder.

I enjoyed reading this article because it is interesting for me to see which of the birds you mention I notice around my area (I'm from Germany) as well. I'm familiar with the chickadee but not the black-capped one - it looks quite similar to ours though. I also know the sparrow and the nut-hatch.

It would be a treat to see a Northern Cardinal, a white-breasted nuthatch or the American goldfinch in its summer yellow - what beautiful birds!

I had been wondering why I had not seen Goldfinches at my feeder. I only saw drab sparrow like birds. Thanks for letting me know what to look for Now I am pretty sure that my Goldfinches are still coming but in their winter plumage.

Thanks for your comment, Brenda. The cardinal is a favorite of mine too. I didn't know it was the Kentucky state bird -- it's a good choice!

I moved from CA to KY six years ago. I just love all the beautiful birds. The Northern Cardinal is my favorite all and the KY state bird. I have to keep my cats in the house when spring starts up so they don't kill them. They're staying in right now because it's too cold for them outside.

It's great to hear what you see in the western part of N.A., sheilamarie. I don't get out west often, and I'd love to see more hummingbirds, golden eagles, stellar jays, etc.

Since I've moved from eastern N.A. to western, I enjoy a different group of birds now than I used to see. I must admit there is a greater variety of songbirds in the east and I do miss so many of them (the cardinal, the goldfinch, the bobolink, the red winged blackbird, I could go on!) What we see here, though, are pretty wonderful too. We have more woodpeckers and hummingbirds (in warmer weather) and several birds of prey, like the bald eagle, the golden eagle, and the osprey. We also see grouse that beat their wings on the ground, wild turkeys (which we also saw in Vermont). And I can't forget the ravens and the stellar jays! Both of these birds are quite cheeky. There are amazing birds here, too, but they aren't as plentiful, probably because of the kinds of vegetation. Now that it's winter, there are even fewer birds.

Thanks for your comments, Lindsey, and Deepak!

Honestly I really don't like birds as I am annoyed when it chirps...But looking on these lovely birds, I might disregard the noise it makes. 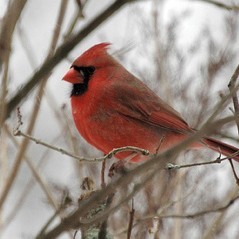