This is an incredibly simple yet powerful movie based on a true story of a sister fighting to get her wrongfully-convicted brother out of jail. Warning: Spoilers.

I watched this last night on TV. Didn’t think much about the movie at first and missed the first few minutes, but then was pulled in by the acting and stayed to watch, even though the general gist of the movie was predictable.

Hillary Swank, who was so amazing in Million Dollar Baby, plays Betty Anne Waters. Her brother is wrongfully committed of murder and we learn from the start of the movie that she plans to go through Law School in order to get her brother out of prison.

Betty Anne’s husband is not supportive, so they separate, and soon her teenage sons discover that they need a man in their life, so she loses them as well. It could all become very melodramatic in dialogue and acting, but it never does, except, a little, in the flashbacks, where Betty Anne and Kenny are shown as kids, engaging in mischief and then being separated from their mother and each other.

The acting for the action taking place in the present is really, really good. What you would, by now, expect of Hillary Swank. But there’s also Sam Rockwell, who does a great job playing Betty Anne’s brother Kenny in a very nuanced, understated yet poignant way. The acting, directing and general style of the movie had me thinking of some of the latest Clint Eastwood movies. With the exception of the flashbacks – which were not as good as they could have been, leaning towards melodramatic territory.

Here’s the story. Kenny is accused of first-degree murder. Everyone but his sister abandon him. After three years in jail, Kenny tries to kill himself. He is convicted for life without parole and doesn’t expect his circumstances to change.

I don’t know if it’s now that she decides to continue her studies, but I think it is. She gets her GED in order to be able to go to college and then to Law School. As she gets to Law School, she also finds a new friend, one she needed because she doesn’t have many people in her life to support her and her goals. Minnie Driver as Abra Rice is one of the few, if not the only one, who does, and even she has her doubts about Kenny’s innocence. And yet it’s Abra who makes sure Betty Anne gets out of bed when life gets too heavy, and back to studying.

Conviction DVD – includes as a special feature a conversation with Tony Goldwyn and the real Betty Anne Waters.

Soon the doubts about Kenny’s innocence are dispelled as during her studies Betty Anne learns that there’s a new type of evidence that she can use to prove Kenny could not be the murderer the system took him for. That type of evidence is DNA.

Nothing very surprising here but then we follow Betty Anne as she tries to find the old evidence for the case in order to use DNA profiling to prove Kenny’s DNA is different from the one lifted at the scene of the crime. Betty Anne and Abra embark on this new mission of finding the old box of evidence. Eventually, after many phone calls and after showing up in person to try to convince various people to look for it yet again, one woman appears holding a box in her arms. And it is the box, despite the fact that according to rules that were in place at the time, it should have been destroyed 10 years after the trial. When the two women, now attorneys, are looking for it, it's 16 years or so after the trial. That was the second piece of luck, the first one being that Massachusetts, where the story takes place, didn’t have the death penalty.

After they find the box, they learn that Kenny could still be charged with being an accomplice. So Betty Anne and Abra, together with the man behind the Innocence Project set about to getting affidavits from the women who testified against Kenny at the initial trial: his wife and another woman he had been involved with. It turns out they were intimidated and pressured into lying by a former police officer who manipulated the case. It’s not clear why, but we are given reasons to believe she may have had a grudge against Kenny.

Now of course, the women who retract their testimonies and make different ones are wondering about the legal repercussions of committing perjury. At the prompt of her daughter (Kenny had a daughter) and her own conscience, Kenny’s ex-wife decides to sign nevertheless.

After 18 years, Kenny gets out and embraces life as a free man again. His daughter, who never received his weekly letters, is there to meet him and enter his life again.

I’ve spoiled this film for you but did it knowing that its strength is not in the storyline, which is rather straightforward and predictable. It’s rather in the acting, the directing. The editing was too visible, too choppy, even though the sequences themselves were timed just right and nicely juxtaposed. It was a character-driven story and somehow the actual action was spliced too much, making the movie feel too fragmented. Still, it was a good movie. Watch it for Hilary Swank and Sam Rockwell! Unlike better-edited movies, their acting is memorable.

Oh, no. How terrible. Thank you for your great comment, Derdriu!

Mira, This is such a compelling film that I'm glad that you've drawn attention to it with your review. I've seen "Conviction" several times and expect to watch it again and again over the years. What Betty Anne was willing to do for her brother is nothing short of amazing! Also appreciation of the efforts of Barry Scheck's Innocence Project is gained from watching this movie. Excellent acting by one and all, including Melissa Leo who is completely despicable as the corrupt copster.
The real spoiler, sadly, is that Kenny passed away only 6 months after his release from 18 years in prison for a crime he did not commit. He fell from a 15 foot wall while taking a shortcut to a restaurant.

Hi Sheri, I'm so glad you liked it. :-) Thank you for sopping by to read the article and let me know.

Saw the title to this article and your spoiler and decided to see the movie before I let you spoil it for me. I took a break from work and watched the film and loved every moment of it, including what you found verging on over-done. You are right - great acting. I'm a sucker for true stories. 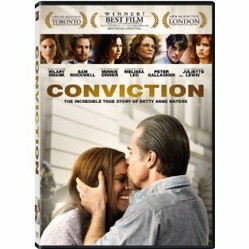 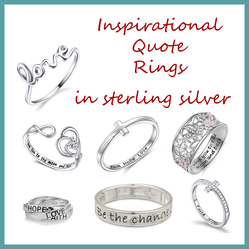 Valentine’s Day is a time when many people buy rings for their special one. Consider buying a quote ring if you believe in love, hope, and the power of faith.
100%  29   19 Mira
Other Gadgets