Daguerreotype is a photographic method developed by Daguerre in 1839 consisting of a positive image formed by mercury vapor on a polished coating of silver on copper plate.

Perhaps the best known early photographic process is the daguerreotype introduced in 1839 by the French painter, Louis Jacques Mande Daguerre.

During the early stages of his investigation, Daguerre was associated with another French experimenter, Joseph Nicephore Niepce.

Niepce was interested in making lithographic printing plates by the action of light instead of drawing on stone.

His process, called heliography, consisted of exposing, behind a transparent drawing, a metal plate coated with a thin layer of asphaltum which hardened under the influence of light. Although satisfactory as an engraving process, this method was useless for photography because of the great insensitivity of the asphaltum. Niepce formed a legal partnership with Daguerre in 1829, and they tried with some success to improve the process. After the death of Niepce (1833) Daguerre worked on it alone, with the understanding that Niepce's son, Isidore, would be informed of results.

About 1831, Daguerre began experimenting with silver-plated sheets of copper, which he fumed with iodine vapors to form a layer of silver iodide.

These were exposed in the camera obscura for several hours to produce a visible image.

For several years he tried in various ways to shorten the required exposure time until finally, in 1837, he found that images could be obtained on plates with only a few minutes' exposure, provided the plate was subjected to the fumes of mercury after the exposure.

The mercury condensed on the exposed parts of the plate and produced a positive image. To render the image permanent, the unexposed silver iodide was removed with a solution of common salt. The process was described briefly by Dominique Francois Jean Arago on January 7, 1839, at a meeting of the Paris Academy of Sciences, and was published later that year.

In August 1839, the French government gave a life pension to Daguerre and to Niepce's son on condition that the invention be made public without patent.

The making of daguerreotypes became very popular in many countries including the United States, where it was used extensively by Alexander S. Wolcott (1804-1844), John W. Draper (1811-1882) , Robert Cornelius (1809-1893), and others. Exposures were shortened to a matter of seconds by the use of silver bromide, and by the introduction of the portrait lens, which admitted more light than did the lenses used in earlier experiments.

Develop your own photo prints

In 1834, while Daguerre was working to improve his process, an Englishman named William Henry Fox Talbot began experimenting independently on ways of sensitizing paper to use it in the camera obscura. He succeeded in making a more sensitive paper than any made by Wedgwood and Davy, and with it he photographed the outlines of a latticed window in his home, Lacock Abbey, in August, 1835.

To sensitize the paper, Talbot used successive washings, first with a solution of common salt and then a solution of silver nitrate, to form silver chloride. While still wet, the paper was exposed in the camera obscura for about an hour, or until a visible image appeared; this was fixed by dissolving the unexposed silver chloride with a st rong solution of common salt. Subsequently, in 1839, at the suggestion of Sir John Herschel, he used hypo (sodium thiosulfate) as a fixing agent.

In January 1839, about the same time that Daguerre's process was publicly described in Paris by Arago, Talbot read a short paper and showed examples of his work at a meeting of the Royal Society in London. He called his process photogenic drawing.

Talbot apparently was fully aware of the shortcomings of his process and worked intensively to overcome them. He made an important discovery in the fall of 1840, when he found a method of developing the latent image. The sensitiveness of his paper had been increased greatly by using silver iodide instead of silver chloride, and by bathing the paper before exposure with a solution containing silver nitrate, acetic acid, and gallic acid.

After an exposure of about one minute, a very faint image could be developed fully by bathing the paper again in the silver nitrategallic acid solution. The negative image so obtained was then printed on another sheet of sensitized paper and developed in a similar manner, and a positive photograph was obtained.

Talbot called this improved process calotype; later it came to be known as talbotype in his honor.

Since the method had all the elements of photography as it is known today, including exposure and development of a latent image to form a negative from which a positive is printed, many historians call Talbot the father of modern photography.

The use of a paper negative, because of the inherent grain of the paper, limited the definition of the image.

He chose glass, and in 1847 succeeded in coating it with egg white, or albumen, as the carrier for the silver iodide. Gallic acid was used for development. The quality of the resulting negative image was said to be good and of fine grain.

There are five steps in the daguerreotype process:

1) Preparing. A sheet of copper carrying a coating of metallic silver (produced by electroplating, or by the Sheffield plate process) is buffed to a very high polish.

2) Sensitizing. The plate is exposed to iodine vapour in a light-tight "iodizing box" until it is uniformly covered with an orange coating of silver iodide. This coating is light sensitive.

3) Exposing. The plate is exposed in a camera for anything up to twenty minutes in bright daylight. The camera lens was sometimes equipped with a reversing mirror since the image produced is a reverse (right to left) positive.

4) Developing. The image is developed by exposing the plate to the vapour of mercury heated to 140° F (60° C). The mercury amal gamates with the silver and clings to the high lights.

5) Fixing. The unused silver iodide is washed off with a weak solution of sodium hyposulphite (common salt solution was used originally). After washing, the image is now permanent; the highlights consist of a milky deposit of mercury amalgam and the shadows of plain polished silver. Daguerreotypes went out of fashion after the introduction of the wet collodion process.

PhotographyLens MountsSpirit Photography
Disclosure: This page generates income for authors based on affiliate relationships with our partners, including Amazon, Google and others. 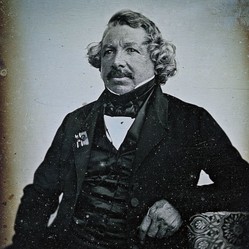 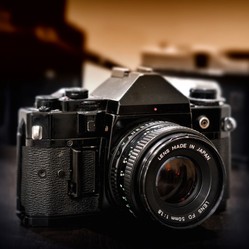 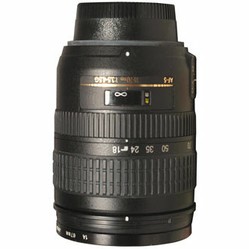