In England the name Devon evokes green rolling landscape, along with beaches, cllffs and moors.

Devon is England's second most south-westerly county, a place popular with a wide variety of holiday-makers. You can visit it for the beaches,for it has northern and southern shores, the former on the Bristol Channel and the latter on the English Channel; you can enjoy walking in the narrow, winding English lanes or along moorland footpaths on Dartmoor and Exmoor, on the latter sometimes seeing the wild ponies, a native breed that goes back to the Ice Age. Or you can sample the local delicacy of cream tea.

The image shows an aerial view of a Devon landscape

On the west Devon is separated from Cornwall by the river Tamar, which flows southwards down from  its source on the rugged sandstone massif of Exmoor to meet the English Channel. On the east are Dorset and Somerset, but to the north and south there surges the sea. The sea created Devon's history. And America's, for it was from the Devon town of Plymouth that the Pilgrim Fathers set out to settle a new land. The seamen who forged Britain's fame as a naval power and defeated the Spanish Armada often were Devon men.

In ancient times the land was known as Dumnonia, a  Celtic term that probably meant the Land of the  Deep Valleys, a reference to  the rolling landscapes of the county.But rolling valleys are not only what Devon is about, for it is a county of wide vistas and expansive views. From the edge of the moorlands of Devon, should you take a view from them, you get a sense of a land that undulates in soft green waves over towards the stormy billowing of the encompassing seas.But though the land could be said to have  a feminine quality about it, it has produced many a tough seaman, for example Sir Francis Drake  and Sir Richard Grenville, the latter of whom died fighting fifty three Spanish galleons at once, having refused to surrender at the battle of Flores.

The county has given its name to the Devonian geological period, where it is represented by the Old Red Sandstone, which gives the land its reddish-tinged soil. The sandstone is present at surface level on the northern shore where it appears as Exmoor.  You can see below a picture of Woolacombe, on the northern coast below. Like Exmoor, it has a sandy not very  rich soil, making it a coastal moorland primarily suitable for sheep and the tourist industry, which makes good use of its excellent beach. But as you can see from the lovely arboretum in the picture, there are lusher areas of the county. Much of the county is rich cattle land and Devon's apple orchards and the cider brewed from them are renowned.

There is a string of coastal resorts on the south coast,many of which take advantage of the fossil-rich cliffs which as they crumble reveal masses of fossils from the Triassic, Jurassic and Cretaceous periods. Many of these were once fishing ports and it is still possible to hire a sea angling boat for a day of fishing, when you can catch pollack, whiting, mackerel and sometimes other fish.

I can recall an Easter break where we stayed in  a caravan above Woolacombe Bay, which lies  between headlands that jut into the Bristol Channel, a wide expanse of water between Devon to the south and South Wales, which is just too far to be visible in the sea haze. In the early evening I set off to stroll the mile or so to one of the headlands. As the sun sunk  towards the South West I was conscious of walking through a land on the edge, for this stretch is moorland, sheep country, tended by a determined shepherd. With the bulk of the tourists having retreated to the holiday camp, leaving the beach empty,  I was struck by the great background silence of nature, only punctuated by the occasional squawks of seabirds and the booming gusts of wind from the North West. I find it strange that I can remember a short walk so long ago, but perhaps I was conscious of being in a liminal space, the border between two worlds. It was a time for quiet reflection.

I think it worth adding that the beach has some wonderful rock pools, one large enough for a canoe to be paddled.That made the place memorable.

On another occasion we stayed in a lovely thatched house with a beautiful garden with chickens running free within its bounds. One incident that has stuck in my eldest son's memory is when we were sitting down at our meal when a tiny shrew raced in through the backdoor and out I know not how. This was the only time that I have seen a shrew. I can still remember the  lady who owned the property, a real gem of a person, someone who has  left a good impression on our memories.

But Devon has wild places. Dartmoor is one. This granite massif with its tors reaches about two thousand feet at its highest and is lonely and dangerous. In the Bronze Age it was an inhabited highland until climate change caused massive peat growth. The result has been the growth of bogs,  one of which near the centre is Cranmere Pool, into which the long distance walker John Hillaby once stumbled when disorientated in a mist. He kept his head and managed to extricate himself,  wiser and wetter than he was when he went in. A basic rule for Dartmoor is "Stick to the paths!" There are ancient mine shafts whose mouths are partly concealed that are dangerous for the unwary. Dartmoor is a wonderful place great for peaceful walking and enjoying the wild ponies and the small patches of ancient upland oak wood, such as Wistman's wood, but take it seriously.

Exmoor, is not as boggy as Dartmoor and it makes for good peaceful walking, but it is a place where mists can roll in from the sea, so enjoy with care. Exmoor is well-known for wild life, including wild ponies and red deer, along with a rich variety of bird life.

All English counties have their distinctive food traditions, and as Devon is a rural county given to  dairy farming and apple growing it is inevitable that these traditions are reflected in its cuisine, and ancient rivalries result in differences. One difference between Devon and neighbouring Cornwall manifests itself in the tourist trade and concerns  cream teas.The lush lands of Devon give milk,which the Devon creameries  turn into clotted cream. Then remember that we English love our tea.With a cup of tea often goes a cake [say I as I take a mouthful of our national beverage.] The difference concerns scones and cream. Cornish cream tea lays a layer of jam on the scone and places the cream on top; Devon cream tea lay down the cream first and then a blob of jam. There are people who  take the issue seriously and argue the respective merits of the two. I am not one of them, I just enjoy jam and cream!

Devon also has its own brewing tradition, and some farms have expansive apple orchards whose fruits are used to make scrumpy, a strong version of cider. There has been a growth in the market for traditional craft  brews in recent years,as drinkers become more discerning. In recent years climate change has extended northward the  latitudes in which grapes may profitably be grown and so in some parts of southern England,for example Devon, vineyards have been successfully planted.Here is a key distinction that you must grasp when buying wine. English wines are made from grapes grown in England and fermented here; British wines are made from imported juice. Of the two only English wines can have a vintage.

In recent years there has been a successful experiment in South Devon that began when a head gardener realized that  the climatic conditions on his estate were identical to those of the Indian tea region of Darjeeling. The estate was set on an estuary whose air ensured that  the land was frost free, essential for growing Camelia sinensis, the tea bush. The experimental plantation went ahead and now produces a small crop that sells to tea lovers.

There is a range of recipes from Devon, including one for chicken in a rich cider and cream sauce, which you can find in appfordevon,com/entries/cider-chicken  .This is a useful app that contains valuable information, including a range of Devonian recipes.

Devon is a wonderful place to visit. I commend it to you.

No particular jam, but as the area is known for apples, apple jam might be common, but strawberry and raspberry are popular.

frankbeswick, Thank you for the pictures, practicalities and product.
Is there a particular kind of jam that is served with cream or will any jam do?

The Summer weather is good, but there can be storms in other seasons. Devon is said to be a good place to live.

I would have guessed any western location to be subjected to Atlantic storms, but this appears to be a serene place. I am amazed by the variations of natural aspects of different parts of England. 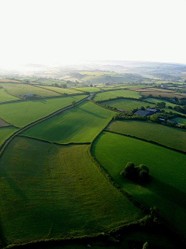