Archaeology can reveal something of the world in which Jesus grew up.

Religion is a complex field of study that draws on several disciplines. Archaeology is one such discipline, which draws upon sources of knowledge that have not been recorded by the writers of the documents used in history, or which have been lost, destroyed or discarded over many turbulent centuries. Recent archaeological excavations in the vicinity of Nazareth have thrown some light on the village in which Jesus was raised.

Photo courtesy of bluebudgie from Pixabay

One point that has been made clear by Dr Ken Dark's excavations in Nazareth and its environs is that the people there were not close to their neighbours, the people of the nearby town of Sepphoris. founded by Herod the Great in the first century BC. Sepphoris and Nazareth were at different poles on a spectrum of cultural  difference and could be said to have been in cultural conflict. Sepphoris, a town which no gospel records Jesus as having visited, was a site where Greek and Roman cultural influences moderated Jewish culture, so we say that it was somewhat Hellenised. This is not to say that the people were not Jews, but that Judaism was a broad church containing a spectrum of views  that spread from significant Hellenisation to the extreme traditionalism of the Qumran sect who produced the Dead Sea Scrolls. Nazareth seems to have been a home for a more traditional, conservative Judaism.

An indicator of this strong traditionalism comes from chemical analyses of the soils around the two towns.Fields in the vicinity of Sepphoris reveal chemical traces of having been fertilized by human ordure, whereas Nazareth's fields do not. This reflects a division in Judaism between the majority opinion, which regarded human manure as nasty, but not very bad and those sects which saw it as totally ritually polluting.It seems that the Nazarethites were at the strongly conservative part of the spectrum.

Other finds point in the same direction. Remains of broken vessels  of the period reveal a significant number of fragments of stone containers. The significance of this is that the more pious Jews believed that ritual impurity could not be caught from a stone vessel, so to preserve purity they used much stone. They did use ceramic, but chose, apparently intentionally, to avoid pots  made in Sepphoris, preferring rougher pottery made some miles away at a conservative Jewish site at Kafar Hananya, which would be accounted ritually clean. For these people style mattered less than religion.

Recent discoveries of the later first century AD include the tombs of several high ranking priests, dating from the period of the destruction of the temple by the Romans,when certain senior priests, who supported Rome,  were based there, as such a Conservative place was considered ritually clean enough for priests. The tombs contain glass shofarot, replicas of the goat horn trumpets used in the temple, whose use in the post-temple period was as a sign of mourning for the temple's loss.That a pro-roman group was based there probably ensured the village's survival in the Roman onslaught that followed the Jewish rebellion of 69-70.  Sepphoris also survived the revolt, as it co-operated with Rome.

The Village of Nazareth

That there seems to be a chemical difference in the soils between Nazareth and Sepphoris, roughly half way between the towns indicates that at the time when Sepphoris was operating there was a village at Nazareth whose territory Sepphoris had to respect.The village of Nazareth was once thought to have been quite tiny, having no more than 100 people, but modern discoveries reveal a town of about a thousand. Sepphoris, having been destroyed in the first century BC, was rebuilt in 4 BC. This recognition of Nazareth's boundaries shows that Nazareth was in existence when Sepphoris was rebuilt, a fact that rebuts certain specious claims that Nazareth was only built after the year AD 70.Such claims as these reflect the poor quality thinking that goes into much religious,or should I say quasi-religious discussion. Some of this stuff is merely anti- Christian polemic.

The village in which Jesus dwelt contained stone houses some of which had caves hewn into the hill on which the town was situated. Why these  caves were carved out remains unclear. Some have suggested that they were defence against Romans, but this seems unlikely, as such caves would be effectively a trap or a prison for those who went into them. It seems most likely to me that they were cool storage places for perishable goods or safe places to secure valuables. They might have therefore been cellars.

What of the people of Nazareth. They seem to have been predominantly traditional Jews of strict observance,but to which branch of Judaism they belonged we cannot say for sure. Judaism had a plethora of sects at the time, of which but a few survived the turmoil of the revolt of AD 70. It  seems unlikely that they were Sadducees, as they were mainly drawn from the high priestly class and were based near Jerusalem. Zealots, who practised anti-Roman terrorism do not seem to feature in descriptions of Nazareth and are  hardly mentioned in the gospels. I suspect that they had sympathies with either the Pharisees or the Essenes. Both of these groups were of strict observance, but only the Pharisees survived to become the basis of orthodox Judaism, while the Essenes simply disappear from history.  They were a group of the strictest religious observance possibly connected with the community who owned the Dead Sea Scrolls. My view is that Pharisaism was influential at Nazareth, but that the Essene movement may have had some followers there.

Interestingly, while Jesus often criticizes the Pharisees and Sadduces, he never has a critical word to say about the Essenes, or at least none is recorded. Why this is so we know not.

Nazareth is now a predominantly Arab town with a Palestinian population. It contains a basilica [large church] dedicated to the annunciation, the event in which Jesus was conceived by Mary when the angel Gabriel revealed God's will to her. It is an important Christian pilgrimage site.

Many Essenes were killed in the Jewish revolt of AD 70. They made a last stand at the fortress of Masada in 73 AD. The last surviving Essene males killed their womenfolk to protect them from the inevitable Roman atrocities and then killed themselves.

frankbeswick, Thank you for the plethora of practical information about Nazareth and Sepphoris.
What do you think happened to the Essenes and where did they go?

Interesting how small clues such as soil composition can reveal so much. 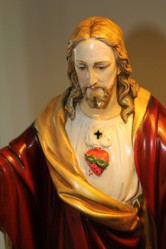