Marbles have been around a long time. Although people don't play with marbles like they used to, they're still sold today and older marbles are collectible.

Marbles for play are often mentioned in Roman literature, and marbles have been found among ancient Egyptian artifacts. Ancient marbles were originally made by hand, usually of clay or stone. Stone marbles were made by grinding and clay marbles were rolled into a ball and then dried, usually by firing in a kiln. Clay marbles could be left natural, painted, or glazed.

Marbles in later times were mostly made from clay, agate or glass, varying in size from about a half inch to one inch in diameter.

Marbles today are made in factories by dropping small globs of molten glass into a groove that rotates as the marble travels along. As the marbles are rotated, they are shaped into spheres. Color can be added to the various batches of marbles being created, or other techniques applied that gives marbles additional interest such as the "cat-eye" marble.

Marbles used to be quite popular in the 1950s and 1960s, and even a little later, but once kids were introduced to video games and other indoor activities, interest declined.

I Played With Marbles When I Was a Kid 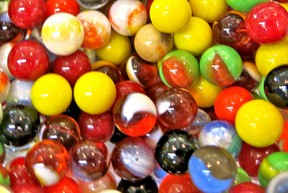 The only time we received marbles was at Christmas.  Our bags of marbles contained a large mixture of different types and sizes.  I liked to put my hand in the bag and feel their cool, round shapes.

Marbles were so fun to play with. We played with them in soft dirt in the bare patches in our yard.

Knuckle down means the players start the marble game with their knuckle against the ground.

Keepsies  means the winning player gets to keep all the marbles he wins.

Cat's Eyes - there was a colored piece of glass going right through the center that looked like a cat's eye.

Aggies - made of agate (aggie is short for agate) or marble glass that resembles agate.

Crystals or clearies  - a marble with no design, made with clear colored glass.

Steelies - made of steel (not just a ball-bearing).  A steely was made from a flat piece of steel folded over into a sphere and  you could see where the corners came together.

Swirlies - a marble made out of glass with one swirly color.

90% of the marbles made in the world are produced in Mexico. The world's largest manufacturer of playing marbles is Vacor de Mexico; making over 12 million marbles DAILY.

Have You Ever Played With Marbles?

Some Interesting Uses for Marbles 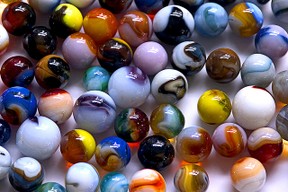 ~~ Put marbles in a birdbath to attract birds.

~~ Put a marble in your kettle of water and it'll rattle when the water is boiling.

~~ Put a couple of marbles in your pan when you make jam and they'll help prevent burning.

~~ Use marbles in your aquarium instead of gravel.

~~ Fill a large jar with marbles and use for a door stop or display on a shelf.

~~ Carry a marble with you if you're looking to buy a house.  Put a marble on the floor and it'll roll if the floor is not level.

~~ Fill a pan with warm water, Epsom salt or essential oils.  Add enough marbles to almost cover the bottom and roll your feet over the marbles.  Your feet will feel great!

~~ Place some small marbles in a bottle of wine that you opened but can't finish.  They will keep the air out and your wine will stay fresher longer.

~~ Slowly add marbles to a vase of freshly cut flowers to help hold them in place.

Many people who played with marbles as children collect them now as adults.

The value of vintage marbles depend on their condition, size, type, material, and scarcity.

What Games Did You Play as a Child?

I only played marbles a couple of times. When I was very little 6 or seven, I had a couple because I thought they were pretty.

I only ever had a few marbles growing up, just because I thought they were pretty. My big brother had a lot more. Loved your tips, especially the one about using a marble to see if a floor is level!

well Well WELL I have an extensive collection of marbles, all the way back to gorgeous glass German and clay marbles. I have a picture or two of them on my instagram page. I adore marbles you could say I'm addicted. I inherited a few collections from loved ones who passed and well that got me started. I love the beauty the art of them. I can gaze at them for days...simply get lost in them. Great article.

burntchestnut, Foot massages with marbles are super effective. I also appreciate the shimmer of marbles in a vase of flowers. Thank you for taking the time to spotlight marbles, which are -- or, at least, used to be -- an enchanting part of childhood memories.

My older brother did play marbles in the 50s and 60s. Haven't seen any in a long time. But I found this article interesting, especially what to do with them now. The foot massage sounds great.

I remember playing with marbles when I was a kid. Those days television had not flooded homes of middle class families and we had plenty of time to play with them. You brought those wonderful memories back.

Queenies were the marbles made of white glass with shades or flecks through. I bought one mesh of marbles a few years ago and a triangular dessert glass bowl, makes a wonderfully colorful table center in the conservatory, especially in the summer when the light catches the colors. I played marbles incessantly as a kid, also made a heap of LEGO designs. Both interests are still with me now and I do have to be restrained when I go to places which sell either of these items.

Confetti-filled eggs can be used at festivals, birthday parties, graduations,...

Wouldn't it be fun to learn to make fortune cookies and create your own personal greetings to put inside?
30%  1   6 AngelaJohnson
Other US Holidays 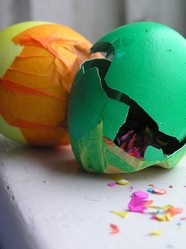