Bunnies are cute and adorable little animals. I always wondered how they got associated with Easter celebrations. Don't you love the bunnies?

Most of us love these little cute bunnies, whether they are real or toys. Kids adore them and they are inseparable from the Easter celebrations. When I was a child, I always wished I had a rabbit as my pet. I knew someone who had a few and whenever I saw them, I was excited. Do you know how they got linked with the Easter celebrations?

History Of The Easter Bunny

Easter Bunny is a fantasy character which seems to be originated in Germany. In German, Easter bunny is called Osterhase and the tradition dates back to 1700's. According to the tradition, on the day of Easter the Osterhase lays eggs and decorates them and hides the eggs in gardens for the kids to find out. It is believed that it is the German immigrants who came to America in the 1700's brought the concept of the Easter bunny in America. There are mentions about the Easter bunny character as early as 1500 and it is thought that they became popular in the 1700's.  In one of the notes about Easter bunnies which dates back to 1684, a professor in medicine mentioned about the side effects of overeating Easter eggs.

Rabbits and Hares were always associated with fertility and spring, and hence they became a symbol of birth and life as well. This is the reason why bunnies got linked with Easter where people celebrate the resurrection of Jesus Christ. The fictional character of Easter Bunny lays eggs and fill the Easter baskets for children, this is what the children are told. In reality, we know rabbits don't lay eggs. However, this belief is also linked with few legends from history which are related to the Anglo - Saxon goddess of spring whose name was Eostre ( or Ostara).

The below image from Wikimedia Commons Image is that of an Easter Bunny postcard from 1907.

A Legend Associated With Easter Bunnies

One such legend from history goes like this. Children used to follow Eostre, the  goddess of spring, everywhere she went as she loved children. And one day, to entertain the kids, she changed a bird into a rabbit using her power. The kids were delighted to see the magic, but the rabbit looked sad and fearful. Seeing the rabbit is unhappy, the kids requested the goddess to change it back to the bird. She tried, but she couldn't. However, she made a promise that she would convert the rabbit back to the bird every spring, when she has much power. So during the onset of every spring, the rabbit would change back to the bird and lay its eggs, and celebrate spring with the children who requested Eostre to reverse the spell.

The below picture is an image of Eostre ( Ostara) from Wikimedia Commons Image.

The artist is unknown.

There are many beautiful and funny stories associated with Easter Bunnies. Here you can see two such story books from Amazon.

Did you know about the history of Easter Bunnies?

Peacock Symbolism - Peacock Association With Easter
Peacocks might be the most beautiful birds on earth and they are also large flying birds, but did you know about peacock symbolism and the association of peacocks with Easter?
Updated: 01/13/2017, VioletteRose
Thank you! Would you like to post a comment now?
8

Loved reading about Easter bunny, I never tire of listening to the stories.

I didn't know the Easter bunny originated with the Germans. That's interesting.

VioletteRose, The Easter Bunny ring holder is sleek!
Bunnies are adorable, in person and in art.
Even though you didn't have your own bunny, it's great that you could enjoy them as pets via your acquaintance.

Nice stories, Violette! :) Thanks for sharing!

Easter is coming and there are many ways to celebrate Easter with your kids. ...

Each confection is worth 3 luscious taste bites. No matter where you live you... 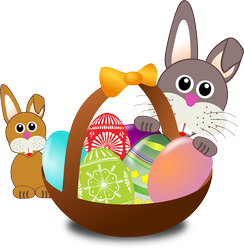 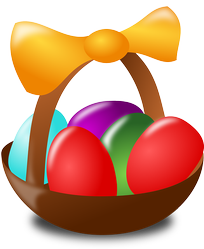 Easter is coming and there are many ways to celebrate Easter with your kids. Here are some beautiful colourful Easter gifts for children, with some ideas for Easter egg hunting.
51%  3   6 paperfacets
Easter Celebration 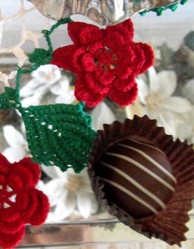 Each confection is worth 3 luscious taste bites. No matter where you live you can get See's Candies delivered to your door. Go to the official website for all the favorites.
Loading ...
Error!