Several measures are effective for the prevention of Ebola virus disease spread.

Epidemics of Ebola virus disease gain global attention as the infection is a deadly one. Many people will acquire it when they care for relatives at home who are sick and there is not yet a definitive diagnosis. Even if family members know the patient has this illness, some may not understand that protective gear is necessary to avoid its transmission [1, 2].

The use of personal protective equipment for Ebola virus disease is more complex than that which will protect against less serious medical conditions. In fact, the best approach is to place the patient in a health care facility where staff are knowledgeable about the use of the gear. Protective equipment to prevent acquisition of Ebola virus disease involves gloves, impermeable gown, boots, closed shoes with overshoes, and mask and eye protection [1, 2].

Health care workers are at risk for acquisition of Ebola virus disease, and they must have training to work with patients who have the infection.  Specifically, hospital staff must consider safe injection and phlebotomy practices, sharps management, decontamination of surfaces and equipment, and proper management of soiled linen and waste [1, 2].

Those who hunt and handle animals have to wear gloves as there are many diseases which they can acquire when they slaughter them.  Some researchers have suggested that human immunodeficiency virus infection began a century ago when hunters in Africa did not use protective equipment.  This hypothesis, though controversial, suggests that the virus responsible for acquired immunodeficiency syndrome “jumped” from non-human primates to humans in this fashion [1, 2].

Those who consume blood, milk, meat, or animal tissue on farms must cook these food products well in order to avoid acquisition of Ebola virus disease.  This is especially true on pig farms where fruit bats tend to be present. [1, 2].

Ebola virus disease is one of the most serious infections in humans which physicians have ever encountered, and preventive health behaviors are essential in order to control it.

3.  The photo indicates the early symptoms of Ebola virus disease and is reprinted with permission from the Centers for Disease Control. 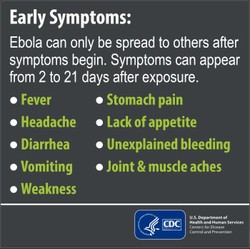 Nissan LEAF® has five-year leads as the top-selling electric car, partly due to maximum sound confidentiality inside and minimum noise pollution outside.
100%  10   25 DerdriuMarriner
Environmental Health