Encaustic Art ~ what is it?

An article to explain what this form of art is, to outline its history and the modern ways now used.

Many people have not heard of this art medium. Often, when telling people about it an Encaustic Artist will be told, "Oh you mean Batik!"

During this article I will take you through the History - the Old Way, a well known artist who lost a contract when he got the wrong end of the stick, how the New Way was developed and, finally have a look at the works of a modern Encaustic Artist and where you may buy examples of this fascinating art form.

Where did Encaustic Art originate?

The origins of Encaustic Art

This is Artemidorus Daldianus or Ephesius who was a professional diviner who lived in the 2nd century. He is known from an extant five-volume Greek work the Oneirocritica or Oneirokritikon, His portrait was on exhibit in the British Museum and has been painted using encaustic wax. For more of his story look HERE.

Of course Encaustic painting in those days, 2000 years ago,used techniques different from those used today.

Can you imagine painting on a wooden panel using beeswax coloured with earth pigments you have mixed yourself and applying it with a bronze tool heated over a charcoal brazier?  That is what the Ancient Greeks, Egyptians and Romans did.

Researchers believe that the wax, sometimes reinforced with shellac or other resins, was heated in a metal container over the fire and then applied using a spatula or brushes.  Certainly many examples exist in museums all over the world of burial or perhaps soul portraits that were commissioned over 2000 years ago.

Through the years waxes have remained popular for icon painting but other media, such as oils, came into fashion due to their ease of use and many of the techniques used in the past were lost.

In 1504 Leonardo da Vinci ~ according to the Codice Magliabechiano,  decided to paint using Encaustic Techniques.  He chose probably the most important commission he had ever received. This was on the wall of the Counsel Hall of the Palazzo Vecchio of Florence. The Battle of Cascina had already been planned by Michelangelo, who had just finished the statue of David. so he intended to paint the Battle of Anghiari on the opposite wall. The story, possibly apocryphal, goes that when almost finished the heat from the fires used to warm - dry? - the wax caused it to run.  In the event the painting was never finished. Even today it is called or referred to as "The Lost Leonardo". Peter Paul Rubens made a copy of the original in 1603 or we might never have seen what Leonardo painted. 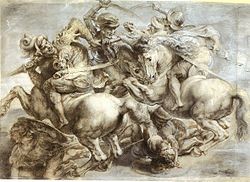 More may be read here on Wikipedia.

It is from Wiki that this photograph

of Ruben's painting is taken. The rebirth of Encaustic Art may be accredited to one man ~ Michael Bossom.

Michael is from Wales.  The long ranging hills of his homeland inspired the artist in him and in the early Nineties he started on his mission to modernise Encaustic Art.  Today, his mission accomplished, he is the foremost Encaustic Artist in the world.  He also supplies all the necessary equipment for the artist to develop his or her own ideas and techniques.

What then is the New or Modern Way?

Simple!  One uses a Travel Iron.

Whenever the audience at a presentation is told this, if they are not aware of the Art Form, there is a gasp of astonishment.

And then the second item in the Artists paint box is produced.  It is called a Stylus and resembles a thermostatically controlled soldering iron.  There the resemblances ends for instead of the normal soldering iron's tip the artist uses specially designed tips that retain wax.  In addition a brass brush and some other tips resembling miniature flat irons are also used with - or in - the Stylus.

Finally there is a hot air blower.

Last but not at all least is the wax itself.  It is made from pigmented beeswax and comes in a multitude of colours.

For more information please visit The Encaustic Art Shop.  Here you will see details of all the equipment and books on offer.

This is one of my favourites.

It was painted for me on my Silver Wedding Anniversary in silver pigmented wax.

You will realise at this point that the Artist whose work I am putting under the spotlight is related to me!

She is in fact my daughter and, like any parent I am extremely proud of her accomplishments; especially in the field of Encaustic Art.

When I review her journey as an artist I never cease to be amazed at what she has done.

* She is completely self-taught. When given an Encaustic Art set as a present by my brother way    back in 1997 she was the very first person to even hear about this art form in South Africa .  She set out to learn the techniques.

* Since then she has:

+ appeared at Church and School Fund Raising functions and at Art Association meetings.

+ made presentations and been appointed to an Art Commission at the University of Zululand - Umlazi Campus - to promote the reinstatement of Art and Culture programmes into the Education Curriculum for Schools in KwaZulu Natal that had been suspended during the Apartheid years.

+ visited Westville Prison - Young Offenders Wing - to assist in the rehabilitation of young men - assisting Social Welfare and a team of Writers and Artists.  This she did by teaching them how to paint using Encaustic Art.  The head of Social Welfare at the prison stated that she had changed the consciousness of many young men simply by believing in them and taking the time to get involved.

+ taught over 3000 school children and was in demand to visit schools as she showed that anyone can be an artist if they set their mind to it.

+ taught many adults including artists who were well established in their field.  One such man was the official portrait painter of M. Georges Pompidou of France.  One youngster who visited her stand at a Flea Market had 'lost' both his hands in an accident when a child.  Already a gifted portrait artist he amazed crowds of people by mastering the use of the hot iron and stylus using the stumps of his wrists!

+ made presentations at the HobbyEx exhibitions in Randburg, RSA,  and demonstrated to many thousands of people.

+ painted over 15000 original paintings - 5000 of which were presented to every delegate of the World Association of Flower Arrangers when their annual convention was held in Durban.

One of the things that I have never grown tired of is the way the jaws drop when she demonstrates her work to a crowded hall of people.  An A5 painting can take as little as 3 minutes from start to finish and when done she picks up the card she has painted and polishes it with some tissue.

Heat is the solvent and the wax cools rapidly.

At the University of Zululand there were well over 250 delegates including the Chancellor and several world renowned African artists.  Even though one of them had seen her work before he, too, was amazed for she completed an A5 painting of the rolling hills of KwaZulu Natal, fields of sugar cane, a cloudy blue sky with circling birds, a pan - or spring fed pool - with wild flowers and dragon flies ~ all in 2 minutes and 40 seconds.

Why not visit Jacquie's Web Site to see her work for yourselves?

What do YOU think of this form of Art? Have you ever heard of it?

Thanks. Welcome to Wizzley! I look forward to seeing your Articles.

Wow! Great art works! I heard a little bit about encaustic art before, but I didn't knew that its origins are going back to that age.

There you go CherylsArt ~ TYVM for the idea.

Sounds impressive. I would like to see more of her work on your page.

Pink color is especially popular among girls but this is true for less than h...

Candy Waters is a nonverbal autistic teen. Her parents discovered she has a p... 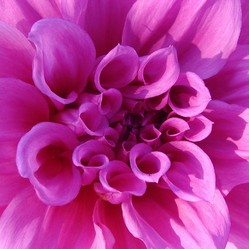 Pink color is especially popular among girls but this is true for less than hundred years. While it looks like a simple mixture, there are hundreds of known pink tones.
100%  11   9 melanie_a917
Other Painting Topics 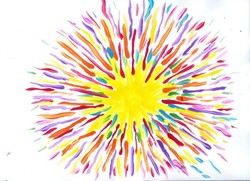 Candy Waters is a nonverbal autistic teen. Her parents discovered she has a passion for painting, and have encouraged her to use her art as an outlet for her emotions.
Loading ...
Error!