The author journeyed through England, climbing the height of Mount Everest in twelve days.

This is a walking book, not a book on mountaineering, for the ascents in it are low, generally gentle and doable in a few hours without any climbing. The charm of this book is that you walk with the author on his lonely journey, having read a few hints of his emotional pain,which forms a poignant background to the narrative. The chapters are short, intense and beautifully written. This is a well-written book by a skilled and experienced author.

Photo courtesy of lekies from pixabay

Peter Owen-Jones is a vicar, a minister in the Church of England, the Anglican Church, a well-known author and television personality who has appeared on some high quality religious programmes in the UK, programmes that have taken him into encounters with people of many faiths and none. In this book he comes over as a man deeply hurt, and as he states near the end of the book that he returns to the bed that she no longer shares, we infer that he is coping with a marriage breakdown not of his choosing. At the end there is a hint that she left him for another man.

Walking was his therapy. He chose a route through England, beginning in Cornwall in the south-west and terminating twelve days later on the English side of the Scottish border and Cumbria. The distance between the walks was covered  by car, which explains the short time required to journey this three hundred mile route.He travelled alone, in mourning maybe,staying at local inns and guest houses, always in bed by nine pm,for he had no social life to keep him up. Very sad!

This is not a book great on geographical facts. Rather it is rich in experiences, as the author observes people and land as he journeys. His work is reflective and well-written, and there is a touch of the poet in him.

But there is a touch of naivety at times. Writing of the  top of Ashes Hollow on the Long Mynd  in Shropshire, one of my favourite places,  he notes the absence of corvids [crows and rooks] and says that it is as if the hunters have not found this valley yet. Sorry to tell you, Peter, but when my son Matthew and I walked that path more years ago than I would like to admit we espied a circling buzzard and heard its potential grouse victims a-churring in concealment in the heather, while the whinchats fled to cover! The hunters miss nothing.

He begins his walk with a short, easy ascent of Brea Hill in Cornwall and a visit to St Enodoc's church. This is poignant, for it  was where as a teenager he had his first kiss, so it is as though he is beginning a reflective journey through his life. At the church he reflects on weddings that have taken place there. We can see why.

Quickly he moves out of Cornwall into Devon, where he does some walks on Bodmin Moor and Dartmoor. These are popular walking venues, but the weather was not always good. For many in Britain the south west is a popular summer holiday venue, so they imagine it a sunny place, but in other seasons the weather can be bad, with storms surging in from the Western Approaches on the Atlantic end of the English Channel. The walk here was at times demanding. He quickly wore out his old boots and developed sores due to damp feet, which required him to use medication.

Owen Jones proceeded to visit Glastonbury Tor and Cheddar Gorge, both popular tourist sites. Glastonbury is a unique town, with both Christian and Pagan significance, its pagan significance deriving from its role in Arthurian legend and the iconic tor which stands above the town, along with a sacred well. Jones felt a little unsettled among the new age shops that are found on the high street, but he did the relatively small tor with ease.

Ascending the path up the cliffs above Cheddar Gorge took him along a well-trodden route frequented by many tourists, but one incident had him rubbing his eyes questioning whether he was hallucinating. A horse burst out of the trees for a few moments, but its running made no sound and when he checked the soft ground he found no hoof prints.It was definitely real, he insists.

Onward from Cheddar he visited Crickley Hill in Gloucestershire, a well-known neolithic site with  an earthwork called a hill fort. The day was pleasant and sunny and there was a throng of visitors enjoying the prehistorical experience.But he misses a significant archaeological point, for Crickley Hill fort was the scene of Britain's first recorded massacre, when its inhabitants were slaughtered, the date being 3700 BC.There is a lacuna in his knowledge here, for this murderous onslaught merits reflection on human nature and an observation that we should not idealise any period in the past. I am thinking of Marika Gimbutas' dreamy idealisation of the neolithic as the civilisation of the goddess, where people dominated by a feminine deity lived peacefully. Crickley Hill gives the lie to this reverie.

He spent two days in the Shropshire Hills around the  Long Mynd, and Caer Caradoc walking two routes in all. Caer Caradoc is  dramatic looking, but small, and it is a place with a history, for it is said to be the site in whose hill fort Caradoc, known to the Romans as Caractacus,made his last stand against the Roman conquerors, though the conquering troops were Rome's Brigante allies led by queen Cartimandua. Caer Caradoc can be a challenging walk at places, but it is popular.Owen Jones is less concerned about the historical legacy of places than I am, but that is his personal preference.

But he loved the next walk around Pole Bank and the Long Mynd, which took him through the historical site of Carding Mill Valley, preserved by the National Trust, and over the top of Ashes Hollow on the ancient rocks of the Long Mynd. Ancient track ways cross this moorland, and it enjoys a deep silence punctuated only by birds and further down the valley the trilling of little cascades, each with its own pattern of sound, as I discovered when I took the trouble to listen to each one.I imagine that the peace of this ancient place helped his wounded soul to heal. I hope so.

He drove onward to misty Kinder Scout, just east of Manchester, the first of three walks in the Pennines, the chain that runs down the spine of northern England. This was the first time on the walk that he struggled with navigation, as this bleak moorland is hard to navigate when it is misty, as it often is.There is some humour in the chapter as he recounts the struggles of  walkers to find the right path. He also walked around the Haworth region, the bleak moorland home of the Bronte sisters, stopping to see the rectory [vicar's house] where they lived. Hebden Bridge to Stoodley Pike was the third of this trio, which was on  day ten, but he then drove over to Cumbria , where he did a walk to Cautley Spout, a scenic waterfall.

Day eleven was a peculiar route, beginning with a detour to the Scottish borders where he ascended the Cheviot Hills. I think that this muddy ascent was primarily to enable him to walk the length of England, but to fit his journey into its twelve days he was forced to do more in a day than he should have, for the next route took him up Dungeon Ghyll [Gully] back in Cumbria up to the narrowly ridged summit of Pavey Ark. Again Owen Jones' preference for living people over history makes him overlook the charming character of the Old Dungeon Ghyll Inn, an ancient hostelry on the old packhorse trail between England and Scotland.  Nearby is Oxendale, a tributary valley where the drovers used to pen in oxen as protection from cattle rustlers.

The journey concluded with the ascent of Scafell Pike, England's highest mountain. It constituted a happy and successful end to a journey born in sadness, and was a metaphor for the capacity of the human spirit to endure and transcend. There is a touch of humour at the end, where to make up the final twenty feet he scales a fir tree.

But then he return to an empty and lonely house and we know that a hurt assuaged by relaxation is not a hurt gone away. He still has his personal cross to carry. Our thoughts and prayers be with him.

Thanks, Dustytoes. I like to write about paths that I have personally experienced, or at least read about in a book that I can review.

BSG, I have walked in all the areas where Owen Jones journeyed, bar Cheviot, though I have not done the exact walks that he did.

You can see more in such a book than most, having yourself had personal experience walking England, and probably much of the paths traversed. So when you share the details, except for his personal sadness, it is with deeper understanding, and can be relayed to your readers better than a professional book reviewer. This is of great value to those of us not in England, but keenly interested in England as a place of heritage. Thanks.

Walking in a beautiful landscape is a great comfort. As I read your review of the book, I kept thinking that you could do a nice job of writing about the history of favorite trails and landmarks.

Ashes Hollow is a narrow v shaped valley whose vegetation is mainly heather,gorse and coarse grasses. There are birds there, but mainly moorland birds. Only the grouse are hunted and then only in season. Most birds in Britain are protected from hunting, so their numbers have not been depleted by hunters.

frank beswick, Thank you for the back- and front-stories and product lines. Did the author assume that Ashes Hollow has no bird species that draw hunters, and is the valley actually depleted because of thorough hunting way before his climb?
In another, but somewhat related direction, is there a route that is considered a "must-do" trek because of its cultural and historical significance to England? It would be the Appalachian Trail predominantly, and sometimes the Trail of Tears or the Underground Railroad, here on this side of the pond. 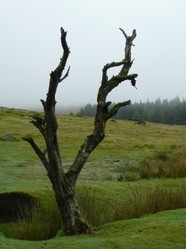 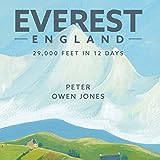