Henry Howard was executed on January 19, 1547. He was Henry VIII's last execution.

Henry VIII executed thousands of men and women during his 33 year reign. Some sources say as many as 37,000! His last victim was executed on January 19, 1547 and was none other than the son of Thomas Howard, 3rd Duke of Norfolk, uncle to Anne Boleyn and Katherine Howard. Henry Howard was convicted of treason just six days earlier.

The Early Life of Henry Howard

Henry Howard had a promising life as the son of the Duke of Norfolk.

Henry was raised with Henry VIII’s illegitimate son, Henry FitzRoy. They were very close friends until FitzRoy’s death in 1536. He was a very able soldier and very much like his father in terms of wanting power. It was that want for power, and the arrogance that came with being a member of the House of Howard, that led to his downfall.

As the eldest son of Thomas Howard and Elizabeth Stafford, Henry had a direct claim to the throne. He was descended from two kings, Edward I and Edward III. This could have been a danger for Henry VIII, but that was not the reason for his execution. Henry VIII was worried about his son losing the throne instead. He was convinced Henry Howard wanted to become king after his death and made sure it could happen.

The Successful but Rash Soldier

Henry Howard was known for his poor decisions during his life.

Like his father, Henry was a very capable soldier and started with a successful career. However, he was known for making rash decisions, which led to stints in prison. Some of the bad decisions included striking a fellow courtier and breaking windows during the night. Arguably, the only reason he became the Earl of Surrey was because of the death of his grandfather and the title of Duke of Norfolk passed to his father.

He was known for more than his fighting capabilities, though. He was a successful poet and worked with Thomas Wyatt on various occasions. One of his biggest accomplishments was a sonnet that Shakespeare later used. He was known as one of the Fathers of English Sonnets with Wyatt.

The Imprisonment of Henry Howard

Henry VIII feared that Henry Howard was going to take the throne after his death.

In the last month of Henry VIII’s life, Henry Howard was arrested along with his father. The King believed that Henry was trying to usurp the throne from Prince Edward. One of the alleged offences was that he displayed his heraldry at Kenninghall on October 7, 1546. However, during his arrest this was not mentioned. Some of the offenses were plans for fleeing the realm and slandering the royal council. It was also suggested that he try to make his sister the royal mistress.

He attempted to defend himself during his trial. However, like all traitors he was not allowed to know the evidence against him and he did not have someone represent him. He would have had to think about his answers on the spot.

He was found guilty on January 13, 1547 and executed six days later. His father was also arrested and convicted of treason. However, Thomas Howard was left imprisoned until Mary I’s ascension to the throne because Henry VIII died before his execution could be carried out. Upon Henry Howard’s death, his son became the Duke of Norfolk. Henry VIII’s death on January 28 made Henry Howard his last victim.

Henry Howard was buried at All-Hallows-by-the-Tower until 1614. Henry’s son, Henry, Earl of Northampton, moved the body to an elaborate tomb at St. Michael’s Church, which was the family’s tomb.

It all stems from The Tudor fears and awareness of their very weak claims to the throne. Henry felt that it would take a strong male to keep their dynasty going. Their dynasty was indeed short lived, only 118 years. The previous dynasty, The Plantagenets ruled over 300 years. In fact the strongest Tudor Monarch was female. The formidable Elizabeth 1st. if indeed she was a female at all. But therein lies another tale. ...;)

I often question how happy he was in his life. From research, I get that he was very insecure about his claim to the throne and felt threatened by the various Yorkist claims (like poor old Margaret Pole who probably wouldn't have bothered considering she was 67 at the time of her execution). I often wonder whether his lack of physical activity after that jousting accident he had sometime in the 1530s was partially the cause of it all. It's no excuse, but I'm sure going from being extremely active to hardly being able to do anything would have affected his mental state. Nowadays something could be done about that, but so little was understood back then.

I'm definitely not excusing him, just speculating to try and understand him more.

But, even from a purely secular perspective, doing evil will eventually come back to haunt you in the end. Most despots die in misery. 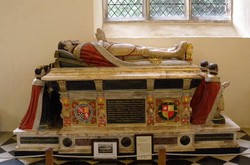