Flora of the Tides: edible seaweeds

Humans have been using seaweed for thousands of years as a contribution to their diet.

Those of us who are inland, urban dwellers encounter seaweeds only when we take occasional trips to the shore, but these wonderful, nonflowering plants have much to offer. Seaweeds have been a part of the diet of some coastal dwellers for many years, especially for people in Japan and parts of Asia, where seaweed is eaten as a matter of course, especially in Nori, a seaweed dish. But sea weed is not only eaten, it is an ingredient of other edible substances.

For millenia the inhabitants of seashores have turned to algae, seaweed, as a source of food and fertilizer. The Scots and Irish used them as a key ingredient of lazybeds, the raised beds in which they grew their staple crops. The Welsh use algae in laverbread, a seaweed recipe that takes a long time a-boiling.The Irish and Scots used to harvest kelp to feed the needs of industry, and the sea weed trade has resumed on Rathlin Island of Northern Ireland, where kelp is grown,  harvested, cooked  and sold for snacks by an enterprising company that is making a great contribution to the economy of the island. This industry is also practised in Kerry, South West  Ireland. In Japan the Japanese have long harvested seaweed and have developed their industry so such a degree that there are seaweed farms on the seabed abutting  some of the more southerly islands in the Japanese archipelago.  The agar derived from seaweed is sometimes used as a thickening agent in ice-cream, and in fact agar is the Japanese word for red seaweed, signalling that its thickening powers were discovered by Japanese people.

You can eat most multi-cellular marine algae as long as you find them  still attached to the rock and in clean water. There are certain algae that are toxic, but these are the monocellular algae found in algal blooms that sometimes proliferate in sea water in summer time. Freshwater algae are sometimes toxic.However, algae detached from rocks and free floating may have gone off and also those in polluted waters are unsafe to eat. Algae have the ability to concentrate heavy metals, which are toxic to humans, so beware of algae found near old mines or industrial workings. Desmarestia is said to be toxic, but it is a deeper water genus, so you  are unlikely to encounter it.  You also need to take care of your safety when on the shore, for in certain conditions you can be in great danger. One of the greatest dangers, especially in Winter on exposed shores is freak waves. Take the example of what happened to John Merrill, the first person to walk round the coast of Britain. He was strolling along an exposed beach in the far North West of Scotland  only yards from the sea, which was quiet, then suddenly he was up to his waist in seawater as a freak wave engulfed him. At six foot three he had the physique to cope and survive,  but a smaller person would have struggled.The  shore is a dangerous place, have full care for its perils.

Anyone who  has been to the shore will be familiar with kelp, whose long fronds are often washed ashore. But there are two  major species of kelp: Laminaria digitissima and Saccharina latissima, the latter being known as sugar kelp on account of its being slightly sweeter than the other variety,but both grow from the kelp forests that fringe our ocean shores. One way of using them is in the Japanese  stock,dashi, in which tuna, fermented, smoked,dried and flaked tuna are boiled with kelp, and the solid contents discarded before the stock is made use of in miso soup.Kelp can also be a flavour enhancer in soups and stews, but normally a strand is boiled in the broth but is taken out before consumption. Its flavour enhancing qualities are due to its having a good measure of glutamic acid in its cells. But kelp can also be dried and flaked into sea weed crisps.

This takes us to sea lettuce, Ulva intestinalis, sometimes known as gutweed, which is found in rock pools and mudflats on the shore. Sea lettuce when picked tastes of salt, but it can have its  flavour enhanced by being dried at fifty degrees in an oven for a few minutes and then either broken down into crisps or pounded into a powder which is used as a salty condiment on foods, a substitute for salt.It can also be lightly fried into crisps for a few minutes. This seems to enhance its flavour. Sea lettuce can also be used in salads, but to do this dry it slowly but not to crispness and apply a dressing of cider apple vinegar and walnut oil.It has a related species Ulva lactuca, which is somewhat more chewy.

Sea lettuce can be used as a substitute for nori, a Japanese seaweed dish usually composed of the seaweed pyropia, which is dried, shredded and then pressed into thin sheets for wrapping sushi.

Dulce makes a tasty, snack, chewy and salty, and it is  well-known delicacy in Ireland, where it is known as dillisk, a word that means water leaf in the Irish tongue.There are two main kinds,dulce and pepper dulce.The advantage of dulce, which is a red seaweed,is that it can be simply cooked, and the same goes for pepper dulce as well.John Wright, whose book,Edible Seashore, part  of the esteemed River Cottage series, is mentioned below. But mostly it is dried and used as a snack.

Carragheen, Chondrus crispus,  is a red seaweed easily collected in rock pools.It is not normally eaten alone, but it can be used by vegans as a source of non-animal thickening agent. If not going to be used immediately it can be dried, but if you dry it in your oven it will leave a lasting odour in your house,so dry it on sheets outdoors. Dried caragheen can be reconstituted by adding a little water and leaving it for a few minutes. A way of using carragheen,sometimes known as Irish moss or Carageeen moss, is to thicken stews. The way to do this is to hang it in a net bag in the stew for five minutes. It can also be dried and pressed into sheets of nori.

The final seaweed is laver, Porphyra ssp, yet another red seeweed [there are five species of laver that is a popular delicacy in Wales, where it is boiled down into the delicacy laverbread. This process takes between five and ten hours, to produce a black but savoury colloid that is used in a range of dishes. One good use is to mix laver with oatmeal flour and form it into cakes,which are then fried in bacon fat and served with cockles. It is said to make a tasty breakfast dish.

A range of recipes for these useful food stuffs can be found in Edible Seashore by John Wright.

I don't know salt from sea lettuce. We use sea salt. Halen Mon [Anglesey sea salt] is my preferred type.

frankbeswick, Thank you for all the fine practicalities and products.
What with seaweed desserts as a possibility, I'm looking forward to coming up with an all-seaweed, multi-course meal.
Do you prefer sea salt from seawater or sea salt from sea lettuce?

Probably, but they specialize in hamburgers. People just would not give it a chance.

I wonder if they would do better in vegetarian and vegan restaurants.

Some years ago a fast food restaurant tried seaweed burgers. I liked them, but they did not last long. And it was a large restaurant chain. I suppose people did not give them a chance, but the taste was not bad. 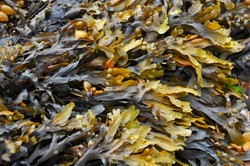 Sweet gum trees are a wonderful shade tree that grows quite tall, but their spiky seed balls are a nuisance, often causing you to slip or twist your ankle.
57%  8   5 frankbeswick
Green Living Tips