George Boleyn has had an unfair portrayal in most of fiction and was convicted of incest with his sister, Anne Boleyn, and executed on May 17, 1536. Was he really guilty?

TV shows, such as "The Tudors", and books and movies, such as "The Other Boleyn Girl" have often shown George Boleyn to be a womanizer or bisexual man. Some show that he was close to Anne as a brother would be to his sister, and others have shown him to consider committing incest with Anne as a way to secure Henry VIII an heir to the throne. These shows have always been certain of one thing, George rose to power just as quickly as he fell from it.

The Scaffold Point on Tower Hill

The Early Life of George Boleyn

It is unknown whether George was younger or older than Anne, however most historians agree that he was a few years younger than her; born around 1504. He was the only surviving son to his parents, Thomas Boleyn and Elizabeth Howard.

George was probably tutored at Oxford University, while his sisters were educated together at home, and he became a royal page. He married Jane Parker in 1525 and by 1529 had risen to be a member of Henry's privy chamber. If his birth date is accurate, 25 was a young age for George to have risen to that position. However, that would also show just how influential his family was becoming at that time; Henry was in love with Anne by this time.

George became Lord Rochford and was often sent to France on Henry's business. George and Henry were found to enjoy each other's company when it came to games such as dice, cards and bowls.

George's marriage has been depicted as an unhappy one however it is unknown just how true that is. Unfortunately, the different books, shows and movies that are about Henry VIII and his six wives, always show differing views and are never kind to George. Some show him as a womanizer, who slept with many other women while married to Jane. Others show that George was a homosexual, who had a relationship with Mark Smeaton; incidently, Mark Smeaton was also accused of adultery with Anne and was executed on the same day as George.

George and Jane's marriage was childless, however during Elizabeth I's reign, the Dean of Lichfield at the time was named George Boleyn and he described himself as the kinsman of her cousin, Henry Carey, Mary Boleyn's Grandson. It is believed that this was an illegitimate son of George's. This supports that George had affairs, however there is no proof that George was a homosexual.

Historians believe that Jane testified against her husband and Anne, which supports the possibility that George's marriage to Jane was unhappy. This could have been out of spite but it would not have made sense at the time. As a women in 16th century England, Jane would have been completely reliant on her husband financially. Women did not have jobs; their roles were to cook and clean. It is possible that Jane never realised the wrong that she had done due to thick and fast questions from her examiner - Thomas Cromwell.

On the 29th April 1536, George was supposed to be made the Knight of the Garter, however this was given to Sir Nicholas Carey; a supporter of Jane Seymour. This was the first sign that Henry VIII had started to change alliance between the two factions in court.

George was arrested in a very discrete manner on the 2nd May 1536 on suspicion of treason. He would not have known the reasons for his arrest at the time until his court date. Rules at the time stated that those accused of treason had no right to a defense and did not know the evidence against them. Evidence from Jane, confessing that George and Anne had spent "a long time together", sealed his fate.

However, the question is what lead to George's arrest? Historians believe that Thomas Cromwell had something to do with this. As the Boleyn faction grew, Cromwell had been plotting to remove them from court. At the same time, Henry VIII had grown tired of Anne Boleyn's attitude and inability to give him the heir that he needed. She had had at least two miscarriages by this time and only provided one living child - Elizabeth. He didn't want the same problem he had with Catharine years earlier, so the best way was to remove her and her supporters forever.

When Anne was arrested, shortly after George, she asked where her 'sweet brother' was. Anne should have known that her brother was being held in the Tower of London, although the reasons would not have been made known. This suggests that the accusation of incest was thrown together whilst George was being held in the tower.

To play Devil's Advocate, it could be suggested, as "The Other Boleyn Girl" shows, that George and Anne did contemplate incest as a way for Anne to fall pregnant after another miscarriage. However, both Boleyns had worked very hard to get to where they were and would not have done anything to jeopardize that. It is known that Anne and George had a close sibling relationship so the 'long time' that Jane referred too was most probably confiding in each other about problems they were facing; Anne's marriage to the king falling apart and George's possible unhappy marriage to Jane.

George was tried by a jury of his peers on the 15th May 1536; however, the outcome was predictable since before him, on the same day, Anne had already been found guilty of incest. George would never have known the evidence against him until it was made clear in court. This meant George had no time to put a defense together. He could not have thought back to the events to determine if they were even possible. Evidently, much of Cromwell's evidence due to locations of the people involved.

After being found guilty, George then confessed that he deserved death and no longer maintained his innocence. However, this does not meant that he was guilty of the crimes he was found guilty of. In Tudor England, prisoners convicted of a crime would see this as a punishment by God for their sinly life but may have been innocent of the crime that they were convicted of.

George was executed on 17th May 1536 along with Mark Smeaton and the four other men convicted of treason on grounds of having an affair with Anne Boleyn. Whether George was guilty of the crimes he was convicted of will always remain a myster;, however evidence does point to his innocence and that it was a way for Henry VIII and Thomas Cromwell to rid the court (and England) of the Boleyn faction to open a spot for Jane Seymour and her supporters to grow.

I'm looking forward to reading that!

Well, he was until he was executed himself in 1540. I'll cover him in more detail very soon.

I'd lay this all at the feet of Thomas Cromwell. He was very, very good at his job.

Thanks, Abby. I'm a huge monarchy fan but this period and the Stuarts are definitely my favourites. I have so many of the books surrounding them it's unreal. I don't think I'll ever get through them all since I buy new ones with unread ones still on the shelves.

Great article. This period of English history fascinates me. I love the book by Allison Weird by the way! 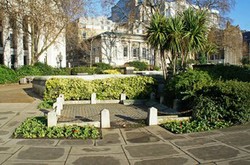