Glencoe: the glen of treachery

A place can be wild and beautiful, but still have a grim and brutal history.

Glencoe is three hundred and fifty miles from my home in the North-West of England, and the journey there takes you past lovely Loch Lomond, Scotland's largest lake, through winding mountain scenery, across the stark and lonely glacial plain of Rannoch Moor, and finally to Glencoe, a steeply sloping valley leading down to a sea loch. It is a wonderful place to visit, and I have been several times, but it was the site of a grim massacre that still gives the glen a sombre feel.

Image by alan_s, of Pixabay

The Route to the Glen

Crossing Rannoch Moor is hard by day, and I once did it by night, or rather in the early hours of the morning as we returned from holiday in Scotland. Forty miles of winding and irregularly undulating road passing across a stark, barely inhabitable landscape, with no farms to humanise it, and only the occasional hotel to provide refuge made for careful driving. The moor is a wilderness of bog, heather and lochans of various sizes. Lochans are small lochs, and in  this glacially carved wilderness they are formed in hollows gouged out by the long-departed glaciers. But the road has its hollows, as it undulates up and down and twists, for in the early hours of the morning they fill with swirling mists. It is the sort of place where you are half expecting to see a kilted figure appear from nowhere. But it never does.

If you are driving across the moor towards Glencoe you eventually see the mountain in the picture below looming up at the landward gateway to the glen. This is Buchaille Etive More. Buchaille [pronounced buckle] means shepherd or boy, in this case shepherd] Etive means guardian and more means big, hence the big guardian shepherd. It is from the summit of this stark pyramid that the watchmen set by the McDonalds of Glencoe used to keep alert for enemies crossing Rannoch Moor, though few braved it. Nowadays it is popular with mountaineers, and it makes for good winter mountaineering.

As you reach the end of Rannoch Moor and approach the entrance to the glen you come to the famous Clachaig Hotel, a hostelry on the edge of a wilderness. It sits at the foot of a mountain with one of the longest gullies that I have ever seen, it must be well over a thousand feet. Even by the long standards of Scottish gullies, this is a big one.

The Clachaig is notable for a sign pinned  to the bar, "No hawkers, no Campbells" though the latter ban is not enforced. This is in reference to the historical myth that the Clan Campbell was responsible for massacre of the McDonalds in 1692.The truth is that while the commander of the soldiers responsible for treacherously murdering their hosts was a Campbell, the unit responsible was composed of a variety of men and acted on the orders of the government.

We have had good times in the Clachaig, sitting in the bar with a wood-burning stove ablaze and radiating warmth, ideal for chilly conditions. I remember when we were staying at Red Squirrel campsite, a lovely little place halfway down the glen, we went for a meal,Maureen had scampi, which she loves, but I had haggis,one of my favourite dishes. I spoke to two Canadians sitting next to us who were delighted to finally have learned what haggis was. But my eight year old daughter spotted the inn's landlord, resplendent in Royal Stewart tartan, which every subject of the crown is entitled to wear, and innocently asked loudly, " What's that man doing wearing a skirt?" He looked askance at her, as we quickly explained that he was wearing a kilt.

The View From Rannoch Moor

Moving down from the Clachaig you come to Signal Rock, a tall rock protruding upwards in the glen [valley]. It is said that from here in the dreadful cold of a highland February night a piper gave the signal for the troops billeted with the McDonalds to turn on their hosts and murder them. The chief, McIan, was shot dead in his bed, while his ageing wife was stripped naked and turned outdoors in a snowstorm. Her sons, alerted by the shots, had escaped and managed to find their mother, but the freezing cold and the shock were too much for her elderly body and she perished soon after rescue. But most troops disobeyed orders and gave their hosts opportunity to escape, though more McDonalds perished of cold than gunfire.

We stayed at Red Squirrel Camp site, about half way down the glen. It is a a piece of open ground adjoining a conifer woodland, a dense softwood plantation. Like all such woodlands it is hard of access, but the site is not vitiated by it.There is plenty of space on good, level ground with soft, springy turf.

As you descend the glen you pass some mountains on your left. These include some good rock climbing grounds.Interesting, but I gave up rock climbing when we had children, just after a climber more talented than I, whom I knew, was killed in a freak accident.  Time to think of the children! However, these peaks make for great mountain walks.There is the challenging ridge of Aonach Eagach [Aonach means ridge] which is one of the narrowest ridges in Britain, and one that should not be lightly attempted.It is connected to a peak Sgorr nam Fiannaidh [the Rocky Peak of Fion's warriors, named after Ireland's famous warrior Fionn McCool.] Another pair of summits near the glen are Am Bodach [the Old Man] and A'Chailleach [pronounced calliach, The Old Woman]

The Three Sisters of Glencoe are ridges which are part of the Bidean nam Bian massif [Peak of the Mountains, pronounced Bijan nam Been. ] The ridges are Beinn Fhada, pronounced Ben Fotha, Long Ridge] Aonach Gearr [Short Ridge] and Aonach Dhu [pronounced doo, Dark Ridge.]They are linked  to a peak called Stob Coire nan Lochan, [The Peak of the Corry of the Small Lake.] Together they make one of Scotland's greatest walks, one with a magnificent view. But it is serious walking and better suited for the long northern summer days, as in darker seasons being benighted is not uncommon.

Glencoe village is at the foot of the valley, and here you will find an interesting folk museum. Maureen,the children and I enjoyed our visit. The museum is based in a traditional Scottish cottage, and it is a good example of a small,highly specialised museum that focuses on a specific area. There is a display of weaponry, which does not appeal to me, but it is well-balanced by farming and domestic artefacts.

On nearby Loch Leven there is the McDonalds' burial isle, where the murdered chief's sons interred his body after they had recovered it. You might be able to visit, but although the isle is near the shore you would need a boat.

There is a lovely craft shop at nearby Ballachulish, where you can purchase a rich variety of locally made Scottish delicacies.It is one of those places where you are tempted to purchase everything. I contented myself with a bottle of raspberry wine and a haggis, and Maureen, as is her wont, could not resist buying some cakes for the family's dessert.

Glencoe, despite its tragic history,  is a wonderful place to visit and when tourism resumes after the pandemic, it is well worth a visit.

frankbeswick, Thank you for the practical information, pretty picture and product line: the blanket, the pillow and the poster make a spectacular set.
A quick internet search gives me bracken as an English equivalent of Rannoch. Is the moor known for any particular vegetation?

Glad that you enjoyed it. There is another Scottish article coming soon, either today or tomorrow.

Yes, indeed Glencoe is a special place. I remember it from my childhood. I have happier memories of Rannoch Moor, though. My sister stayed there for a week last summer and had a wonderful time. Thanks for the reminder!

Some young girls survived the massacre because when the troops arrived the prudent McIan sent them away uphill to shielings, summer dwellings used in transhumance farming. Cold,but safe.

The mountain is too rocky for plant life.The land below the mountain,Rannoch Moor, is too poor to allow for many trees, but technically the tree line is about one third of the way up the mountain.

The roads are in good shape,and the Rannoch Moor road is nineteenth century, as is the Glencoe road.

You are right about the drainage.

One image is of a bald mountain. Does it rise above the tree line, or is the mountain too rocky for plant life?
Are the roads in good repair, or are they paths from antiquity in original shape?
I suppose the boggy area is because of drainage from the higher terrain. . 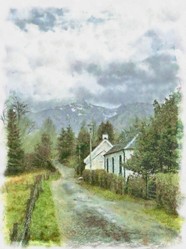