Have some fun with Ralpapajan

This is just a short story to brighten the day. It describes a simple error with a Stall Holder at a Market.

I decided that people deserve a laugh at least once a day so decided to take a simple error on the part of a Market Stall Holder and turn it into a short story.

A visit to a French Market

The French Market at Newbury.

I just got back from the Newbury Market, extended today by the addition of a French Market. I had a strange experience. You see, when I visit markets such as this I always do a quick recce to see what there is to see. This was no different but just as I reached the end of the Stalls I came across this incredible looking young woman of about 30. She was a dark haired beauty with the most fantastic complexion, languorous, chocolate brown eyes, a superb slim figure and long legs. She was dressed in a peacock blue silk blouse decorated with sea-shells and was wearing burgundy keans under a striped blue and white apron. she was wearing little silver earrings shaped like sea horses, with sapphires in them. She was just the type of French woman I really admire (It turned out she was Turkish but still a Delight.)

I went to her stall, she was selling some sort of food stuff and there were small pieces in saucers to taste. The whole scene was spoilt by a customer who decided to force me to buy, so I went on, bereft of her youthful beauty.

A few minutes later on I returned to once more gaze upon her youth and vitality (OK I admit it to perve) There was no-one else there so we gazed deeply into each other's eyes. My heart did a back somersault and pumped Devonshire Clotted Cream. I could see that hers was pumping Pina Colada.

I could hardly say that in fact it was not to buy but to gaze on her beauty so nodded dumbly. "What are you selling?" I asked to extend the moment.

She rattled off a dozen foreign sounding names but I didn't hear them. I could see the flush of mounting excitement creeping down her cheeks and neck.

"I'll have one of those, those and those," I said, pointing randomly.

"A fine choice," she said, making to sound as though I was wise beyond my years. (Phew)

The price was £5.65 so I gave her a £5 note and held out my hand with a collection of coins in the palm. I always do this with young women because then they have touch my hand as they scrabble for the right change. As she took a £1 coin a surge or chi energy connected us and I could see that she was discombobulated, as much by my stunning good looks and my tapered figure (OK I know it tapers the wrong way with the wide bit at the bottom, but it does taper) as by the electrical shock.

She was so shook up that she gave me my £5 back plus the 35p change. I protested but she was insistent that I had given her a tenner. Eventually I had to force her to take it. I knew it was a fiver for that was all I had. Then I went to catch my bus back to Basingstoke amongst a cloud of self appreciation and the thought that I had made someone's day.

You may now enjoy some of my Books on Amazon's Kindle

I hope you enjoy them.

Well I hope you enjoyed reading this short anecdote as much as I did writing it. Let me know here.

Thanks I do try to make people - laugh - cry - feel proud and so.
What I bought? I don't know ~ a spicy kebab - some sort of Lentil in Hommus - a sort of savoury thing that looked like a potato pattie.

Thanks for the delightful smile, its always a good day when you make that of anothers brighter, I'm sure she appreciated the sale, but what exactly was it you bought?

This also points out that we do not have to lose our sense of humor as we get older. Actually, we may find humor in a lot of different things.

Thanks Lynn. Love you too!

I loved this Rob. Thank you for sharing.

The only parts of this anecdote that are true are :
1. It was in Newbury.
2 It was a visiting French Market and
3. The girl did make a mistake and gave me too much change. 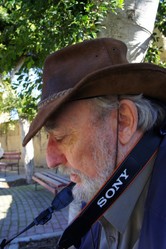