How Long is the Nile River?

The Nile River runs northwards from the tropical mountains and forests of the Equator to the temperate Mediterranean Sea.

The Nile River has influenced the ancient and modern cultural and geographic history of many peoples who stem from the Nile River basin, as well as being part of the religious heritage of all Judeo-Christian religions.

The power of the giant river is both productive and destructive, bringing both life and death to cities, villages, and communities up and down the banks of the Nile.

The Nile River is considered by geographers to be the longest river in the world. It stretches through nine countries of Sudan, Burundi, Rwanda, DR Congo, Tanzania, Kenya, Ethiopia, Uganda and Egypt, running northward to its end where it becomes a large delta that flows into the Mediterranean Sea. The Nile is 4,130 miles long (6650 kilometers), and in its northern portion is the sustaining water that brings life into the dessert country of Egypt. Almost all of the population of Egypt lives along the banks of the Nile.

Pathway of the Nile River

Egypt is Sustained by the "Gift of the Nile"

Ancient Greek historian Herodotus called Egypt the "gift of the Nile" due to the great influence that the Nile River has had and continues to have on the Eygyptian development and economy.  Egyptian commerce and culture has been based on what the Nile has brought to the region.  Egypt is in the middle of the desert, and the Nile brings more that just the life giving water necessary.

The silt deposits along the banks of the Nile have created fertile soil for growing plants, especially wheat which has been a valuable crop during famine.  The Nile River also allowed trade to develop in Egypt, because it is large enough to allow ships to traverse from one area to another carrying precious goods and cargo.

In ancient times, much of Egyptian spiritual life stemmed from the Nile. The Nile was considered to be a pathway from life to death and the afterlife. The east was a place of birth and growth, and the west was the place of death, as the god Ra, the Sun, underwent birth, death, and resurrection each day while crossing the sky. Therefore, ancient Egyptians placed their tombs west of the Nile.

The Nile River in Modern Day

The Nile River is still one of the most influential geographical features in Northern Africa, causing both political strife between neighboring countries over its control, and peace as they work out cooperative ventures.

The Nile is used for trade to this day, as it is the easiest way to traverse the path from the top to the bottom of the river.  The Nile River still supports much of the population along the banks of the river, in the Sahara Desert, bringing much needed water, fertile soil, and fish to the people who live their and their livestock.  Without the Nile, most of the civilization in that area of the world would just literally dry up and go away.

More Facts About the Nile River

The Nile River - History and Facts
How long is the Nile River? It is Africa's longest river, reaching 4150 miles from the lakes that feed it and the streams that feed those lakes. Of Egypt, the land with which it is most closely asso­ciated and which the Nile makes fruitful for the last thousand miles of its course, the ancient Greek historian Herodotus wrote that it is an acquired country, 'the gift of the river'.

I did not know that the Nile was the longest river, through nine countries. I only knew Egypt

The Great Pyramid of Giza is truly worthy of being one of the Seven Wonders o...

Egypt - A Journey to the Past

Take a journey back in time on a cruise of Egypt’s Nile River. 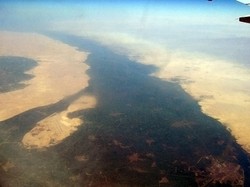 The Great Pyramid of Giza is truly worthy of being one of the Seven Wonders of the Ancient World, and all the pyramids and the Great Sphinx together are quite out of this world!
29%  1   4 edstorm
Egypt 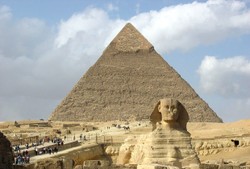 Egypt - A Journey to the Past

Take a journey back in time on a cruise of Egypt’s Nile River.
Loading ...
Error!