I'm a big Woody Allen fan, and this film confirms that I have good reasons to be. His conversations about love, relationships, infatuation, sex, and death are always engaging.

Woody Allen is an amazing screenwriter and director. Part of it is the subject matter: a good number of films seem to be a prolonged conversation he has with his audience about big things like love, relationships, infatuation, sex, and death. What I find amazing about the way he approaches these topics is that he seems to have found some answers early on, and yet he doggedly keeps at it, not letting go of the matters, as he fights both complacency and change. In this movie, Judy (Mia Farrow) tells Gabe (Woody Allen) that he "hates change." Gabe then says, not surprisingly, "Change equals death," and Judy, in what I believe is also Woody Allen's alter ego for a moment, retorts, "Life is made of change. If you don't change, you just shrivel up."

At first sight, his treatment of the above themes is very similar in all his movies, and yet this tension between asking, answering, and engaging with the answer again is always present, and makes his films alive. And then he has a whole set of tricks up his sleeve, a knack for making each one interesting (if not completely fresh) in its own way, whether it's simply by writing wonderful, deceptively simple lines each time (and giving them to the right actors, himself included), mixing the above core themes with others, just as important to him, as in Midnight in Paris (2011), or by going even further to delving it all into light-hearted comedy, as in Scoop (2006) or You Will Meet a Tall Dark Stranger (2010). In this latter film he complicates the whole scenario to an outlandish degree, and then, when despite everything we've bought into the story and wait for an ending, he ends the film abruptly, offering no resolution, exposing the make-believe.

In Husbands and Wives the plot lines are simple. Four people in two couples reevaluate their marriages and start exploring options freely. What happens is rather predictable and yet the acting, the dialogues, and the lines fed to the invisible cameraman are magnetic. The cast is truly superb -- with the possible exception of Gabe's 21-year-old interest, Rain (Juliette Lewis), whose performance was way too flat (I thought; others found her very convincing).

In retrospect, I'm tempted to say I would have wanted a little more literature in all the life presented -- in order to better understand a few of the references that are relevant to the characters. He does that more with Rain -- perhaps because in presenting her as a student of Gabe's, who also reads his manuscript, he felt he needed to give more background of this kind in her case. I guess his intuition was right after all. In this case, more literature would have undercut the realism of the piece.

The movie is rather sad, when you think of the two couples presented at the end of the film, what they've been through, and how they rationalize their relationship to themselves and to the cameraman. Allen, however, manages to make it all entertaining (if not downright funny), and keeps our interest through to the end (even though it is a tiny bit repetitive in parts) -- not in the least by the mixture of cinematic, theatrical, and naturalistic effects. A very enjoyable and real movie, with a light and yet very effective touch on some very powerful relationship issues.

I love Woody Allen. I somehow missed his last two movies. I hope I'll catch them on TV sometime soon. And yes, Sydney Pollack has a beautiful, expressive face :) Can't remember the voice exactly, so I'll take your word for it :)

I missed that one (Crimes and Misdemeanors). Will order it soon. Thank you, Mike, for your comment!

Nice review, Mira. Woody Allen has made some great films, Husbands and Wives, being one of them. If I had to choose one though, I would single out Crimes and Misdemeanors.

Hi Hollie, happy to see another Woody Allen fan has read my review. Thanks for stopping by! :)

I really like Woody Allen, although I'm pretty sure that I haven't seen this film. Must rectify now I've read your review. :) 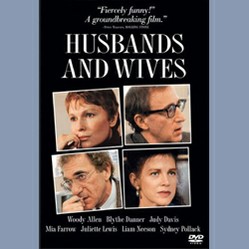 It was The End of the Affair (1999) and The Quiet American (2002), the movies, which got me really interested in Graham Greene. I can’t wait to read the books.
Loading ...
Error!