Intelligent design: how credible a theory is it?

Orthodox Darwinism is based on the belief that life developed by a series of random mutations that proved favourable because they enabled their possessors to adapt to their environment more successfully than their rivals and therefore leave more offspring. Intelligent design theory challenges this as it asserts that the life is not just the product of chance,but shows indications that there is a designing agent behind it. This they believe to be God. Intelligent design is to be distinguished from creation science, which attempts to base scientific conclusions on the first chapters of the Bible

There is a dispute raging between creationists and Darwinists, more specifically it is the Darwinists against creation science. The case is this: Darwinists believe that evolution occurred and was driven by natural selection over a process of billions of years. Creation scientists believe that science can be derived from the book of Genesis, which is a scientifically accurate tract,  that the world is not particularly old and that things were willed into existence by God without the need for evolution. I do not believe in creation science, and think it to be a scientific dead end.

It is important to disinguish between creation and creation science. The concept of creation refers to the very beginnings of the universe and its origins in the creative mind of God. As such it refers to an aeon long before life began, and therefore has nothing to do with evolution theory, which only deals with life as it exists upon earth. The religious doctrine of creation is found in many faiths and is told in creation myths. Some religious thinkers take these myths literally; others see them as symbolic and look to science for a more accurate account of the details of what happened. Creation science is a specific theory of the relationship of the Bible text to science and is specific to Christianity, particularly its evangelical variety. There is an Islamic equivalent to be found among those who insist on finding scientific truth in the Quran. You can believe in creation by God without accepting creation science.

Intelligent design is not to be equated with creation science, though many secularists wrongly  insist on making the equation. It is the belief that the universe can be legitimately construed or interpreted as showing indications of having been the product of an intelligent designer. Intelligent design theorists are not wedded to a literal view of Genesis and do not attempt to find scientific truth therein. They are not necessarily biblical literalists. Intelligent design is a  philosophical theory rather than a theological one.They are not necessarily opposed to evolution and are apt to believe that evolution theory of some kind best describes the process of development of life, but they are more open to seeing purpose and design than the orthodox Darwinian is.

The Darwinian theory of evolution is that random mutations in animal genetics give rise to new varieties. It is the case that sometimes these mutations allow animals to better adapt to their surroundings than than the unmutated do. This gives them a competitive advantage, so they leave more offspring than their less fortunate neighbours, which may diminish or die out. Mutations have to occur in a specific situation. Thus the zebra was a member of the horse  family that mutated to acquire black and white stripes. These stripes proved good camouflage in African grasslands and so the species acquired an advantage. Had the same mutation arisen in the Arctic the survival advantage would not have been good, as the advantage there is to white fur. This is the theory of natural selection, and it works well as an explanation of evolution. It is clear that evolution happened and that natural selection is the most effective mechanism for it. However, there  are philosophical problems to the theory that might inspire rethinking it to some degree.

To say that the mutations are random is not scientifically provable. Random mutations will most certainly occur, as they seem to do in all species, but to say that every mutation in the several billion year history of evolution was random is not a scientifically justifiable statement. To  legitimately make it we would have to inspect every mutation in the several billion year history of life on earth. This is not possible. This does not discredit random mutation, but it shows that the statement that all mutations are random is not a scientific statement based on observation, but a judgment based on inference. Universal statements are almost impossible to make and easy to disprove by one counter example. So far no undeniable counter example has been found, but if one occurs then the theory will need to be rethought. This would not mean going back to creation science, which has no credibility at all, but it would mean an adaptation.

Exponents of chance have been assertive in their claims that randomness is a sufficient explanation of the origins of the universe, after all it is a good way of getting rid of God. But in recent years some strange coincidences have been discovered. It seems that several physical constants are exactly right for the development of intelligent life. Take the charge on the electron.Had it been slightly more energetic, the universe would have burned up in ten million years; had it been slightly smaller galaxies , stars and planets would never have developed. Apparently several other constants are similarly exact, and it seems as if the universe was fine tuned to the development of intelligent life.

There are implications. If this is so the universe is the result of a great mind that is responsible for the order therein, and this includes evolution. In support of this many have observed that the chance of even a single cell originating by random mutation is very small, and add this to the fact that billions of changes have happened in the course of evolution makes the possibility of totally random occurrence risible.Anthony Flew,once an atheist, came to the conclusion that an intelligent designer is more likely than is the possibility that the universe is a result of purely random occurrence, and became a deist. This is a person who believes that there is a deity who creates but does not intervene, and he incurred the spleen of Richard Dawkins for his pain.

Intelligent design does not negate natural selection, as it is very clear that natural selection is a good explanation, but not the only useful one. That the universe took time to develop and life took billions of years to evolve to where it is does indicate that any deity has to work with the material. The idea of a deity who just clicks his/her fingers and says, "That's another mountain range!" is unbelievable. A deity who uses natural selection and evolution, gently manipulating the system towards a goal, but not being able to just click his fingers is an attractive one.

We must realize how little we know for certain. When speaking of creation and evolution, we are delving into the distant past beyond the memory or record of any human. When speaking of God or ultimate reality we are standing on the shore of an ocean of mystery, and religious thinkers are deeply aware that he/she is beyond their limited comprehension. Little can be proven, we can at best come up with credible theories, but we must be aware that we can be wrong, no matter how precious our beliefs are to us. A combination of curiosity and intellectual humility is in order for us all. The theory of intelligent design presents a challenge to Darwinian orthodoxy, but not to evolution itself. Evolution is not a fact, it cannot be, as facts have to be observable, and most of the events in evolution are gone and past observation. Nevertheless, the evidence for evolution is overwhelming. But the explanation of evolution is controversial and still to be decided.

The image is of a bird near some leaves.

The Steiner observation is consistent with Stuart's view, but it does not settle the argument. Much more work needs to be done in the settling of the question.

frankbeswick, Thank you for product lines and practical information.

The image to the left of your title appears dark, with ethereal, light, slight slashes in the middle. What can it be of?

In particular, I like the notion of intelligent design. Rudolf Steiner maintained that there are limits to what we can understand about God's intelligent-designed nature and world.

Would not David Stuart mentioning in Dangerous Garden that human-made quinine is not as effective as naturally occurring, 100 percent-effective quinine support the Steiner observation?

I was not aware of Wilson's book on word studies, so thanks for that.

Biblical literalism is a problem from the mediaeval age that has survived into the modern one. It is not widely known that St Augustine in the fifth century knew that the biblical days of creation were symbolic and not to be taken as literally true. Origen, the greatest biblical scholar of the early church, was committed to an allegorical explanation of much of the Old Testament.

Some nice arguments. Its interesting to note that the idea that life was created in only six literal days is a wrong interpretation of the Bible.

The Hebrew word yohm, translated “day,” can mean different lengths of time. Among the meanings possible, William Wilson’s Old Testament Word Studies includes the following: “A day; it is frequently put for time in general, or for a long time; a whole period under consideration . . . Day is also put for a particular season or time when any extraordinary event happens.”1 This last sentence appears to fit the creative “days,” for certainly they were periods when extraordinary events were described as happening. It also allows for periods much longer than 24 hours.

In Genesis 2:4 all the creative periods are called one “day".

This is an excellent defense of creation and it's so well written. It's true that there is a lot we don't know. But, there are a few questions the evolutionists can't answer, such as why we suddenly stopped evolving and why we never see one species giving birth to another. It doesn't happen. Everything in the universe is so orderly, that an intelligent being (God) had to design it.

Interesting article and some good points raised. Thanks for sharing. 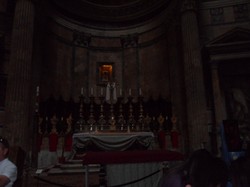 Discovering Intelligent Design: A Journey Into the Scientific ...
100%  30   15 frankbeswick
Christianity