Islander: a journey round our archipelago. A Review

Islander, by Patrick Barkham, makes an interesting and enjoyable read

In Islander Patrick Barkham journeys through the archipelago that is Britain, and does so by selecting ten islands of progressively diminishing size and population selected from isles about which he, a travel writer, had never written before in his copious writings as an author or journalist. The originality of this book is to follow up the lives and ideas of island enthusiast, Compton Mackenzie, and Mackenzie's friend D,. H. Lawrence, who wrote "The Man who Loved Islands,a short story detailing the decay of an island enthusiast.

Picture of Tresco Isles of Scilly, courtesy of Films42 .

The Theme of the Book

The unique character of this book is that it is an exploration of the presence and significance of islands in literature, particularly through the writings of D.H. Lawrence, who wrote the short story, The Man Who Loved Islands, and the biography of Lawrence's friend and fellow writer, the island enthusiast, one might say fanatic, Compton Mackenzie, whose prolific literary output is almost forgotten save for his Scottish comedies Whisky Galore and Hunting the Fairies. These two and the interplay of their ideas  and stories  perform the  role of a unifying presence that binds the book together as a working piece of literature.

Mackenzie was a failed actor turned to writing, but his life was dominated by his obsession with Scottish identity and his fascination with islands, of which he owned several over the years, an obsession that was to lead him to the edge of bankruptcy and to ruin his marriage. The one island of which he made a success to some degree was Barra, the experience of which led to his most successful work,Whisky Galore,  which made a hilarious tale about the wreck of the SS Cabinet Minister, based on the true tale of the wartime wreck of the SS Politician, laden with thousands of bottles of good Scots whisky destined for the USA and how the islanders "saved" the whisky!

Lawrence was always sceptical of people who retreat to islands and penned the tale of a man who was so obsessed with them that he gradually retreats to progressively smaller islands and in the process withdraws from relationships until he goes mad and dies. For Lawrence the isolated island is a metaphor for the individual's retreat into his/her ego and the self-destruction that it causes, as well as the destruction of relationships.

Barkham makes the reader question several things about themselves. The main question that he poses is whether an obsession with islands is a positive thing or whether it is a pathological matter, a way of withdrawing from relationships and responsibilities. But to counter this he tells much that is positive about the island cultures  that he studies. Barkham also makes us question our own obsessions, whatever   they are, and one obsession that he cites is the writer's yearning for literary recognition. As  a writer himself he sadly notes that few nowadays read Mackenzie's supposed masterpieces of serious literature, and he wonders who will read his own works in the years to come.

The author is interested in islands, as he is in coastlines,  but not obsessed with them, and he evinces no desire to retreat to one or to dwell there. Nor does he idealise island living, as he recognises its problems, particularly those of a social and economic nature.

Beginning with the Isle of Man, the largest isle in the book and a partly independent country in its own right, he proceeds through the Scottish isles of South Ronaldsey, Barra and Eigg, before turning to the Irish Rathlin. We then read the sad tale of Alderney, the channel island used by the Nazis as a concentration camp, then the smaller St Martins in the Isles of Scilly before returning to the once inhabited Scottish isle of St Kilda and the sad account of its abandonment. The book finishes with Bardsey, the one time sacred isle off North Wales, before finishing with two uninhabited English islands off  the south east coast of England.

Each of these ten islands is discussed in full, with its unique history given and its culture sympathetically presented. As a Briton, I realised from reading this book how little I knew of the  Isle of Man, an island state only about a hundred miles from my home in North West England, and this book has gone some way to rectifying this deficiency in my knowledge.

The book gives material drawn from history, archaeology, geography, literature, politics science and religion. With my religious interests   I was particularly interested in Bardsey, the Isle of Ten Thousand Saints, off the Welsh coast, guarded by fierce tides and currents, but still inhabited by a warden and his family and several hermit nuns. I was curious about the way in which places acquire a spirit, character of presence, which is perhaps the trace of the deeds done there. The book gave me some room for reflection on these matters, though answers are in short supply.

Islander makes us reflect on the negative effect of the dominant urban culture on more traditional local cultures and how the western economic system erases local identities and local cultures. Islander poses a challenge to us all as to how we respond to this erasure.

Reading the book led me to the conclusion that islands are interesting for the human events that happen on them. Even the two uninhabited isles at the end of the book have a human history whose traces linger within their shores. Without this history there would be some flora and fauna to discuss, but as these isles contain no unique species we need not say much. Humans make the world interesting to a great extent.

Islander is a well-written book that will give great pleasure to the thoughtful reader. It was a delightful Christmas presence from my second son. I read it all with delight and commend it to the reader.

I am surprised that the film was shot with Irish landscapes, as the two lands are dissimilar. But there are great sea cliffs in Ireland. The highest is Croaghaun on Achill Island in Mayo, above where I once camped, then Slieve League [Liag] in Donegal; after this come the Cliffs of Moher in County Clare. Other areas less towering, but where mountains are close to the sea are in County Kerry in the South West. All the four areas that I identify here are in the West of Ireland, but there are smaller cliffs on the north coast near the Giant's Causeway. The Irish rocks most similar to the rocks of Iceland are the basalt landscapes near the Giant's Causeway. Northern Ireland is proving attractive to film makers [Game of Thrones] so I would not be surprised if films were shot near there.

Revisiting your wizzley caused me to ponder what Ireland and United Kingdom islands -- including and beyond the 10 referenced here -- look like.

Ragnar Jónasson is releasing the English version of the second of his stand-alone novels at the end of June. So I looked to Vikings television series to get me thinking along Icelandic geographical lines, only to find that it's filmed in Ireland!

Some of the landed scenes and some of the water views of island coastlines make me think of Iceland, where I've been.

Would Ireland look toweringly mountainous along its coastlines, or, if not, would its islands look that way?

The number that you quote is accurate, but I suggest that whoever was the author of that saying thought that all those buried there were saints. St Elgar, a Saxon who was enslaved in Ireland, but who escaped dwelt there. Monks' graves are all over the island, but monastic graves are unmarked as monks regard the body as dispensable.

When the nuns leave nothing will happen, but when a warden leaves the trust who manage the island will simply appoint another

frankbeswick, Thank you for the backstories and products. Do you know who are the saints buried there and where? (An article, Edge of Wales Walk Umylon Cymru, referenced in the Wikipedia article on Bardsey Island mentions the number as 20,000. Is that an error or is there some disagreement on numbers?) What will happen to Bardsey should the hermit nuns and the warden and his family die, move or retire?

I am not quite certain of what the meaning of the word bailiwick, but Elizabeth II is referred to as bailiwick on the Guernsey coinage. Aldemey uses Regina, as do several other places.

Slight counting error. Three isles from the eleven are English, four are Scottish, one is Welsh, one Northern Irish, and there are two others.

Don't confuse the Isles of Scilly,which are part of the English county of Cornwall and in the Western Approaches, with Sicily. The Isles of Scilly have nothing to do with Sicily. All isles mentioned in the article, but two are in the UK, though only the two small ones are English. Others belong to Scotland, Wales and Northern Ireland.

Man and Alderney are not UK. The Isle of Man is a crown dependency, which makes its own internal laws, but is dependent for foreign policy on the UK. The queen is Lord of Man. Alderney is in the Channel Islands, which are three crown dependencies Guernsey, Jersey, Sark. Guernsey includes Alderney. They are the last remnants of the old Duchy of Normandy, and they hail Elizabeth not as their queen, but as their duchess.

There is geological evidence that in Roman times the Scillies were a single isle that the Romans called Insula Scillonia, but sea level rise swept away much land, leaving the fragmentary archipelago that we now know.

By the way, Scillonians don't like their home called the Scilly Isles [because Scilly is pronounced silly!

The word Scilly is related to skelly, and skerry, words meaning a cluster of rocks.

It seems from reading this that all but one island is English, or at least in the Commonwealth. Yet one is Sicilian. I am curious how one island is there but does not fit the pattern one might assume.

Sounds like your Christmas dinner must have been delicious and fun. 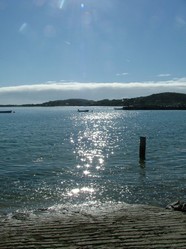