Isle of Wight for Visitors

It's a small island but packed full of things to do and places to see. These are the essential places to visit and things to do on this beautiful isle.

Queen Victoria refused to move from her home on the island after the death of her husband, famous writers flocked here to enjoy its ambiance and fair weather, among them Dickens, Keats, Longfellow and Tennyson. It hosts the worlds most famous Regatta, Cowes Week, and more than half the island is designated an area of outstanding natural beauty.

Alfred, Lord Tennyson, said the air was worth sixpence a pint, and Charles Dickens was moved to write from his home in Bonchurch “It is the prettiest place I ever saw in my life.”   Others were equally lavish in their praise of the island that is often described as "the jewel in the Solent", the Solent being the stretch of water between the coast of S.E. England and the island, famed for its currents which makes sailing such an exhilarating sport in these waters.

Tennyson bought Farringford House in Freshwater where he entertained dazzling figures like the great man who united Italy, Garibaldi and Thackery, Swinbourne, Longfellow, Keats, Darwin, Lewis Carroll, Turgenev, D.H. Lawrence and Virginia Woolf were others who were seduced by the island's charms.

Queen Victoria, Prince Albert and their children lived a happy family life in their Italianate villa at Cowes, far from the stress of London life, and their home, Osborne House, remains much as it was in the mid 19th century, the interior still with the original furniture,cradles, desks, casts of the young royals' hands, photographs, china and plate. Very much a family home, it is one of English Heritage's most important royal residences and open to the public.

But the island has its mysteries and its modern lifestyle as well.  Historian Jan Toms has written, “Behind the downs and bays, the thatched cottages and country pubs, lurks a long and sometimes turbulent history. The Romans invaded, the Normans conquered, Kind Charles I came seeking refuge and Queen Victoria craved privacy”.   Nowadays the island welcomes visitors to its shores as tourists, not conquerors, and its reputation as one of England's finest resort islands is second to none

From fishing and farming the island developed the natural spin-offs of boat-building, sail making.   During and after the second world war its fortunes seem to settle around the industrial scene as it began to manufacture flying boats, produced the world's first hovercraft, tested and developed Britain's space rockets and then in the late sixties, developed and manufactured The Islander, the best-selling commercial aircraft produced in Western Europe.

But things change and nowadays it lives mainly on tourism, Cowes Week Regatta and the Music Festivals that punctuate the season. Although it may never again play host to the reigning monarchs of four nations as it did in 1909, the royally rich with their billion pound yachts flock to the island during Cowes Week.

Equally popular are the music festivals, the Isle of Wight Pop Festival, a follow-on from the famous Woodstock in the USA and the Islands very own Festival the following 1970 at which Jimmy Hendrix, The Doors, Joan Baez, and just about every famous rock star appeared.  Bestival in September, and the International Jazz Festival and the Blues and Folk Festival gain fans every year.  Away from music, the Isle of Wight 2-day Garlic Festival attracts visitors from all over Europe to enjoy the fun of the fair and buy garlic products of every imaginable type, including garlic ice-cream and garlic beer!

There are wonderful sandy beaches all round and a few stony beaches that provide rock-pools for the toddlers who enjoy fishing for crabs.  Dinosaur fossils are regularly dug up at low tide on some of the beaches (the island is also known as Dinosaur island because of the numerous fossil finds. The magnificent crescent of Sandown Bay which incorporates Sandown and Shanklin is hugely popular as not only does it have safe swimming off its golden sandy beach, but facing the sea at Sandown is the island's Zoo and Tiger Sanctuary where rescued tigers are rehabilitated.  Just a few paces down from the zoo is the custom built Dinosaur Museum with its renowned dinosaur collection.

The picture postcard thatched roofs of Shanklin Old Village and the quarter mile long Shanklin Chine, a deep narrow ravine leading to the sea, formed over the last 10,000 years by water cutting through soft sandstone,can be reached by a walk along the beach between the two towns, a walk along the cliff, or a short bus ride. Sandown and Shanklin were both involved during World War II in transporting petrol to France for the invasion of Normandy via PLUTO (Pipe line Under the Ocean) one of the great successes of the war. A video of the story can be seen at the Heritage Centre in Shanklin Chine.

Brading lies inland from Sandown and is worth a visit to see the well preserved 16th and 17th century houses in the High Street one of the finest 3rd century Roman villas in the country, with beautifully preserved mosaic floors and a charming Roman garden.  Tje Roman Villa has an excellent restaurant on site and makes a perfect spot for lunch.

Newport, the capital of the island and a fine market town, is the stopping point for Carisbrooke Castle, from which Charles I attempted to escape in 1647 before he was transported to London and beheaded.  It is the most popular castle on the island, offering freedom to roam the interior, walk the battlements and visit the celebrated donkeys who draw the water from the well.

Jimmy Hendrix, one of the Stars of the 1970 Pop Festival on the Isle of Wight

Best things to do on the Isle of Wight

All water-sports are catered for, from surfing, swimming, kayaking and snorkelling to sailing and learning to handle a boat properly.  The Isle of Wight Visitor Guide gives full details.

Walking on the miles of coastal paths and bridle paths.  The island has more paths laid aside for walkers than any other part of the UK.  Try the walk that inspired Lord Tennyson as he wrote The Charge of the Light Brigade, and walk the Tennyson path with its marvellous views.

Eating out at the many famous pubs.  Good food is a given on the island and most of the produce will be locally sourced, from meats to vegetables and salads.

A good transport system will take you round the island in comfort.  Get a bus timetable from the bus station at Ryde, from the Tourist Offices or from some newsagents.

Ice-hockey and skating at Ryde Stadium, Horse Riding at various equestrian establishments, trekking with llamas at the llama farm (must be booked in advance), or just relax on a beach with a good book.

Many Norman Churches on the Island, This is one of the best

I'm sure you'd love it. I did a 7-page article on it for Discover Britain last year and I really enjoyed travelling around it for research. Am about to start on another article for the glossy magazine Britain, taking a different view of it, so here I go again, walking, cycling and motoring when the legs get tired! 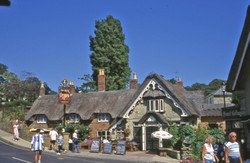