Standing in your modern kitchen trying to create a recipe that was perfected before refridgeration, gas stoves, microwaves and store bought items can be done if you don't take short cuts or 'substitute'. Somethings can't be replaced, some can, but depending on what you are using you might get something close but not with that true 'yard' flavour.

What You Need To Know

Jamaicans use Coconut Oil.  It was made, (and is still made) by grating a pile of coconuts, and then squeezing out the liquid through a cloth.  This liquid is boiled until the oil separates from the custard.  There will be a fluff at the top (the custard) which is enjoyed by children.  The remainder is pure coconut oil.

Coconut oil is used in just about everything.  That and coconut water.  There's a 'cheat' for coconut water.  You can buy grated coconut, (it is usually in a supermarket with other baking condiments) put it to soak in water, then squeezed through a cloth.

You use coconut water to boil food, especially rice.  Many times the reason why your food doesn't taste 'right' is because you used tap water, not coconut.

Many of the most beloved Jamaican dishes contain elements which are, in their natural state, poisonous.

Ackee is poisonous.  Picked from a tree and not carefully cleaned, it can kill you.    Buying tinned ackee is probably what you need to do. 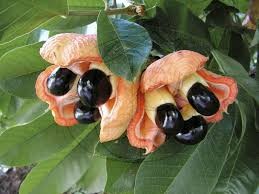 Bitter Cassava is poisonous.  The root was soaked and then the water used by the Taino (the real name for the natives which have wrongly been called 'Arawaks')  to stupefy fish.

The water you soak grated cassava in can kill you. It must be discarded.   Buying pre-made Bammie is what you need to do, unless you know what you are doing.

Jamaicans fall into two categories, those with Scottish blood who can't abide pepper, and everyone else who eats pepper as if it's candy.  The amount of pepper (talking about Scotch bonnet here, as well as jerk seasoning) normally used is probably far too hot for the benign pallet.

If you love pepper you'll love jerk seasoning, if you don't, avoid everything but porridge.

Jamaican cuisine is a mix of Indian (that is from India) African (West African) English (what was fed to slaves) Taino (the native inhabitants of Jamaica) and Chinese (direct from China).  The way Curry is used is significant.  It is not put into anything.  It is used on what is to be curried.

For example, Curry goat is 'curried' goat.  The goat is covered in curry, put in a pan and left over night. In the morning, a lot of the curry is wiped off before frying in coconut oil (with various other seasonings).  People who 'sprinkle' curry on food are not cooking Jamaican. 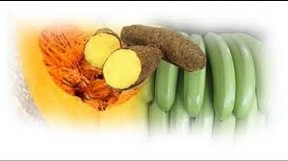 Country people considered rice 'town food' and rarely used it, save for the Sunday rice and peas.

Food is the generic name for starches; this can be yam, banana, breadfruit, sweet cassava, potato, sweet potato, etc.  Country people cook a great deal of food, because they grow it.

People who live in town will eat rice at almost every meal.  It is always boiled in coconut water. 'Peas' are beans, usually gungo peas (which are beans).  Gungo peas, like ackee are poisonous, so one soaks them, then throws off the water, washes them, then cooks them.

A word about Tomatoes

Almost everything comes with slices of tomato.  It is one of the most used vegetables.  It is used in recipes and fresh slices decorate plates.  You will always find tomato on a plate, (except porridge). If there aren't tomato slices on a plate people will wonder about you.

Everything takes 'forever' to prepare correctly.  If one is serving curry goat, the goat is killed, butchered, then set in its curry over night, (usually with a rusty nail), which is not eaten, (of course) but purists will always put that nail in that pot overnight.

Slow cooking is how it is done, so that jerk chicken, for example, is chicken which has been sitting in jerk for a while and then cooked slowly in a covered drum; (this is usually an old oil drum, cut in half with a grill at the bottom on which the chicken is placed, covered with jerk seasoning and cooked for hours).

There is a soup called Pepper Pot which is virtually immortal.  What is not finished today is the basis for tomorrow.  Considering the amount of pepper, it is not going to go bad.

Food is to be filling and to last, and to be eaten slowly and enjoyed.

thank you very much

I'll try rice with coconut water. It sounds very good!
This was all very interesting. Welcome to Wizzley!

I'm so glad you liked it

Fascinating! I believe the coconut oil and water are essential for authentic flavor. I'll have to try that. And I didn't know tomatoes were served with everything - that's not a problem, we love tomatoes! 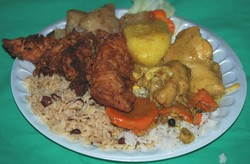 Chestnut Cake with Chocolate Whipped Cream Frosting is a comfort food recipe which deliciously celebrates the autumnal harvest of chestnuts in the Czech Republic.
Loading ...
Error!