James Carville gained fame as the showrunner for Bill Clinton's 1992 presidential election. Who is this guy, and where did he come from?

"I was against gay marriage until I realized I didn't have to get one."
- James Carville

Politics aren't new. Folks have been running for one office or another for centuries. Normally, during a political campaign, the people running for office are the standouts. Occasionally, however, someone behind the scenes manages to capture the public's eye.

The political arena has its share of celebrities. Often, these folks are the ones on the television giving analysis or being asked for their opinions. Folks like Glen Beck, Rachel Maddow and even Rolling Stone's political analyst Matt Taibbi have gained fame and fortune supporting or deriding candidates and even political incumbents.

If you've paid any attention to politics, especially the Democratic Party, since Bill Clinton's 1992 presidential campaign, you've probably seen or, at the very least, heard of James Carville. You most likely know that he has something to do with politics, but most people don't know exactly what kind of role he fulfills.

Who is this charismatic guy with the Louisiana drawl, and where did he come from?

Before the fame and fortune... 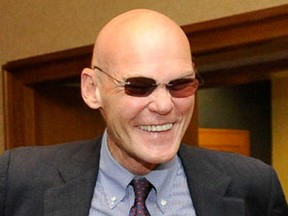 James Carville was born on October 25, 1947 in Carville, Louisiana, a town named for his grandfather, Louis Arthur Carville. He is the oldest of eight kids and is of Cajun descent.

After graduating from an all-Catholic high school, Carville earned a doctorate from Louisiana State University before enlisting in the Marines for two years where he worked his way up to corporal.

During the 1970's, he had a fairly successful job as a lawyer in Baton Rouge and also earned a living as a high school teacher before turning his attention to politics, where he was trained as a campaign consultant.

His first big political campaign was Bob Casey's successful bid for the governorship of Pennsylvania in 1986, followed by another success with Zell Miller in Georgia in 1990. He found his ultimate calling, however, with another charismatic politician named William Jefferson Clinton.

Who wants to rule the world? James Carville can help you do it. 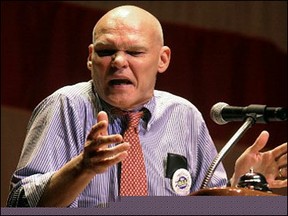 “You suckers do realize that anyone can add a quote, right?”

James Carville and Bill Clinton first met during the 1991 Senate race for Pennsylvania Democrat Harris Wofford. The two Southern Democrats became friends of a sort and it seemed natural for Clinton to tap Carville to head up his own 1992 run at the presidency.

That election was one of the first times that a scandal touched a presidential candidate and the candidate fought back. A woman named Ginnifer Flowers came forward during the last days of the election to state that she'd had an inappropriate sexual relationship with Bill Clinton. This wasn't the first time that a politician had been confronted with this kind of scandal, but the way it was handled became a template for those that came after.

Though many considered it a dirty tactic, the Clinton campaign, under Carville's instruction, took the fight back to Flowers. She was very publicly discredited and the audio tape that she stated was proof of her twelve year illicit association with Clinton was believed to have been edited. The phrase "cash for trash" was thrown around, and the Clintons and Carville made it known that they believed that Flowers had been paid to come forward with a completely untrue story to derail Clinton's presidential ambitions.

Eventually, the scandal died down, Clinton won the presidency and Flowers ultimately attempted to sue Carville and President and Mrs Clinton for defamation. Her suit was thrown out of court.

During this election, Carville became a celebrity in his own right (as was George Stephanopoulos). He was voted the Campaign Manager of the Year by the American Association of Political Consultants. There was a documentary about this election called The War Room that was nominated for an Oscar and did a great job of documenting the behind the scenes drama of the election. It was really the first time that the American public had gotten to see what actually happens during an election.